TORONTO — For once the Blue Jays bats got to Red Sox ace Chris Sale. Unfortunately for Toronto, the Jays couldn't keep Boston's offence in check in a 5-4 loss at Rogers Centre on Thursday night.
Apr 26, 2018 11:37 PM By: Canadian Press 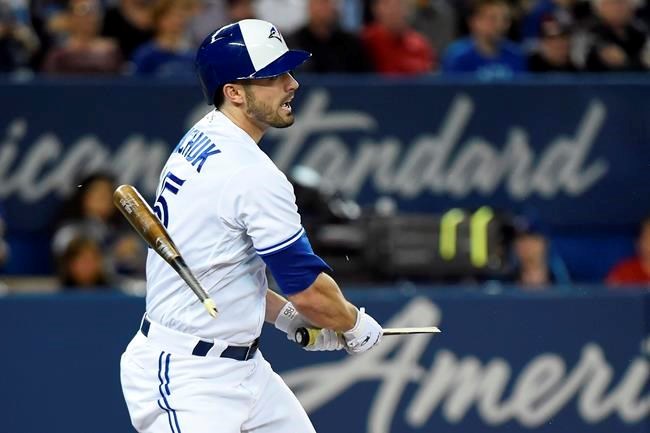 TORONTO — For once the Blue Jays bats got to Red Sox ace Chris Sale.

Unfortunately for Toronto, the Jays couldn't keep Boston's offence in check in a 5-4 loss at Rogers Centre on Thursday night.

Sale (2-1), who allowed three runs on four hits while striking out four and walking two, had pitched 23 scoreless innings in Toronto entering the start.

"He's tough, he's one of the best pitchers in the game and we scored some runs," said Blue Jays starter Marco Estrada. "The hitters did what they're supposed to do, they did their job and I basically let them down that fifth inning.

"It's unfortunate. Could've been a much better night for us. Should've won today."

J.D. Martinez hit a three-run homer in the fifth as the Red Sox took two of three from the Blue Jays. Andrew Benintendi delivered an RBI double and Rafael Devers drove in a run on a sacrifice fly for the Red Sox (19-5).

Estrada (2-2) went five innings, allowing five earned runs on eight hits while striking out five and walking one. The right-hander got Mitch Moreland swinging with a 90 m.p.h. fastball to lead off the second inning to reach 1,000 career strikeouts.

"I thought his stuff was good," said Blue Jays manager John Gibbons. "He was kind of in and out. I thought he pitched some guys really tough.

"Then one of their stars got us. That's what they do. I think he left it up and hit that line drive to right field, but those are the kinds of things we'll do too."

Travis tripled and later scored in the seventh on a Kendrys Morales ground out, but that's as close as the Blue Jays would get to retaking the lead.

"I'm happy I didn't have to round third and go home because I would've needed someone to carry me," joked Travis who has had knee issues in the past. "It was nice. Long run, feels good. I made it."

Toronto got to Sale early as Pillar's sac fly scored Teoscar Hernandez from third, giving Toronto 1-0 lead after one. Travis doubled the Jays lead in the second, taking Sale's 1-1 fastball into the second deck for his first home run of the season.

After Benintendi snapped an 0-for-16 slump with an RBI double to get the Red Sox on the board in the third, Smoak took Sale's 0-2 pitch deep for his third home run of the season to give Toronto a 3-1 lead.

"It was definitely a dogfight from the get-go," said Sale, who improves to 5-1 in seven starts at the Rogers Centre. "Giving up a run in the first three innings is tough."

Craig Kimbrel pitched a scoreless ninth for his seventh save of the season.

Red Sox shortstop Brock Holt left the game in the third inning with left hamstring tightness after pulling up rounding first base. Holt was replaced by Tzu-Wei Lin.

Notes: Toronto will send RHP Marcus Stroman to the mound on Friday when they open a three-game series against the Texas Rangers. … On Thursday Major League Baseball denied Red Sox RHP Joe Kelly's appeal of his six game suspension for hitting Yankees' Tyler Austin on April 11.