VANCOUVER — Bo Horvat watched in awe as players across the NHL filled the net over the last four days. When the Vancouver Canucks finally kicked off their season, the 22-year-old centre got in on the action.
Oct 8, 2017 2:34 AM By: Canadian Press 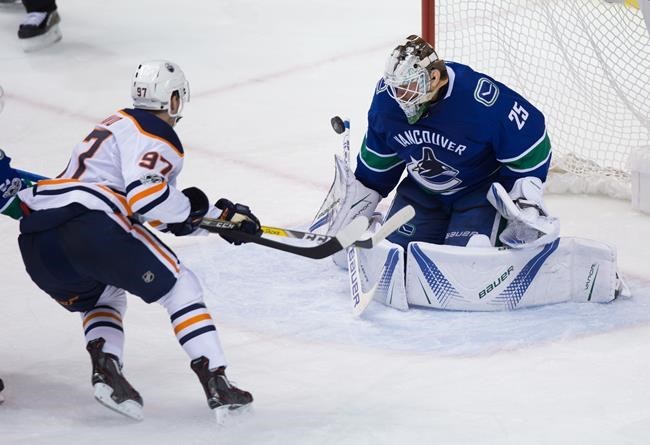 VANCOUVER — Bo Horvat watched in awe as players across the NHL filled the net over the last four days.

When the Vancouver Canucks finally kicked off their season, the 22-year-old centre got in on the action.

Horvat scored twice and Jacob Markstrom settled down to make 33 saves after allowing a goal on the game's first shot as the Canucks downed the Edmonton Oilers 3-2 on Saturday night.

Horvat led the Canucks with 52 points in a forgettable 2016-17 campaign despite failing to score a goal over the final 17 games, but that didn't deter the club from signing him to a six-year, US$33-million contract before the start of training camp.

And he showed exactly why many view the Rodney, Ont., native as the future face of the franchise.

Brandon Sutter also scored for Vancouver, and played a key role in shutting down Oilers superstar Connor McDavid, who was held off the scoresheet for the first time in 16 games dating back to last season.

Kris Russell, with a goal and an assist, and Ryan Nugent-Hopkins replied for the Oilers, who opened their season with a 3-0 home victory Wednesday over the Calgary Flames on the back of a McDavid hat trick.

"They played a scrappy, hard game," said Edmonton head coach Todd McLellan. "By the time we figured that out it was a little too late."

Cam Talbot allowed three goals on seven shots before being lifted early in the second period in favour of Laurent Brossoit, who stopped all 19 shots he faced in relief.

"We made a large amount of mistakes," added McLellan. "Their chances, not only were they grade-A, but they were triple-A."

Edmonton has big expectations after making the playoffs last year for the first time since 2006, while Vancouver, which picked up its first regulation win over the Oilers since Nov. 19, 2014, is in full rebuild mode coming off a 29th-place finish.

With his team up 2-1 after the opening period, Horvat scored his second of the night 32 seconds into the second when he won a puck battle behind the net before his wraparound shot somehow snuck between Talbot's pad and the post.

Brossoit made a couple of big stops after Talbot got the hook, including a save on Sven Baertschi on a partial breakaway that kept the score at 3-1 after two.

Markstrom denied Zack Kassian with a nice glove save on a 2-on-1 early in the third before also stopping Adam Larsson on another odd-man rush.

Edmonton got to within one on the power play at 8:09 when Patrick Maroon fed a no-look pass in front to Nugent-Hopkins, who made no mistake past Markstrom.

The Oilers had a great opportunity to tie it after Sutter took a high-sticking penalty with under six minutes to go, but the Canucks had the best chance on a Markus Granlund breakaway that Brossoit stopped.

Edmonton kept coming, and with Brossoit on the bench, Markstrom shot out a pad off a scramble to preserve the victory with under a minute to go.

"It was just desperation at that point," said Markstrom. "We worked hard for this win and I thought we deserved it."

Markstrom, who came to North America eight years ago, is finally a No. 1 goalie in the NHL, but had a nightmare start to Saturday as the Oilers opened the scoring just 1:08 in when Russell snapped a puck from the top of the circle through a screen.

"I have to have that," said Markstrom. "At the same time, I've waited too long for me to get rattled by that.

"Midway through the first I felt like we all got into the game."

That was indeed the case as the Canucks responded on the power play at 7:35 when Horvat powered past Matt Benning before chipping a shot shortside on Talbot.

Vancouver, which didn't get its first lead of last season until the fourth game, then went ahead 1:54 later when Russell coughed the puck behind his own net right in front to Sutter, who beat a surprised Talbot to send the Canucks on their way.

"We beat a pretty good team," said Horvat. "We were ready for them."