MONTREAL — Patrice Bernier goes back 17 years when the topic turns to the Montreal-Toronto soccer rivalry.
0
Jun 20, 2017 3:31 PM By: Canadian Press 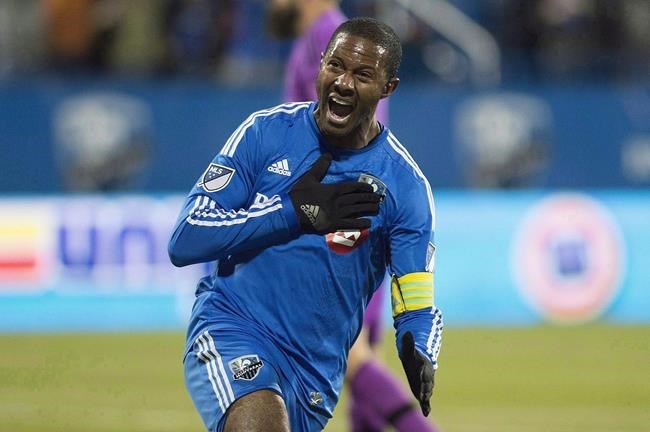 MONTREAL — Patrice Bernier goes back 17 years when the topic turns to the Montreal-Toronto soccer rivalry.

The next will come Wednesday night when TFC visits Saputo Stadium for the first leg of the two-game Canadian Championship final.

"In the A-League (circa 2000) we played against the Toronto Lynx a lot," said 37-year-old Bernier. "I know that there were a lot more Toronto guys on their side and a lot more Montreal guys on our side, so there was no love when you played their team.

"I remember them a lot. Adrian Serioux, Lynden Hooper, Marco Reda. Those guys came up with the Lynx. It just carried over for me (in MLS). The name might have changed but TFC or Toronto (Lynx), it's the same for me."

The rivalry was a natural when Montreal joined MLS in 2012 (Toronto had already been there since 2007), but it only really took hold when they started facing each other in playoff games. TFC's first-ever post-season game was a lacklustre 3-0 loss in a first round knockout game in Montreal in 2015.

Last season, it went through the roof as the Impact won the opening match of the two-legged conference final 3-2 before 61,004 at Olympic Stadium only to lose 5-2 in the return match before a sellout 36,000 at BMO Field, with TFC scoring two goals in extra time in the highest-scoring MLS playoff series ever.

Toronto lost the MLS Cup final to Seattle on penalties, but Greg Vanney's squad is back with a vengeance this season, leading MLS with a 9-2-5 record. Montreal was slow off the mark but has levelled its record at 4-4-6 and is 2-0-2 in its last four.

"I like that rivalry aspect, I like that it's a little bit unfriendly," said Vanney. "It becomes you and your team, and us against them.

"And I think that's what it should be about. That's why these rivalries are so special. So I'm not discouraged in any way about having to go there and play a game."

The return leg is June 27 in Toronto.

At stake is the Voyageurs Cup, which Montreal won seven times before joining MLS and twice after. Toronto won five times, including last year. There are also bragging rights, which may be as big a factor as skill or tactics in this matchup.

"I don't really say hate but I know that my focus and attention when the name TFC pops up is very high," said Bernier.

Toronto players remarked this week how much they despise the goal bell at Saputo Stadium that is rung each time the home team scores.

Both teams want the trophy, especially because it gives the winner entry into in the CONCACAF Champions League, although if Montreal wins it will also have to win a one-game playoff in Toronto later this summer due to a scheduling change that deprived TFC of this year's CONCACAF berth.

Toronto is in win-now mode with designated players Sebastian Giovinco, Michael Bradley and Jozy Altidore in their prime, backed by a strong supporting cast, and feel they can go far in CONCACAF. Montreal is eager to get back in after making a run to the final in 2015.

Vanney has lineup decisions to make because his club has a league match Friday night against New England, making for two games in three nights. He confirmed only that Clint Irwin will continue his Canadian Championship run in goal.

The Impact play Saturday in Columbus.

A new rule this season requires teams to start at least three Canadians, which may be all the homegrown talent Montreal coach Mauro Biello has. Forward Anthony Jackson-Hamel is a question mark after a bout of gastro-interitis and forward Ballou Tabla is doubtful with a sore ankle. Louis Beland-Goyette (knee) and David Choiniere (ankle) are out.

As much as they are rivals, some Impact and TFC players are also teammates on the national squad who were together only last week for a win over Curacao at Saputo Stadium.

"There was some banter," said Bernier, who wore the captain's armband against Curacao. "Raheem (Edwards), Jonathan (Osorio). Tosaint (Ricketts) wasn't there but I've known him for a while now.

"They're doing very well so Reheem wasn't afraid to talk about his team. For a young player, he's not shy of talking, which I like because it means he has confidence in himself and that's good for the men's national team. But we're not on the same team now. It's 2017 and whatever we did in 2016 doesn't exist anymore. We have to prove that we're the best team."

— With files from Neil Davidson in Toronto

Note to readers: This is a corrected story. An earlier version misspelled Tosaint Ricketts' name.

NHL unveils return-to-play format in the event 2019-20 season can resume
May 26, 2020 8:30 PM
University of Toronto women's basketball coach retiring after 41 seasons
May 26, 2020 6:18 PM
Comments
We welcome your feedback and encourage you to share your thoughts. We ask that you be respectful of others and their points of view, refrain from personal attacks and stay on topic. To learn about our commenting policies and how we moderate, please read our Community Guidelines.