Former Portugal under-21 midfielder Stephen Eustaquio back in Canada fold

TORONTO — Stephen Eustaquio was seven when he left Canada for Portugal with his family. Fifteen years later, the Cruz Azul defensive midfielder is back — looking to make his debut for Canada. Coach John Herdman and Canada Soccer have been waiting.
0
Oct 9, 2019 11:55 AM By: Canadian Press 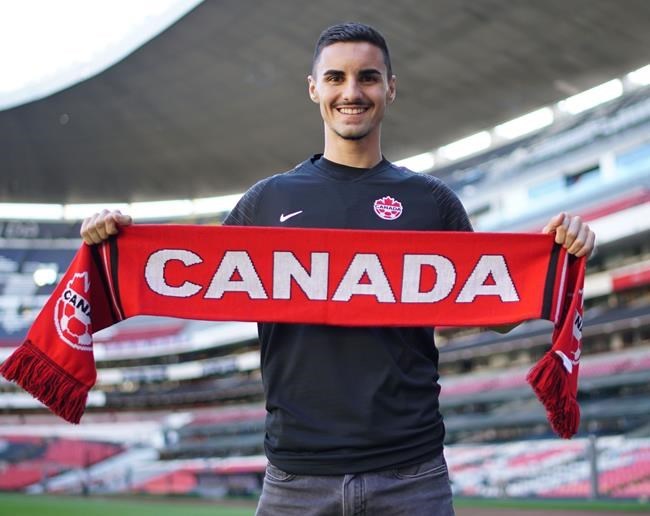 TORONTO — Stephen Eustaquio was seven when he left Canada for Portugal with his family. Fifteen years later, the Cruz Azul defensive midfielder is back — looking to make his debut for Canada.

Coach John Herdman and Canada Soccer have been waiting.

First, they waited while Eustaquio finished out duties with the Portuguese under-21 team. And then they gave him time to recover from a knee injury suffered playing for his Mexican club team in January.

Restored to health, Eustaquio is in camp with the Canadian men ahead of their Oct. 15 CONCACAF Nations League match with the U.S. at BMO Field.

"It feels very good," Eustaquio said in an interview. "I couldn't get here earlier. But with all the circumstances, everything takes time so I'm very happy to be here finally ... I feel honoured."

Eustaquio's parents are from Portugal but came to Canada.

His older brother Mauro, a midfielder who plays for Calvary FC in the CPL, was born in their home town of Nazare — located on the Portuguese coast between Porto and Lisbon. Stephen (pronounced Stefan) was born in Leamington, Ont.

Stephen grew up speaking English. His mother started teaching him Portuguese when they decided the family was moving back home.

But he first kicked a soccer ball in Canada and took his love for the sport with him to Portugal. Eustaquio started with local clubs, first in the youth system of Leiria and then with a local club, GD Nazarenos, at the age of 17.

Six months later he switched to Torreense and spent three years with the third-division club.

"It wasn't a high level but it was a level I needed to grow and stand out," he said.

That led to a move to second-division Leixoes and then, six months later, to top-tier Chaves. He spent a year with Chaves, which was relegated five months after he joined Cruz Azul in January.

The Mexican giant, at the time coached by Portugal's Pedro Caixinha, had noticed him playing for the Portuguese under-21 side.

"One day my agent called me and said, 'Stephen, Chaves is not doing well. You're playing but I have Cruz Azul here. They're one of the top teams in Mexico. The coach wants you.'"

Three days later he was Mexico-bound.

He arrived in early January, motivated to show his skills. But some two weeks later, in his club debut off the bench against Tijuana at Azteca Stadium, his knee gave way after just 15 minutes. He had injured his anterior cruciate ligament.

"I saw Cruz Azul as a big opportunity for me and then that happened," he said. "I had so much to show and to help the club and thank them for the opportunity they gave me. And basically I stopped. I didn't play for them for eight months.

"I feel I owe the club because with everything going on, they never skipped anything with me. They treated me well. Nothing missed. The only thing missing is me playing for them."

Eustaquio, 22, was cleared to resume training seven months and one week later, ahead of schedule. He has since played 90 minutes with the under-20 team and hopes to return to the senior squad after his Canada duty.

His road to the Canadian team has taken some turns.

In 2012, he attended a Canadian under-17 camp in Spain. Eustaquio was a late addition, so he arrived on short notice.

"I think at the time I wasn't ready, to be honest," he said. "One day they say you're selected and the other day you have to fly. You've lost your English. You don't know anybody."

Still, he thought he had done well enough to get another call-up. But there was no more contact.

"Then Portugal came," he said.

He was called up to play for the Portuguese under-21 team in its Euro qualifying.

"I love Portugal. I've been there since I was seven ... it's just me giving to Portugal what Portugal gave to me at that time," he said.

An exchange of paperwork between Portugal and Canada soccer authorities led to another call from Canada. Eustaquio said he was committed to his under-21 duties with Portugal but left the door open.

"I'm here today because he was a fantastic guy. He was very patient ... he respected my decision, he respected the time(frame), he respected everything," Eustaquio said. "I never felt pressure."

When Portugal's Euro qualifying campaign ended in failure, he looked to Canada.

Herdman said he called in the newcomer to assess him first-hand and show him the Canadian team culture.

"Stephen could be a big part of what we do in November. Particularly if he's got more game time under his belt, he could be really pushing for a starting spot,'' Herdman said.

"It's great to have him in and be part of what we've created here,'' he added.

This report by The Canadian Press was first published Oct. 9, 2019.

Powell's big 4th quarter leads Raptors past Hawks, 122-117
Jan 20, 2020 6:44 PM
Comments
We welcome your feedback and encourage you to share your thoughts on this story. We ask that you be respectful of others and their points of view, refrain from personal attacks and stay on topic. To learn about our commenting policies and how we moderate, please read our Community Guidelines.