VICTORIA — Forward Austin Czarnik says the Calgary Flames are starting the pre-season at full throttle, the speed the team needs to keep generating to be successful this year.
0
Sep 17, 2019 1:44 AM By: Canadian Press 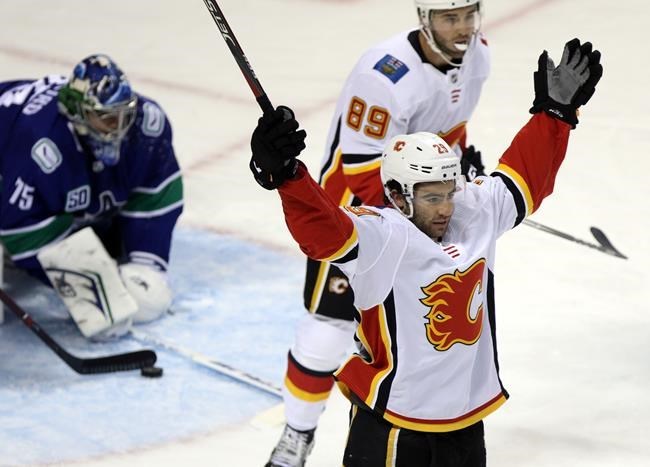 VICTORIA — Forward Austin Czarnik says the Calgary Flames are starting the pre-season at full throttle, the speed the team needs to keep generating to be successful this year.

Czarnik scored two goals to lead Flames to a 4-3 win Monday over the Vancouver Canucks in the first exhibition hockey contest for both teams.

The two teams also met Monday in Calgary, where the Canucks beat the Flames 3-2 on an overtime goal by Jake Virtanen.

The Flames and Canucks iced split squads in Victoria and Calgary as the teams look to settle their rosters for the coming NHL season.

"We're a fast-paced team that likes a transition game where we can go into the zone and make things happen," Czarnik said. "If we can play like that this year, we can be very effective."

The Flames were leading 4-1 late in the third period, but goals by Canucks Josh Teves and Bo Horvat with less than three minutes remaining in regulation time made the game close.

Czarnik, a former Boston Bruin, scored in the first and second periods. His first-period goal was on a goal mouth scramble while the second came from a blast just inside the right face-off circle midway through the second period, beating Canuck goalie Mike DiPietro.

Dillion Dube opened the scoring for the Flames at 5:11 in the first period. Czarnik's first goal was an unassisted power-play marker at 6:30 in the first.

Loui Eriksson opened the scoring for the Canucks in the third period. Teves scored when he circled the Calgary net and beat Flames netminder Tyler Parsons with a shot to the top of the net.

Canucks coach Travis Green said his team played better in the second half of the game after a tentative opening first period.

"I thought we looked better as the game went on," he said.

Green said he told the players during the first intermission to lose their first-game jitters and play hockey the way they are capable.

"I thought we had a couple of our young guys who looked a little nervous," he said. "When you're nervous your feet don't move as quick as they should and your hands don't work as well as they should. Confidence is a funny thing, when you have it good things happen."

The Flames outshot the Canucks 41 to 33.

Canucks centre Elias Pettersson, the NHL rookie of the year, did not dress for either of the games in Victoria or Calgary.

Canuck veterans Horvat and Chris Tanev were in the lineup in Victoria. Newcomers Jordie Benn and J.T. Miller were also dressed in Victoria. Miller appeared to be one of the few Canucks scoring threats during the contest.

Earlier Monday, the Canucks announced the signing of third-year forward Brock Boeser to a three-year extension.

General Manager Jim Benning said in Victoria the Canucks consider Boeser one of the team's core players and are expecting him to prove himself worthy of a long-term contract over the next three seasons.

Note to readers: This is a corrected story. A previous version had the incorrect spelling of Dillon Dube's first name.