VANCOUVER — As he watched his team waste a number of opportunities to build on its lead Sunday, Vancouver Whitecaps head coach Carl Robinson had a sinking feeling.
Oct 15, 2017 11:24 PM By: Canadian Press 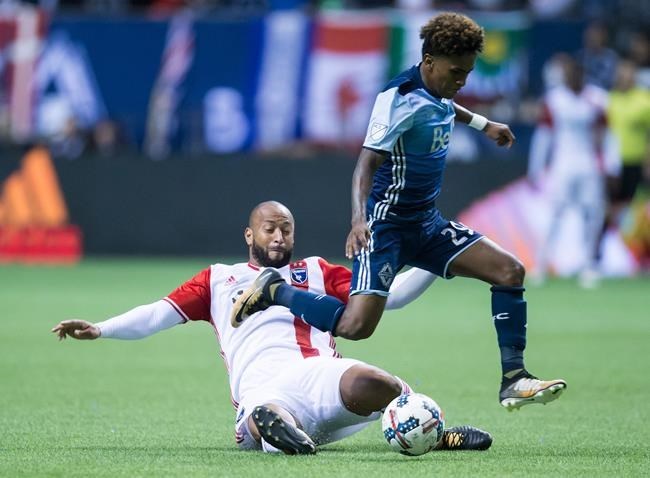 VANCOUVER — As he watched his team waste a number of opportunities to build on its lead Sunday, Vancouver Whitecaps head coach Carl Robinson had a sinking feeling.

"It certainly did today."

Valeri Qazaishvili scored in the 77th minute to cancel out Yordy Reyna's first-half opener as the San Jose Earthquakes salvaged a 1-1 tie with Vancouver to deny the Whitecaps a chance to clinch top spot in Major League Soccer's Western Conference for the first time in club history.

Vancouver (15-11-7) remains in pole position, with both the Seattle Sounders and Portland Timbers two points back heading into the final weekend of the regular season.

The Whitecaps visit the Timbers next Sunday, while the Sounders host the Colorado Rapids. Vancouver needs at least a point in Portland to secure first, but could finish as low as third depending on the result at Providence Park and what happens in Seattle.

The top two teams in the conference get a bye to the semifinals.

"Definitely the feeling in the change room is huge disappointment," said Whitecaps goalkeeper Stefan Marinovic, who made four saves in his home debut. "We had a chance to put the conference to rest."

San Jose (12-14-7) moved into the sixth and final playoff spot in the West after earning the hard-fought draw.

"We let ourselves down, didn't take our chances, conceded a soft goal," Marinovic continued. "It's a shame."

With the Whitecaps seemingly in control in the second half, Qazaishvili took a sneaky pass from Chris Wondolowski to catch Vancouver's defence napping before cooly beating Marinovic for his fifth of the season.

The Georgian midfielder then nearly gave San Jose the lead moments later, forcing a great leaping save out of Marinovic.

"I wish I could have pulled out a worldie for the first goal to help the team," said Marinovic, a New Zealand international. "You have to bounce back from any type adversity or disappointment really quickly."

Reyna had an excellent opportunity to win it in the 86th minute, but Earthquakes 'keeper Andrew Tarbell stood tall.

Brek Shea then sent a header over the crossbar off a corner a few minutes later before another chance went wide in injury time as the Whitecaps pressed for the three points.

"We created a lot of chances, we could have scored more goals," said Vancouver defender Kendall Waston. "Sometimes that happens."

Reyna put the Whitecaps ahead in the 29th minute with his sixth goal when the classy attacking midfielder finished off a great move where Cristian Techera played a ball into the path of a hard-charging Jake Nerwinski.

The Vancouver right back in turn fed a pinpoint pass across the face of goal that Reyna, who missed the first half of the season and spurred the Whitecaps' climb up the standings, cooly steered home from in tight to send the crowd of 22,120 at B.C. Place Stadium into a frenzy.

Coming off a disappointing 3-0 loss at the New York Red Bulls last Saturday, the Whitecaps had Reyna (Peru), Marinovic (New Zealand) and Waston (Costa Rica) all back from international duty.

Vancouver opened Saturday's match somewhat sloppy in possession with a number of needless giveaways, perhaps feeling the nerves of the occasion.

Whitecaps striker Fredy Montero had a header partially blocked by an Earthquakes defender in the 18th minute before Wondolowski forced a fingertip save in the 22nd from Marinovic, who started in place of David Ousted after making three road appearances.

Shea had a chance for Vancouver four minutes later after the ball fell to him in the San Jose penalty area, but Tarbell made an excellent diving stop with his left hand.

Following Reyna's opener, Montero had an opportunity in the 48th minute on a quick counterattack, but Tarbell was there to make a fine stop before again thwarting the Colombian in the 60th to give his team a chance — one that Qazaishvili took.

"We switched off and they equalized in a game we should have put to bed," said Robinson. "We've to got accept it.

"We're disappointed, but we'll take the point and move on."