OTTAWA — The Ottawa Senators made Marcus Hogberg’s first NHL win one to remember. Hogberg made 33 saves to compliment Anthony Duclair’s power-play overtime winner to give the Senators a 5-4 victory over the Nashville Predators Thursday night.
Dec 19, 2019 11:42 PM By: Canadian Press 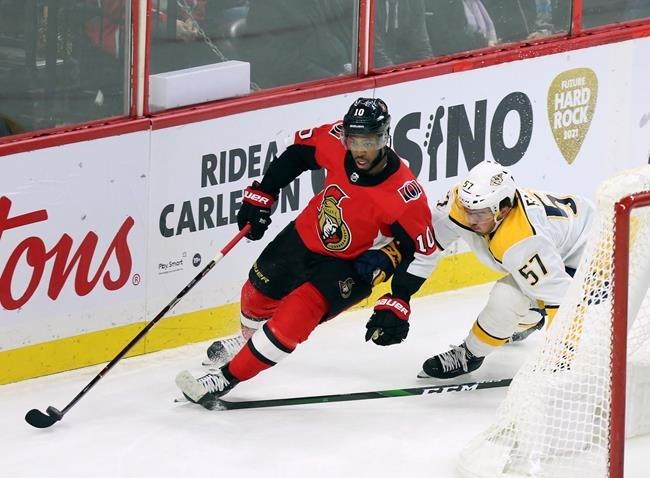 OTTAWA — The Ottawa Senators made Marcus Hogberg’s first NHL win one to remember.

Hogberg made 33 saves to compliment Anthony Duclair’s power-play overtime winner to give the Senators a 5-4 victory over the Nashville Predators Thursday night.

The Senators (15-18-3) jumped out to a 4-1 lead on goals by Colin White, Vladimir Namestnikov, Artem Anisimov and Brady Tkachuk, but allowed the Predators to score three unanswered goals in the third to tie the game.

“With two two-goal leads they were able to come back, but obviously we wanted to win that one for (Hogberg),” said Jean-Gabriel Pageau. “He’s been solid every time he’s come up here. He’s worked hard every time and finally he got his first win.”

Hogberg was slated to be the back-up, but was given the start after Anders Nilsson became ill during the day. Playing his eighth career game, the 25-year-old was thrilled to finally pick up a win after a solid outing against Tampa Tuesday night when the Senators lost 4-3 in overtime.

“I said to myself to just be patient and try to play my game and focus on the next save,” said Hogberg. “This was my first win and I’m just really happy.”

Duclair’s winner was his 20th of the season, tying his career high set in his rookie season, and now has 10 goals and three assists in his past 10 games.

The 24-year-old said he never imagined hitting the 20-goal mark before Christmas.

“I didn’t really have any expectations coming in this year,” said Duclair. “The only thing I wanted stats-wise was 82 games. I had 81 in my rookie year, I missed one because I was sick, but stats-wise that’s what I’m aiming for. If I’m in the lineup it means I’m being consistent and helping the team win.”

The Predators, playing their third of a four-game road trip, are looking to close the gap in the competitive Central Division.

“In the third period I thought we showed some character, but we have to stay on it,” said Ryan Ellis. “We’re in a hole right now that only we can dig ourselves out of. The last two games were steps and the third period was a good third period because we got a point, but at the end of the day we need every point we can get.”

The Senators took a 4-1 lead in the opening minutes of the third on Tkachuk's power-play goal, but Nashville cut the lead in half 18 seconds later as Grimaldi picked up his own rebound and squeezed it past Hogberg.

Nashville scored a power-play goal midway through the third to make it a one-goal game, with Johansen tipping home a pass from Ellis. Josi then tied the game with an individual effort with seven minutes remaining.

“Roman’s been our most consistent guy night in and night out,” said Predators coach Peter Laviolette. “He brings it every single night. He gives you everything he has and he sets the example. He’s been good for us.”

The Predators scored the game's first goal on a Smith backhand midway through the first period. Smith has three goals in his last two games after not scoring in 16 previous matches.

Ottawa tied it 1-1 early in the second as White beat Saros with his first goal in 19 games.

The Senators took a two-goal lead less than a minute later as Namestnikov knocked down a Pageau shot in the slot and backhanded it in. Tyler Ennis found Anisimov in front and he wristed it past Saros with just over two minutes remaining in the period.

Notes: Mark Borowiecki set a new career high for points (12) with an assist on White's goal. Kyle Turris picked up his 400th career point with a helper on Nashville's first goal.

This report by The Canadian Press was first published Dec. 19, 2019.

Note to readers: This is a corrected story. A previous version listed Hogberg as an emergency call-up.