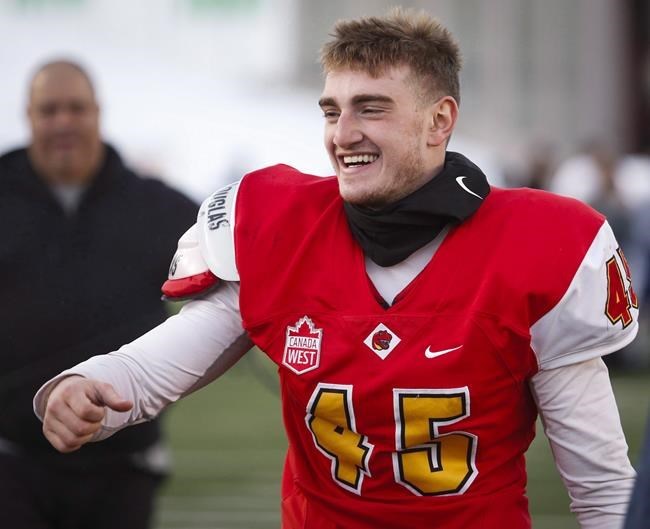 But after booting a game-winning — and Canadian university record-setting — 59-yard field goal on the final play of last Saturday's Hardy Bowl, he's been flooded with media requests.

DiFonte's kick, which gave Calgary a 44-43 win over the UBC Thunderbirds, went viral. Video of the winning play was shown on NFL.com and ESPN while retired punter Pat McAfee, who has 1.17 million Twitter followers, gave DiFonte a shout out on the social media site.

The Winnipeg native and his Calgary Dinos take on the No. 1-ranked Laval Rouge et Or Saturday in the Mitchell Bowl with a spot in the Vanier Cup on the line.

DiFonte is sure the Rouge et Or won't be focused on last week's results when the game starts.

"They don't care and we need to have the same mentality. We need to give it our all, regardless of what happened last week," he said.

The Mitchell Bowl, with the winner moving on to play the champion of Saturday's Uteck Bowl between Western and Acadia in the Canadian university football championship game, serves as a rematch.

Calgary worked over Laval in the early stages of last year's Vanier Cup before losing 31-26.

The Rouge et Or's win was the school's ninth national football crown and eighth since 2003.

Even with a 9-1 record, Laval's players and coaches talked about needing to overcome a substandard season.

"At the beginning, it wasn't as explosive or as consistent," said Richard. "We had trouble keeping up a good pace throughout a whole game. We had trouble being able to produce on both sides of the ball. That was our problem. Ups and downs … that was our main defect. I think we've worked through that."

The Dinos have dropped all five meetings with the Rouge et Or, including three times in the Vanier Cup.

"I'm happy that we can play them again," DiFonte said. "Top dog will win, right? Hopefully we'll get our revenge."

"They know how to run a program," said Sinagra. "(But) there's too much of an aura around them that they're like these big monsters. Really, you've got to go out there and punch them in the mouth. You can't hold back.

"We know we pose a huge threat to them."

Matthews has OT winner as Leafs rally from 3-goal deficit to beat Blue Jackets
Aug 8, 2020 2:06 AM
Comments
We welcome your feedback and encourage you to share your thoughts. We ask that you be respectful of others and their points of view, refrain from personal attacks and stay on topic. To learn about our commenting policies and how we moderate, please read our Community Guidelines.