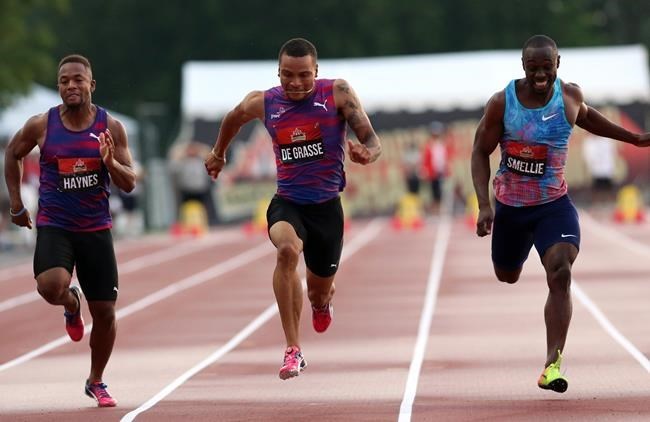 OTTAWA — Canadian sprint star Andre De Grasse was banking on a fast time in his final 100-metre race before next month's world championships.

The triple medallist from last summer's Rio Olympics won his third consecutive 100 title at the Canadian track and field championships on Friday, crossing in 10.11 seconds.

But in the moments after the victory, De Grasse admitted disappointment in his time — both for the Ottawa fans that squeezed into the grandstand at Terry Fox Stadium, and because it was his final 100 before his showdown with Jamaican superstar Usain Bolt next month in London.

"This is the last one, so that's why I wanted to try to put down a time," De Grasse said. "I couldn't tell you exactly what happened. Ran the semis, felt pretty good, shut it down. And the finals. . . I don't know what happened, I thought I was ready to run a fast time and a little disappointed I couldn't give the crowd what they wanted."

Brendon Rodney of Toronto was second in 10.18, while Gavin Smellie of Brampton, Ont., crossed third in 10.23.

De Grasse, a 22-year-old from Markham, Ont., had cruised to an easy win in his semifinal earlier in the night, coasting across the line in 10.13 on a track still slick from a thunderstorm that rolled through the city.

He had the crowd roaring before he even stepped into the blocks for the final. They cheered loudly when he ran down the straightaway in his warmup. The grinning De Grasse waved his arms to encourage the cheering.

"It was good, I needed that energy, I was definitely going to try to (have it) carry me to run a fast time, so I love when they do that," De Grasse said of the crowd. "Again, I'm a little bit disappointed I couldn't give them what they wanted."

Aaron Brown of Toronto, who boasts a personal best of 9.94, was disqualified for a false start in his semifinal, but ran under protest with hopes of launching an appeal.

Crystal Emmanuel of Toronto won the women's 100 in 11.20, dipping under the world championship qualifying standard. Emmanuel hollered "Yes!" several times after crossing the finish line to the amusement of the crowd.

"Excited and happy," said Emmanuel, the defending champion in both the 100 and 200. "Coming out here, we just went with the flow of things, the rain, having clear skies afterwards. I came out here and my plan went awesome. Execution and just how I felt was really amazing."

A thunderstorm rolled in just prior to the start of the evening session, delaying several field events. But optimistic fans still squeezed into the grandstand under a virtual tarp of dozens of umbrellas, staking out their spots as they waited for the storm to pass.

The skies had cleared by the sprint finals, but sprinters like it hot, and the temperature had dipped a couple of degrees.

De Grasse also traditionally listens to music while he warms up, but had left his headphones back at the hotel. Because he has an iPhone 7, he couldn't find someone with the proper adapter needed for headphones, and had to settle for the stadium background noise.

"I had to depend on the crowd to be my music," he said. "It was a little bit annoying, it's the first time I've done that before. It's okay, as long as I don't do that for any major championships."

De Grasse's career best is the 9.91 he ran to win bronze at last summer's Rio Olympics. He ran his fastest time this season — 10.01 — to win the Diamond League meet in Oslo, Norway last month. He followed that up with a blistering, but wind-aided, 9.69 to win the Stockholm Diamond League last month.

"I've got to go back and talk to my coach (Stuart McMillan), see what happened in that race," he said about Friday's final. "I feel like I'm ready coming off of Stockholm, I was feeling pretty good.

"I ran pretty fast in the semifinals and I didn't even think I pushed it that hard, I don't know if I just ran out of gas, or what exactly happened."

The Canadian record of 9.84 is co-held by Donovan Bailey and Bruny Surin.

De Grasse will also run the 200 at the national championships, which determine the team for next month's world track and field championships in London, where the young Canadian will have one last shot at Bolt — the Jamaican is retiring after the worlds.

World silver medallist Melissa Bishop of Eganville, Ont., ran a relaxed 2:03.80 to win her 800 semifinal and advance to Saturday's final.

Ace Canadian esports driver Brooks tearing up the track online during COVID-19
May 24, 2020 1:03 PM
Canada's NHL teams offer varying refund options to season-ticket holders
May 23, 2020 4:41 PM
Comments
We welcome your feedback and encourage you to share your thoughts. We ask that you be respectful of others and their points of view, refrain from personal attacks and stay on topic. To learn about our commenting policies and how we moderate, please read our Community Guidelines.