Hamilton's starting quarterback Zach Collaros is eager to start the regular season healthy. Collaros got the start on Friday as his Tiger-Cats fell 23-16 in pre-season action against the Toronto Argonauts at Tim Hortons Field.
Jun 17, 2017 12:13 AM By: Canadian Press 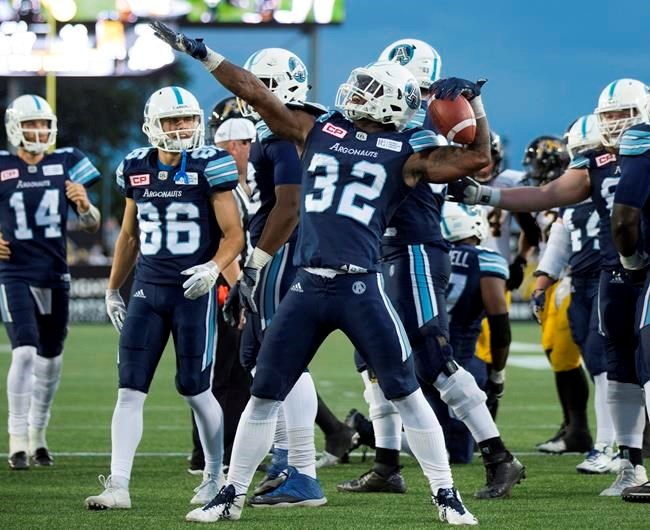 Collaros got the start on Friday as his Tiger-Cats fell 23-16 in pre-season action against the Toronto Argonauts at Tim Hortons Field. This time last year Collaros was still out of the lineup recovering from a knee injury suffered in 2015. He didn't return until Week 8.

"I'm just getting ready to play," he said.

"I'm preparing for the season six months leading up to it as I did last year. I just had to start a little bit later (last year) because of the injury. I'm just excited for the season."

Collaros left early in the second quarter Friday right after throwing the game's first touchdown, a six-yarder to Brian Tyms. He finished with 10 completions on 17 attempts for 126 yards and one TD.

Toronto overcame a 16-0 second-quarter deficit to take the lead late in the game and finish the pre-season 2-0.

Collaros didn't play in the first pre-season game, a 30-29 loss to Ottawa, and he agreed that he felt a bit rusty.

"It was our first time all out there together," he said. "Some live action against somebody other than our defence ... Getting hit really gets you back into game mode and I took a good shot there in the first quarter and kind of woke up I guess."

"It was great to see Jeff play well. I thought he moved the football team," said Toronto's new head coach Marc Trestman. "McLeod played well, he hung in there. It was tough early on playing against the guys he was playing against. He stood in there and made a play when we needed a play and got us back in the game.

"You saw what Dakota did. He had a chance to make some plays and have an impact on the game so I was excited for all of them."

Prukop hit Jamel Johnson for a 28-yard touchdown late in the fourth as the Argonauts completed its rally.

Prukop, fighting for a spot on the practice roster, led the 97-yard game-winning scoring drive which gave the Argos the first lead of the game with 3:02 left.

Pfeffer's punt single made it 16-15 just 19 seconds into the fourth and Prukop came in at quarterback for the Argos. Pfeffer's missed 48-yarder tied the game at 16 with 9:39 left to play.

Hamilton had raced out to a 16-0 lead in the first half before Toronto slowly clawed its way back.

"I think we did some good things, but we need to finalize our team and we need to start to properly game plan and get our guys ready to play," said Hamilton head coach Kent Austin, who's team went 0-2 in the pre-season.

Hamilton back up, Masoli, took over in the second and took advantage of Toronto receiver Joe Morgan's fumble on his own 40, immediately leading a scoring drive that ended with Scheuerman's two-yard plunge to give the Ticats a 16-0 lead.

A conceded safety by Toronto's Hajrullahu midway through the first quarter was set up by Ticat Adrian Tracy's sack of Bethel-Thompson at the Toronto two-yard line and put Hamilton on the board first.

Bethel-Thompson started at pivot for Toronto. The 28-year-old out of Sacramento State is also battling for a spot on the practice roster. He finished the first quarter with zero completions on five attempts and the Argo offence only generated nine yards.

He made his first pass completion on his first play of the second, and the ball was promptly fumbled by Morgan, setting up a Ticat score. But late in the second he engineered a 39-yard scoring drive that ended with a one-yard TD run by Wilder to get to the half down 16-7. He finished with five completions on 13 attempts for 78 yards.

Mathews started the third for Toronto. Late in the quarter he led a 75-yard scoring drive, ending with a 22-yard TD pass to Ralph. The two-point convert attempt failed but the Argos pulled to 16-14. That would be it for Mathews, who went 12 for 15, 136 yards and one TD.

Masoli finished the night completing five-of-six pass attempts for 48 yards and one interception, plus a 16-yard rush. He was replaced by Keith with under three minutes left in the third. Keith was pulled late in the fourth having completed one-of-four pass attempts for 11 yards and was replaced by Kilgore, who finished completing two-of-six for 68 yards.