REGINA — Fresh legs and a fresh perspective from the Saskatchewan Roughriders prolonged a stale taste in the mouths of the B.C. Lions.
0
Jul 21, 2019 12:18 AM By: Canadian Press 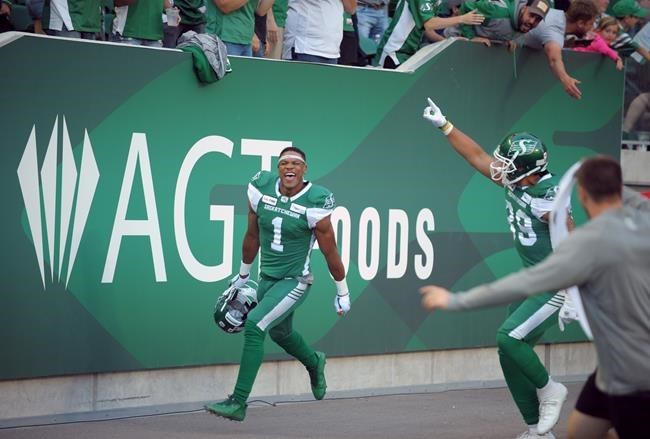 REGINA — Fresh legs and a fresh perspective from the Saskatchewan Roughriders prolonged a stale taste in the mouths of the B.C. Lions.

Marcus Thigpen's 100-yard kickoff return for a touchdown just before halftime provided a spark the Riders needed in their 38-25 victory over a reeling Lions squad.

B.C. had just taken a 16-10 lead thanks to a one-yard touchdown plunge from Mike Reilly. Thigpen took the ensuing kickoff to the end zone and the Riders assumed a 17-16 edge at the half. They outscored B.C. 21-9 in the second half, including a 20-0 run that put the game out of reach.

“I kind of set up the outside and made a cut up the middle and made a couple guys miss and just saw open field in front of me. Then my speed just kicked in,” Thigpen said of his game-changing return.

“That’s what I’ve been doing my whole career — trying to give my team a spark. We had that going into the half and came out in the second half and just kept going.”

The victory improves the Riders’ record to 2-3. The Lions fell to 1-5, the first time they have started a season with five losses in six game since 2011.

“I think everybody knows where (our frustration level) is at. If people can't figure that out when you’re 1-5 then…” Reilly said.

The Riders got a solid bounce-back effort from quarterback Cody Fajardo, especially in the second half. He threw for one touchdown — a 50-yard strike to Shaq Evans — and ran for another. His three-yard touchdown run late in the third quarter pushed the Riders ahead 25-19, a lead they wouldn't relinquish.

William Powell added an insurance score with a three-yard touchdown run in the fourth quarter before Evans chipped in with his touchdown grab.

Fajardo finished the night completing 17-of- 23 pass attempts for 278 yards and two touchdowns. Evans was his favourite target with five catches for 158 yards. Fajardo also rushed for a team-high 53 yards.

Reilly didn't hang this loss on the defence. Sergio Castillo’s four field goals on Saturday helped, but Reilly would have preferred to end those drives with different results.

“We have to be better in the red zone,” he said. “If we came away with touchdowns then I'm not saying it’s a different outcome, but it’s certainly a closer score and you never know what happens.

“The second half we folded like cheap tents in all three phases. The defence was playing great in the first half and then (Saskatchewan) was able to march down and put some touchdown drives together. Offensively, we moved the ball well the entire game. We just didn't finish in the red zone. That was obviously the difference. Way too many field goals.”

Reilly completed 31-of-40 attempts for 346 yards and one touchdown. Bryan Burnham caught eight passes for 106 yards.

Reilly was sacked four times by the Riders, including three from Charleston Hughes. Reilly has been sacked a CFL-high 21 times this season.

Entering the game, B.C. posted a CFL-worst 307 yards per game and ranked eighth in the league averaging 17.6 points per game.

“We have to keep them frustrated. Right now, they’re searching for answers and it’s a critical time in our season too. We’d like to get to .500 and we’d like to win the season series with these guys.”

Hughes had 10 tackles to go along with his three sacks.

The same two teams will conclude the home-and-home series next Saturday in Vancouver.

Music stars pay tribute to Kobe Bryant at Grammys award show
Jan 27, 2020 1:34 AM
Saturday's Games
Jan 26, 2020 11:58 PM
Mary-Anne Arsenault beats curling legend Colleen Jones in Nova Scotia final
Jan 26, 2020 10:03 PM
Comments
We welcome your feedback and encourage you to share your thoughts on this story. We ask that you be respectful of others and their points of view, refrain from personal attacks and stay on topic. To learn about our commenting policies and how we moderate, please read our Community Guidelines.