CHL coaches ponder what could have been after cancellation: 'Everybody lost' 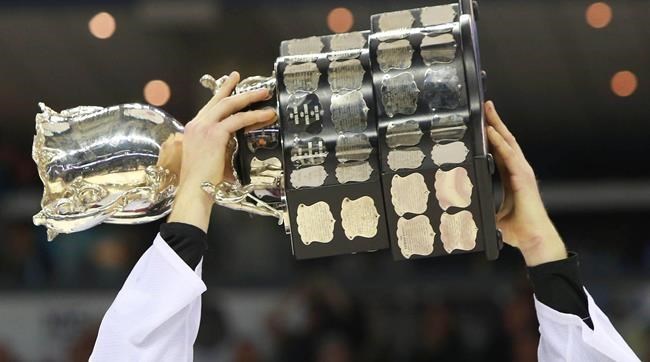 Jim Hulton's lasting image of the 2019-20 season is a bus ride to nowhere.

The head coach and general manager of the Charlottetown Islanders was travelling with his team for a pair of Quebec Major Junior Hockey League games against the Cape Breton Eagles earlier this month when word came down.

Following the lead of other sports across North America, the Canadian Hockey League was suspending play in response to the widening COVID-19 pandemic.

The rest of the regular schedule was cancelled shortly thereafter, but hope remained for the post-season and the annual Memorial Cup tournament.

That hope, however, was snuffed out last week when the CHL — an umbrella organization for Canada's three top-tier junior circuits — pulled the plug amid the novel coronavirus outbreak.

"We were literally on a bus and were told to turn around," Hulton said. "We were four hours into a six-hour trip and turned around. That's the lasting memory of our group being together.

"Not the way you want to remember a season."

Before the announcement, there were signs that junior hockey wouldn't be able to delay its decision much longer. The Memorial Cup, awarded every year since 1919 and pencilled in for late May in Kelowna, B.C., was already fast-approaching.

Coaches and players were hoping for more time, but as the virus that's already killed thousands of people around the world continued to spread, the announcement seemed inevitable.

"It's difficult to process," Hulton said. "Normally in a season you'd have a chance to prepare. You're either missing the playoffs or if you're in the playoffs in the heat of a battle, and you know there's going to be one winner and one loser.

"But here, everybody lost in the blink of an eye."

Ottawa 67's head coach Andre Tourigny, whose team was ranked No. 2 in the CHL, was looking to make another run after opening last spring's playoffs with an Ontario Hockey League-record 14 consecutive wins before dropping four straight to the Guelph Storm in the final.

"I have no doubt it's the right decision," he said. "As a hockey team you win, you lose. Some years you have better chance, but that's sports.

"It's more on the human side seeing guys who have played their last junior game, that is extremely tough."

Many teams across the country sent players home immediately after the season was postponed amid fears of spreading the virus and the closing of international borders.

There were no in-person goodbyes, team dinners, handshakes or hugs.

And there's a chance, with the way life works, some players and coaches who spent countless hours together might never again cross paths.

"(67's defencemen) Noel Hofenmeyer and Nikita Okhotyuk lived together all season — they might never see each other again," Tourigny said. "I might not ever see (top NHL draft prospect) Marco Rossi again.

"It's difficult to think about."

On the hockey side, the Vancouver Giants made a number of moves before the Western Hockey League trade deadline. Now, like most teams, they're left to ponder unanswerable questions.

"We didn't want to have any regrets," said head coach Michael Dyck, who led Vancouver to the 2019 WHL final. "You put everything on the table and let the chips fall where they may, but this year will be a year of what could have been.

Portland Winterhawks head coach and GM Mike Johnston, whose sixth-ranked team wound up finishing first in the WHL this season, was able to keep his roster together for a couple of days after the initial postponement before sending players on the way.

"Wish them good luck and hopefully we're going to see them in another two months," he said of the message from that final meeting. "All of us believed when we left the dressing room that we would see each other (soon)."

Johnston added he was impressed by the maturity of his veterans in the wake of the crushing news that the season was over.

"They sent out notes to the other players and told them, 'Don't take anything for granted in your junior career. It goes by very fast and you never know when your last game's going to be played,'" Johnston said. "We always tell kids to take advantage of every day, every practice, every game.

"Those messages really hit home right now for players that are leaving."

Tourigny, meanwhile, was eager for Ottawa's chance at redemption after that gut-wrenching loss in last spring's OHL final.

"It's rare to have a chance to finish first overall after you lost in the final the year before," he said. "You have another chance with the same group of players. And we had that chance.

"We'll always have that in the back of our minds."

The Islanders were by no means favourites — Charlottetown sat seventh out of 15 playoff teams when the season was halted — but they'll never know where Welsh might have led them.

"You wanted him to be able to ride off into the sunset in a victorious way," Hulton said. "We had our hopes set on him in terms of a Cinderella playoff run.

"You envision him capping off his career in a grander fashion than getting the bus turned around on side of the highway."

This report by The Canadian Press was first published March 30, 2020.