ORLANDO — Bev Priestman leaves her first tournament in charge of Canada with a better idea of the young talent at her disposal but also some pressing questions still to be answered.
Feb 24, 2021 9:49 PM By: Canadian Press 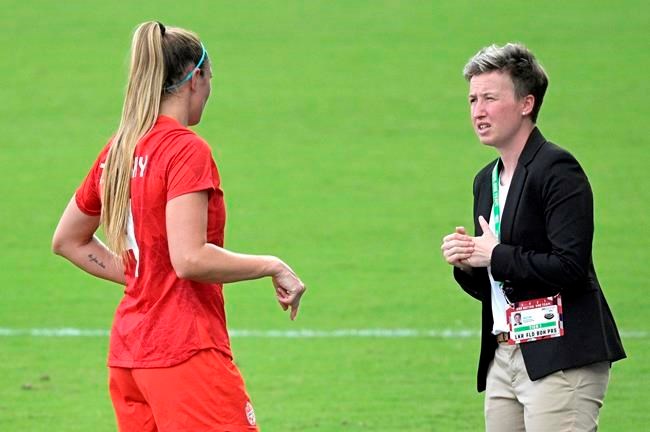 ORLANDO — Bev Priestman leaves her first tournament in charge of Canada with a better idea of the young talent at her disposal but also some pressing questions still to be answered.

The Canadian women exited the SheBelieves Cup on a losing note Wednesday, blanked 2-0 by Brazil to finish the four-country competition at 1-2-0. Canada was punished twice for defensive errors in the first half at Exploria Stadium before regrouping in the second to take the game to Brazil, albeit without any reward.

Missing key players and bedevilled by injury during the Florida tournament, Canada managed just one goal in three matches — its first outings since last March. It has been outscored 9-3 in its last seven outings (1-4-2) dating back to February 2020.

Perhaps more worrying is Canada, tied for eighth with Brazil in the FIFA world rankings, is 0-8-2 in its last 10 matches against teams currently ranked in the top 10. It has been outscored 20-3 over that stretch.

Debinha and Julia scored for Brazil, which punished Canadian mistakes in the first half. After an uneven start, the Brazilians took control and showed their attacking flair against a Canadian backline that was pretty green other than centre back Shelina Zadorsky.

"We can't start games against a Brazil side like that," Priestman said. "I think the second half was more of a representation of what I'd expect to see from the group."

Canada showed more purpose in the early going, stroking the ball around and stretching the Brazilians. But Brazil went ahead in the 14th minute after a giveaway by Rose.

Adriana outmuscled Jessie Fleming for the ball and, after a nice interplay with Debinha, charged into the Canadian penalty box and slid a diagonal shot through goalkeeper Stephanie Labbe's legs from close range. The ball hit the far post and bounced back towards the shooter, with Debinha poking it into goal before Labbe and Zadorsky could corral it.

The goal spurred Brazil on and Canada paid for some more sloppy defence late in the half. Julia hammered home a shot in the 39th minute after a penalty box scramble that saw Rose, Riviere and Carle all unable to clear the ball.

Brazil played deeper as the second half wore on, allowing the Canadians more room on attack in the final minutes. They could not convert, although Zadorsky came close in the 84th minute, kicking out a leg twice while on the ground to force consecutive goal-line stops from goalkeeper Barbara and defender Bruna off a Janine Beckie set piece.

Brazil improved its record against Canada to 9-8-7.

The Canadians kept the U.S. scoreless until the 79th minute in their tournament opener, with the 34-year-old Priestman heartened by the gritty performance.

"That gave me massive massive belief in what this group can do. And I still have that belief," she said.

More clinical finishing is needed, however.

"I've learned and I've seen that Canada has to score more goals. I do believe we will because again the chances and the stats tell us we're in those areas," said Priestman. "It's just that final quality."

"I think the positive is that we're creating those chances. But if I'm honest we've been saying that for a while and we've not shifted to putting those chances in the goal. I don't know what the answer is right now. I think time together is helpful, which is difficult right now."

Defenders Kadeisha Buchanan and Ashley Lawrence and forward Jordyn Huitema were not released by their French clubs because of pandemic-related quarantine issues. Defender Vanessa Gilles returned to her French club after the loss to the U.S. as part of a pre-tournament agreement.

Allysha Chapman and Quinn, who goes by one name, were unavailable Wednesday due to injury.

"There's a massive amount of players missing that could be in the starting lineup," said Priestman. "I think I worked it out today it could be seven players. So what you've seen is some new players and partnership out on the pitch.

"And of those new players that were in there, there were some massive performances."

The Canadian women's next game is an April 13 away friendly against No. 6 England.

"I do believe that come April when we have the whole squad together, we can push forward and address some of the challenges that we've seen at this tournament,' said Priestman.

Priestman made four changes to her starting lineup, with Desiree Scott, Deanne Rose, Sarah Stratigakis and Riviere coming in against Brazil. Scott captained the team, earning her 158th ca.

The only four Canadians to start all three games at the tournament were Zadorsky, Fleming, Beckie and Nichelle Prince.

This report by The Canadian Press was first published Feb. 24, 2021