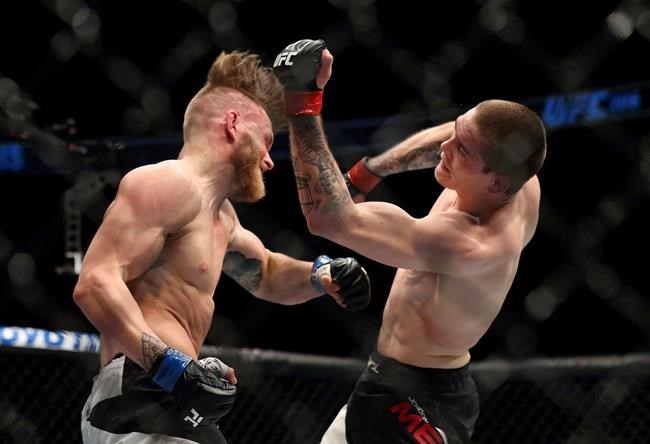 A new father and refreshed fighter after a break from the sport, Mein (29-11-0) continues his comeback in Las Vegas at UFC 213 on Saturday when he takes on American Belal (Remember the Name) Muhammad (11-2-0).

Mein, a native of Lethbridge, Alta., is happily training and "living the dad life." Daughter Olivia is some seven months old and regularly accompanies him to the gym.

"I'm back to the healthy lifestyle," he said. "That plays a big factor in where your mind's at, how you're physically feeling and all of the above."

Bantamweight champion Amanda (The Lioness) Nunes of Brazil takes on No. 1 contender Valentina (Bullet) Shevchenko, a native of Kyrgyzstan who fights out of Peru, in the main event of Saturday's pay-per-view show at the T-Mobile Arena. Nunes won a decision over Shevchenko when they first met in a non-title fight at UFC 196 in March 2016.

Yoel (Soldier of God) Romero meets Robert (The Reaper) Whittaker in the co-main event for the interim middleweight championship. Romero, an American-based Cuban, is ranked No. 1 among 185-pound contenders while Whittaker, a New Zealander who fights out of Sydney, Australia, is No. 3.

UFC president Dana White says the Romero-Whitaker winner will face reigning champion Michael Bisping for the undisputed title. Bisping, currently injured, had been on target to face Canadian Georges St-Pierre in his comeback fight but White said GSP wanted too much time to prepare.

Family is playing a big part in helping Mein find balance these days.

Mein (pronounced mee-INN) trains with brother-in-law Justin Tavernini at the O2 Training Centre in Lethbridge. His sister Brittany, co-owner of the gym with her husband and a certified nutrition coach, is helping Mein with his diet.

"That just bleeds over into the rest of your life — a healthy mind, a healthy body ... I'm feeling great and I have a loving family when I come home," Mein said.

Muhammad is 2-2-0 in the UFC, winning by decision over Randy (Rudeboy) Brown most recently at UFC 208 in February. Mein rates Muhammad as a tough customer, a "grinder" who comes forward with a high-volume attack.

Both men made weight Friday.

Mein, who turned professional at 16, was just 25 when he announced his retirement in August 2015 saying it was time for a change. He came out of retirement a year later, losing his comeback fight in December via decision to Norwegian newcomer Emil (Valhalla) Meek.

While Mein was more accurate, Meek was busier with his striking.

Mein had a 22-18 edge in significant strikes in the first round but Meek outlanded him 19-6 and 13-6 in the next two rounds, according to FightMetric.

Immediately after the fight, Mein admitted to feeling "a little sluggish." But he feels better about it with the passage of time.

That more relaxed review is indicative of Mein's new take on his profession. He acknowledges that his previous pedal-to-the-metal approach to training had taken a toll.

Mein retired in the wake of a January 2015 loss to Thiago (Pitbull) Alves, a fight that saw him batter the American-based Brazilian veteran in the first round before being laid low by a body kick in the second. Prior to that, he won a performance-of-the-night bonus in a 72-second stoppage of Mike (Quicksand) Pyle.

On his game, Mein is a smart fighter with a deep tool box.

Mein made his pro debut in June 2006 when he lost by submission to Rory MacDonald, a former UFC contender now campaigning in Bellator. It was MacDonald's third fight.