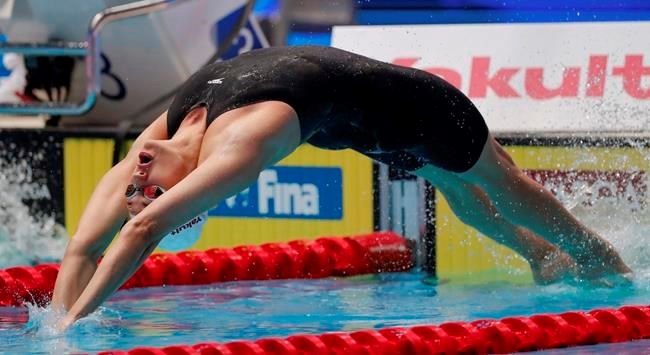 The 23-year-old from LaSalle, Ont., is now part of an exclusive Canadian club with two golden moments.

Masse became just the second Canadian swimmer to win two world championship gold medals when she defended her title in the women's 100 metre backstroke on Tuesday. The late Victor Davis of Guelph, Ont., also won twice at the worlds.

"I think it's comparable," said Masse, who also captured gold at the most recent world championships with a then-world record time of 58.10 seconds in Hungary in 2017. "To be a gold medallist is a dream come true. They both have their own feelings to them and they both feel great."

The University of Toronto student was fourth at the turn, but charged home to win in 58.60 seconds, 0.25 seconds ahead of Minna Atherton of Australia. Olivia Smoliga of the United States took bronze.

Masse was well aware there was a different challenge as defending champ.

"It's definitely something I've been working on," said Masse, who won bronze in the same event at the 2016 Rio Olympics and also took gold in the 100 backstroke at the 2018 Commonwealth Games and Pan Pacific Championships.

"I've been focusing on myself and not letting the pressure or expectations get to me."

"When you come into any major championships and Games as defending champion, there's a whole different level of expectation on the athlete that wasn't there beforehand,” Atkinson said. "I think that Kylie handled herself tremendously. To come back, get a gold medal, get her hand on the wall first, her experience came through over that second 50, and she is a true champion."

It marked Canada's second gold in as many days. Maggie MacNeil won the women's 100 metre butterfly, while Sydney Pickrem copped bronze in the women's 200 metre individual medley with Masse in the facility on Monday.

"It was pretty incredible," Masse said. "They definitely gave me motivation and inspiration to swim fast."

After the world championships wrap up on the weekend, Masse will go home for a few weeks of rest before resuming training at school. The 2020 Tokyo Olympics, of course, are just a year away.

"I want to continue to improve," Masse said. "I would love to be better with my time and that’s my goal. But right now I'm over the moon to win here again."

Meanwhile, quadruple Olympic medallist Penny Oleksiak of Toronto advanced to the women's 200 metre freestyle final on Wednesday by finishing seventh in the semis in a personal best 1:56.41.

"I felt really good going out but I let it get a little bit away from me," said Oleksiak, who led the first 150 metres of her semifinal. "I've been trying to work on the front half of all of my races. I just need to get more confident with that."

Mack Darragh of Oakville, Ont., finished 14th in the men's 200 metre semis and did not advance.

Also Tuesday, Sun Yang was in the middle of controversy again. Only this time, it wasn't his doing.

The Chinese star still got shunned on the medals podium again.

Sun won the 200-metre freestyle on Tuesday night after Danas Rapsys of Lithuania finished first and got disqualified for an apparent false start.

Sun touched second, but got elevated after Rapsys had already celebrated in the pool.

Sun appeared surprised, clasping his hands to his face, but quickly sat on the lane rope and raised both arms in the air as a mix of cheers and boos rang out.

On the podium, Scott wanted no part of sharing the moment with Sun.

Scott kept his hands clasped behind his back and refused to shake Sun's hand, standing off on his own while the other joined Sun to pose for photographers.

Sun, who served a three-month doping ban in 2014, is being allowed by FINA to compete in Gwangju ahead of a Court for Arbitration in Sport hearing in September that threatens Sun's career.

After Sun won the 400 free, silver Mack Horton of Australia refused to step on the podium or acknowledge Sun during the medals ceremony. FINA, swimming's governing body, sent warning letters to Swimming Australia and Horton for his actions.

"FINA has currently done more to reprimand Mack Horton than they have done to reprimand Sun Yang," said American Lilly King, who won the women's 100 breaststroke.

Sun has been accused of smashing vials of his blood with a hammer during a clash last year with testers, and faces a lifetime ban if found guilty.

"He does quite a good job of making sure everyone continues to know about it," Scott said, referring to Sun's pending doping case. "So I guess that's all I've got to say about that."

Sun spread his arms apart and looked at Scott as the Brit turned to come off the podium. Sun and the other two stopped for photographers on the pool deck, but Scott kept on walking.

"The athletes are starting to stand up for themselves and stand up for what they believe in so, I commend them," King said. "That's incredibly brave."

There were more boos — and cheers from Chinese fans — in the crowd.

"The most important thing as a sports person is you have a right to a voice," Peaty said. "Duncan shared his voice and so did the crowd, so it's completely fair."

— with files from The Associated Press

Leylah Annie Fernandez advances, while Denis Shapovalov eliminated at French Open
Oct 1, 2020 2:28 PM
WHL's Moose Jaw Warriors announce formal review of primary team logo
Oct 1, 2020 1:50 PM
Comments
We welcome your feedback and encourage you to share your thoughts. We ask that you be respectful of others and their points of view, refrain from personal attacks and stay on topic. To learn about our commenting policies and how we moderate, please read our Community Guidelines.