MONTREAL — Marlon B. Wright was remembered Friday as a promising welterweight fighter who went on to become one of Canada's top boxing referees, officiating title bouts around the world.
0
Jul 7, 2017 5:58 PM By: Canadian Press 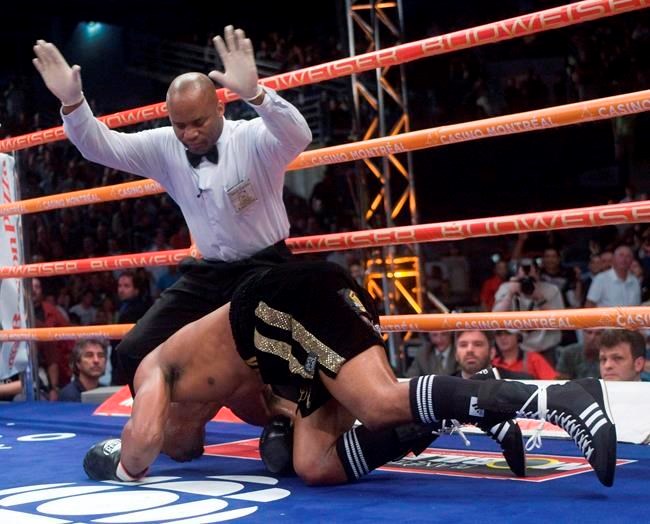 MONTREAL — Marlon B. Wright was remembered Friday as a promising welterweight fighter who went on to become one of Canada's top boxing referees, officiating title bouts around the world.

The Jamaica native who grew up in Montreal had been suffering from melanoma, a form of skin cancer, since 2014 but was still working as recently as Feb. 24 when he handled a bout in Quebec City between former super-middleweight champion Lucian Bute and Eleider Alvarez.

Wright's resume in two decades as third man in the ring includes Kell Brook's loss to Gennady Golovkin in a middleweight title unification bout in London in September and David Lemieux of Montreal's middleweight title win over Hassan N'Dam in 2015.

He worked title fights in Europe, Asia and North America but was also a regular on fight cards large and small around Quebec.

Despite the accolades, Wright is perhaps best known in the boxing world for his controversial call in 2008, when Bute retained his International Boxing Federation title despite being knocked senseless late in the final round by Librado Andrade.

Wright stopped midway through his count to wave Andrade back to a neutral corner. What some criticized as a long count gave Bute time to get up just before the final bell and get the victory by decision in a fight he had dominated through the first 10 rounds. Wright's actions, televised live in the U.S., were scorched by many fans and media members, including some who nicknamed him Marlon B. Wrong.

"The Andrade fight really gave him a scar on his career that might have hurt his advancement, but to me, he was one of the best referees I've ever seen," said trainer, cutman and broadcaster Russ Anber. "I always thought he should be up there with the best refs in the game."

Anber helped train a 12-year-old Wright at the Olympic Boxing Club in Montreal in the early 1980s.

He described the young pugilist as "a hell of a fighter. He had that something — that flow, that co-ordination, that jive."

Wright turned pro in 1983 but fought only 11 times, going 10-1, all in Quebec. He won his last bout in 1992 over Alain Boismenu. Anber said he could have gone far, but boxing was in a lull in his era and he didn't have a manager willing to take him on the road, as Anber did with two other Jamaican Montrealers, Otis and Howard Grant.

Otis Grant, who won the World Boxing Organization middleweight title in the 1990s, recalled that one of his first amateur fights was against Wright.

"He is one of only three guys in the world who have victories over me and my brother," said Grant, who later became Wright's teammate on the Quebec amateur squad. "He didn't shine in the pros, but when he transitioned into a referee, he excelled."

Howard Grant was Andrade's trainer for the Bute fight and drew a six-month suspension for shoving Wright in the ring.

"I lost my cool in the heat of the moment," said Howard Grant. "I apologized to him.

"We were friends. We lost one of the good ambassadors for our sport. I'm happy he's not suffering anymore. He's had it rough the last few months."

When Wright decided to become a referee, he had a first-rate mentor in Guy Jutras, who many consider the best Canadian boxing official of all time.

Fight promoter Yvon Michel, a former Canadian Olympic team coach, said he was always pleased when Wright was assigned to one of his fights.

"Most of the time, you didn't notice him in the ring and that's a good quality in a ref," said Michel. "He was a real pro.

"He knew the impact a ref had on a fight. He had good judgement. I know a lot of people will remember him from when he saved Bute but it was the perfect call. He gave the benefit of the doubt to the world champion."

Note to readers: This is a corrected story. A previous version had the incorrect cpelling of Boismenu.