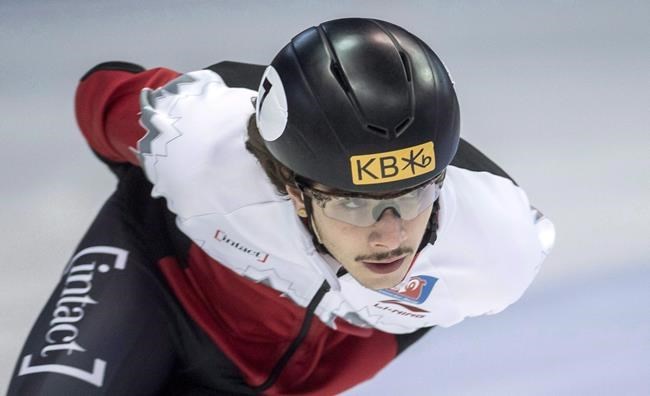 It's the second World Cup relay gold medal for the Canadian men's team in as many weeks. They also finished first at the season-opening meet in Hungary.

This is the first time since the fall of 2013 that Canada has won gold in the men's relay in two consecutive World Cup stages.

"After winning our first gold medal since November 2015, last week, the bar was high to return with another peak performance and stay on top," said Girard.

"We came on the ice ready to battle against all these strong countries and we executed our plan like we needed to. It was a tight race at the finish line, but we dominated over the last few laps. This is another good, strong win for us."

In the women's relay, Canada's Valerie Maltais of Saguenay, Que., Jamie Macdonald of Fort St. James, B.C., and Marianne St-Gelais and Kasandra Bradette — both of Saint-Felicien, Que., finished third in 4:09.729.

"It's very satisfying, it all seems to be going the right way," Bradette said. "We have been training really hard to gel together on the ice and as our individual performances have got better so our team has improved."

"We're very happy with how we raced today," Maltais said.

"That was the first time that we found ourselves in such a tight race and were able to control it. I don't remember the last time we were ahead and in control like this with two laps to go. It's a sign that the day where we will beat the South Koreans is coming and that we're on the right track."

Girard followed his gold-medal performance in Saturday's 500 with a silver in the 1,000 on Sunday in 1:28.420. Sjinkie Knegt of the Netherlands won gold and South Korea's Yi Ra Seo finished third.

TFC, D.C. United game rescheduled to Monday morning after COVID-19 test concerns
Jul 12, 2020 9:44 PM
Comments
We welcome your feedback and encourage you to share your thoughts. We ask that you be respectful of others and their points of view, refrain from personal attacks and stay on topic. To learn about our commenting policies and how we moderate, please read our Community Guidelines.