WINNIPEG — Matt Nichols seems to have found a favourite word to describe how the Blue Bombers offence will be this season. In a scrum with reporters after Tuesday's practice, the quarterback used the word "explosive" six times.
0
Jun 20, 2017 6:05 PM By: Canadian Press 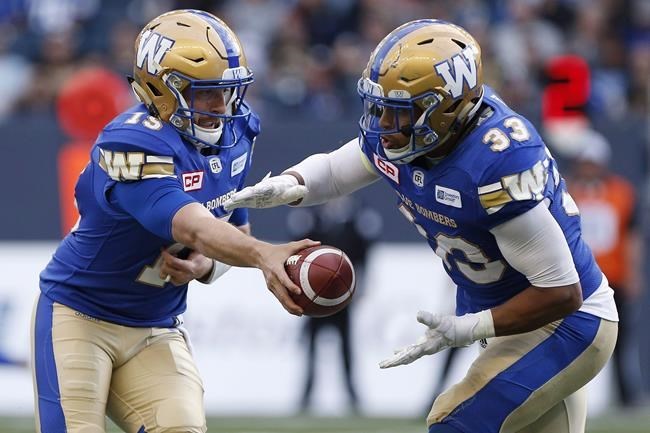 WINNIPEG — Matt Nichols seems to have found a favourite word to describe how the Blue Bombers offence will be this season.

In a scrum with reporters after Tuesday's practice, the quarterback used the word "explosive" six times.

"I think we've got the guys here to make the explosive plays and to get us to that next level and get us over the hump," Nichols said.

"I think we have a championship team here and I think the offence is going to be extremely explosive."

The team will have to wait a bit to ignite. Winnipeg has a bye the first CFL week and hits the new Mosaic Stadium field on July 1 against the Saskatchewan Roughriders.

Nichols took over Drew Willy's starting job when the team was 1-4 last season. He led them to an 11-7 record and a playoff appearance for the first time since 2011, which ended with a 32-31 loss to the B.C. Lions in the West Division semifinal.

He pointed to the team's 10 returning starters on offence, including the entire offensive line, as one of the reasons for his optimism that the club might just end its 26-year Grey Cup drought.

Canadian receiver Julian Feoli-Gudino should be a full-time starter after Rory Kohlert signed with Calgary, but veteran free-agent receiver Kenny Stafford was cut and has since joined the Edmonton Eskimos' practice roster.

Washington was five years old when his father was murdered. His mother died of a stroke at one of his basketball games when the Shreveport, La., native was 15.

"I came here to put my best foot forward and that's all I can ask for," said Washington, noting he thought his career was over in 2015 after his calf muscle split and ripped off the bone.

Winnipeg's offence was fifth in the CFL in points (497) last season, sixth in net offence (361.8 yards per game), second for completion percentage (70.1) and second in giving up the fewest turnovers (30).

While fans are hoping the offence will build off last year's turnaround, the team's defence has some question marks.

The defence led the league last season in takeaways with a lofty 59, but was last in allowing passing yards (6,033), last in net offence (407.9 yards per game) and sixth against the run (88.6 yards per game).

Veteran cornerback Chris Randle said the secondary, which has new starting cornerback Brandon Alexander, knows what it has to fix.

"We took a huge step forward from years previous by causing turnovers and that's going to be our MO (modus operandi), but we have to understand our weaknesses to get better," said Randle, who's going into his sixth season.

"We know that we gave up explosion (plays) and half of them was based on just understanding where you're supposed to be and assignment."

Winnipeg's 35 sacks finished seventh in the nine-team league and now there are two newcomers to the defensive line after last year's new guys, Euclid Cummings and Keith Shologan, were released.

Defensive end Jamaal Westerman will have former Toronto Argonauts Tristan Okpalaugo on the other end, with ex-Hamilton Tiger-Cat Drake Nevis joining six-year Bomber Jake Thomas in the middle. Okpalaugo was the East Division's most outstanding rookie in 2014, his first of two seasons with Toronto.

"I think there's question marks on everybody who doesn't make the Grey Cup," Westerman said.

Non-binary athletes navigating Canadian sport with little policy help
May 26, 2020 1:22 PM
Comments
We welcome your feedback and encourage you to share your thoughts. We ask that you be respectful of others and their points of view, refrain from personal attacks and stay on topic. To learn about our commenting policies and how we moderate, please read our Community Guidelines.