Black, other Canadians come up short on final day of artistic gymnastics worlds 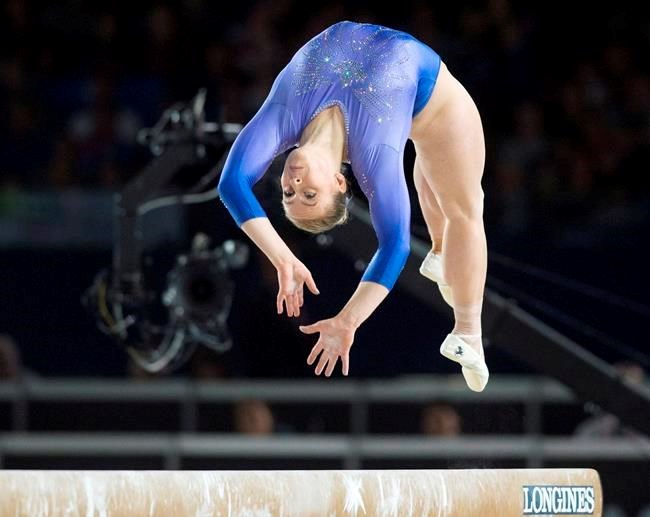 Black and teammate Brooklyn Moors failed to earn a medal at the artistic gymnastics world championships on Sunday, the last day of the week-long tournament. The 22-year-old Black finished eighth on the balance beam and seventh in the floor exercises. Moors, 16, was fifth on the floor.

"What an amazing week to be here with Team Canada competing in front of this crowd, just to have this opportunity, very thankful for that," said Black. "Of course there were some little mistakes here and there but we got through this week healthy, that was a big thing.

"We had good performances and learned a lot from the experiences."

She also finished fourth on the vault, her first individual apparatus event, on Saturday while Vancouver's Shallon Olsen finished seventh.

"For all the kids who were able to come out and see the competition, hopefully it's inspiring for them," said Black, who finished fifth in the all-around at the 2016 Olympics in Rio de Janeiro. "It's also good for them to see that even the best in the world make mistakes and you have to get back up and you have to keep fighting and you have to keep going.

"If everything is perfect all the time, this sport would be easy and it's not. It keeps you hungry and gets you going home and working hard for the next one."

"I was a little shaky," said Hurd, who was making her artistic gymnastics world championships debut. "I was a little nervous going into it because my warm-ups were not the best but I focused on staying in the moment, doing one skill at a time and just staying calm."

Black began her beam routine with a successful double spin, but she lost her balance on her front tuck and fell off the beam. The Halifax native scored a 12.400 — her worst score at this year's gymnastics championships.

"You get frustrated, everyone does," said Black, the five-time Canadian champion. "You want to go out there and do the best possible routine you can. So that's frustrating, for sure. But I was giving it my best and you have to be happy with that.

"It definitely helps not to beat yourself up too much."

Black failed to stick a couple of her landings on the floor exercises and she was penalized for stepping out, just barely, of the designated area.

Moors of Cambridge, Ont., who was awarded the elegance prize on Friday after the all-around competition, finished fifth on the floor with a score of 13.650.

"I never thought I would be here," said Moors, who was also making her worlds debut. "Just to be in the final, I was going in and didn't care if I came in eighth. I made it here and I'm so proud of myself.

"I could have been better (on the floor). I made a couple of mistakes. This was a first for me and I'm still happy. This is just the start for me."

In Sunday's other finals, Japan's Mai Murakami of Japan won gold in the women's floor exercizes, Jade Carey of the United States was second and Britain's Claudia Fragapane took bronze.

Japan's Kenzo Shirai, a bronze medallist in the vault in Rio, won the men's vault by one thousandth of a point ahead of Ukraine's Igor Radivilov. Kim Hansol of South Korea finished third.

On the horizontal bar, Tin Srbic of Croatia came in first. Meanwhile Epke Zonderland and Bart Deurloo of the Netherlands finished second and third, respectively.

Pace, health, return to winning form the goals at Flames training camp, says GM
Jul 12, 2020 7:23 PM
Comments
We welcome your feedback and encourage you to share your thoughts. We ask that you be respectful of others and their points of view, refrain from personal attacks and stay on topic. To learn about our commenting policies and how we moderate, please read our Community Guidelines.