NEW YORK — A year ago, her ranking outside the top 200, Bianca Andreescu barely squeezed into the U.S. Open qualifying. She exited in the first round, and missed the next two months with back problems. The 19-year-old from Mississauga, Ont.
Aug 23, 2019 5:09 PM By: Canadian Press 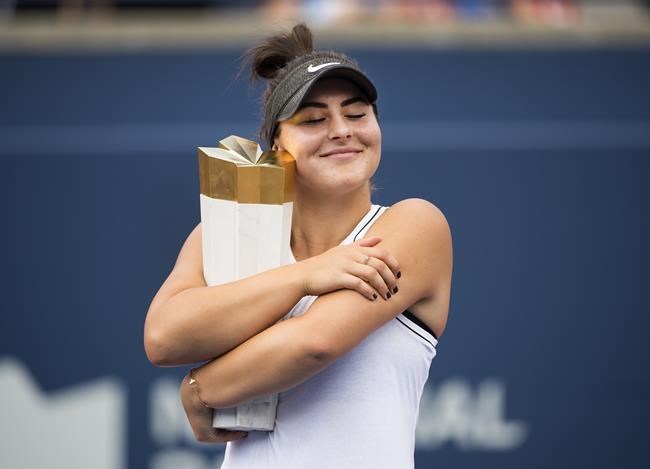 NEW YORK — A year ago, her ranking outside the top 200, Bianca Andreescu barely squeezed into the U.S. Open qualifying. She exited in the first round, and missed the next two months with back problems.

The 19-year-old from Mississauga, Ont., and Rogers Cup champion returns in 2019 as the world No. 15, the 15th seed — and a player many think can do some damage in a wide-open women's field.

"Coming from the win in Toronto, I'm feeling pretty confident," Andreescu said Friday. "I love playing on hard court. I'm here at the U.S. Open in New York, so this is a moment I have dreamed of.

"I'm really looking forward to whatever will happen these next two weeks."

On Monday, No. 21 seed Milos Raonic will play Nicolas Jarry of Chile. And unseeded Genie Bouchard will try to snap her 10-match losing streak when she faces No. 12 seed Anastasija Sevastova of Latvia.

"We have to forget Toronto, and focus on what's ahead – the Grand Slam in New York," Andreescu's coach Sylvain Bruneau said.

That the teenager would even be included among the 10 players taking part in the pre-tournament press conferences – in her first U.S. Open – is testament to how much her star has rocketed.

Three of the other four women — Naomi Osaka, Ashleigh Barty and Simona Halep — won majors this year and have been ranked No. 1. The other, Sloane Stephens, is the last American to win the US Open, two years ago.

The number of fans waiting to watch her practice Thursday evening after a long and very hot day was more evidence.

"The challenge in all this is that we went through all the stages so quickly – burned through them, really," Bruneau said. "We have to learn quickly, because the progression wasn't gradual. She hasn't had time to get used to her new status, to manage expectations.

"We have to be careful not to stray from the formula that's worked well until now. But as I tell her all the time, you can talk about it all you want. But there's nothing like living it."

Volynets, 18 months younger than Andreescu, earned her spot by winning the U.S. 18-and-under national tournament, and is No. 407 in the WTA Tour rankings.

The two have met before. Andreescu defeated Volynets 6-2, 7-6 (7) in the second round of the small WTA 125K tournament in Newport Beach in late January.

Andreescu ended up winning the tournament.

"She's a tough competitor. She gets to a lot of balls. So I'm not expecting anything easy," Andreescu said. "I know she's American too, but hopefully I can get the crowd support, as well."

Andreescu began the 2019 season ranked No. 152 and went from the qualifying to the final and upsetting two former No. 1s (Venus Williams and Caroline Wozniacki) in Auckland, N.Z.

At that tournament, her only support was physical trainer Virginie Tremblay. Bruneau had already travelled to Melbourne ahead of the Australian Open.

Things have changed. "Bianca's Bunch" is now a full-fledged platoon that befits her new status, and allows her to compete on an even playing field with the best in the world.

There is Bruneau, Tremblay, hitting partner Hugo di Feo and new physio/osteopath Kirstin Bauer, an Austrian who joined the team after the French Open.

In the background are a sports psychologist, and a physician.

"There are costs involved, obviously. But when you get to a certain level you realize it's the norm in tennis. The best have a team around them. It makes things a lot easier," Bruneau said. "It's really, really different. If I go back to when we started (at low-level $25,000 tournaments in Japan, in March 2018), it was her and I – and no one else."

Bauer came on board after Andreescu's attempt to return from her shoulder injury at the French Open. She lasted one round, then withdrew.

After that, the 19-year-old travelled to Arizona to consult a specialist. And it became a priority to stay on top of the injuries – especially for a player whose junior career was littered with them.

Tremblay said that during the period between the Miami Open in March and the Rogers Cup — a 3 1/2-month period during which Andreescu played only one match — the team worked around the shoulder injury, and focused on getting better in other areas.

"We put the emphasis on developing lower-body strength and working on her endurance and court movement," Tremblay said. "Those are her strengths, so we worked on making them even better."

Andreescu took the time to address the groin issue that popped up late in her surprising run to the Rogers Cup title. And then it was back to prepping for her first main-draw appearance at the US Open.

"I have prepared very well physically and mentally the last two-and-a-half weeks, so I'm feeling fresh," she said.