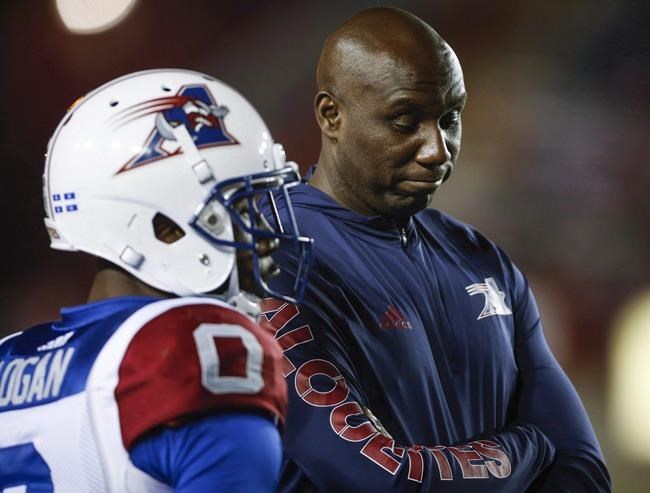 Neither team has won a game in nearly two months, with the Eskimos losing six in a row since a win over Ottawa on Aug. 10 and Montreal dropping seven straight since a victory over Toronto on Aug. 11.

Something's got to give when the Eskimos (7-6) face the Alouettes (3-11) on what is expected to be a wet field at Percival Molson Stadium.

The Alouettes, who have Drew Willy starting for the injured Darian Durant for a second straight week, need the win to avoid missing the playoffs for a third year in a row.

"You have to stay positive," Willy said Sunday. "Keep your preparation the same every week and hope you get some of the breaks.

"Football's a crazy game where if you keep working hard enough, sometimes you'll get that luck you need in certain games. A lot of CFL games come down to the last few drives. You see it throughout the league. You just want to make sure you're mentally and physically ready to go. You can get hot in this league as fast as you can get cold, so you want to get momentum going into the playoffs."

Montreal's playoff hopes hang by a thread. They are seven points behind second-place Ottawa with four games to play, so they will need to win out and hope the Redblacks lose their remaining games.

"We put ourselves in that situation, plain and simple," said coach Kavis Reed. "We have to have the mindset that this is the game that matters.

The Alouettes are coming off a 59-11 loss in Calgary, the worst in a run of lopsided defeats that has seen them go 0-3 since Reed, the general manager, took over from fired coach Jacques Chapdelaine. Just as significantly, he also axed defensive co-ordinator Noel Thorpe.

It may be the perfect week for veteran running back C.J. Gable, acquired this week from Hamilton, to make his Eskimos debut. In their last three games, the Alouettes defence, formerly among the best at stopping the run, have given up 144 yards rushing to Ottawa's William Powell, 141 yards to Toronto's James Wilder and 156 yards to Calgary's Terry Williams.

And despite the losses, Edmonton's Mike Reilly sits second in CFL passing with 4,260 yards.

"Edmonton is a very good team," said Reed. "Watching the film, you try to find a weakness and they have very few holes.

"The ball hasn't bounced their way in certain cases, but we expect a very competitive football game."

With a win, the Eskimos can move into a tie with Saskatchewan for third place in the West and move four points clear of fifth-place British Columbia, which lost 30-25 to Ottawa on Saturday.

Durant was listed third at quarterback on the Alouette's 46-man roster, but he is recovering from a lower-body injury.

In Calgary, Willy went 13-for-19 for 137 yards and one touchdown, while third-stringer Matt Shiltz completed eight of 10 for 75 yards.

"When you look at the Calgary game, Drew was very productive," said Reed. "His quarterback rating was well over 100.

"He took care of the ball exceptionally well. His reads were accurate. He was very decisive. Collectively, we didn't move the ball or score the points we wanted, but it was definitely not an indictment of the quarterback's play."

In their previous meeting this season, Edmonton beat the Alouettes 23-19 on June 30.