INDIANAPOLIS — Dale Earnhardt Jr. got the replacement he wanted. Alex Bowman got his dream job. Hendrick Motorsports announced Thursday that the 24-year-old Bowman will replace one of the series' biggest stars in the No.
Jul 20, 2017 12:33 PM By: Canadian Press 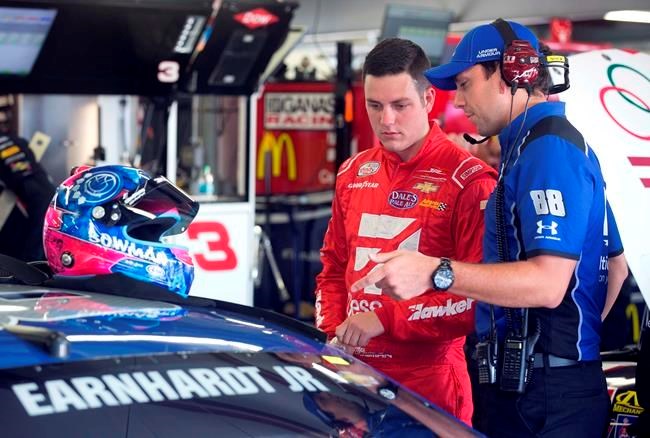 INDIANAPOLIS — Dale Earnhardt Jr. got the replacement he wanted. Alex Bowman got his dream job.

Hendrick Motorsports announced Thursday that the 24-year-old Bowman will replace one of the series' biggest stars in the No. 88 car next season after Earnhardt retires.

Bowman has big shoes to fill. Earnhardt was named NASCAR's most popular driver each of the last 14 seasons and fans of his late father often tracked Junior's results following Dale Earnhardt's fatal crash in the 2001 season opener at Daytona.

"Ever since I was a kid, racing is all I've wanted to do," Bowman said. "I've had so many people believe in me along the way. My family has sacrificed a lot and always been behind me. I would never have this chance without the support of Dale and everyone involved with the No. 88 team. To be part of Hendrick Motorsports and for Mr. Hendrick to have this confidence in me, it's just amazing."

Bowman already has some experience in this job. When the 42-year-old Earnhardt missed 18 races because of a concussion last season, Bowman started 10 of them in the No. 88, winning the first Cup pole of his career and finishing in the top 10 three times.

That was enough to get Earnhardt's attention and eventually an endorsement in May.

"Alex Bowman to the 88 next year — is that what you guys want?" Junior asked during a livestream on Periscope following the series' All-Star race. "That would be pretty awesome to see Alex in that car. That's the plan, I hope. . Yeah, Alex in the 88. That sounds good to me. That kid earned it last year. He ran good."

The 24-year-old Bowman performed well enough to get several full-time offers to drive in the Cup series this year.

Instead, he stayed patient. Bowman said he turned down each offer as he continued searching for the right situation. The Tucson, Arizona, native wound up with no full-time ride in 2017.

But with Earnhardt's concussion history, Bowman likely knew it wouldn't be long until he stepped away. Rick Hendrick's team contemplated its options for months before finally deciding bring back Bowman, who also got a 19-race majority sponsorship from the Nationwide insurance giant. Axalta Coating Systems will sponsor the No. 88 for 15 races.

In 81 career Cup starts and 50 career starts in the Xfinity Series, Bowman has never won a race. But he had 13 top-finishes and won three poles on the Xfinity circuit before blossoming in Earnhardt's car last season.

"Alex impressed the heck out of us last year with his talent, poise and professionalism," Hendrick said. "He stepped up in a very demanding situation and showed that he can run with the best and compete for wins. His ability to stay focused through it all, and the way he's handled himself since then, has shown a lot of character."

Bowman joins a series that is clearly in transition.

With television ratings and attendance sagging and three major stars — Jeff Gordon, Tony Stewart and Earnhardt — retiring since 2015, Bowman will become yet another prominent fresh face in a series that currently has five drivers who are in their 20s in the top 15.

The announcement comes two days Earnhardt attempts to qualify for his final Brickyard 400 in Indianapolis. The race is scheduled to be run Sunday.

IIHF encouraged by NHL's potential return to Olympics in '22
Jul 7, 2020 11:15 PM
Comments
We welcome your feedback and encourage you to share your thoughts. We ask that you be respectful of others and their points of view, refrain from personal attacks and stay on topic. To learn about our commenting policies and how we moderate, please read our Community Guidelines.