After strong hosting effort in '15, Canadian team back on road for Lima Pan Ams

Canada went all-in at the last edition of the Pan American Games in Toronto and was rewarded with a top-two finish. It'll be a tall order to repeat that effort at the 2019 Games, which start on Friday in Lima, Peru.
Jul 23, 2019 10:33 AM By: Canadian Press 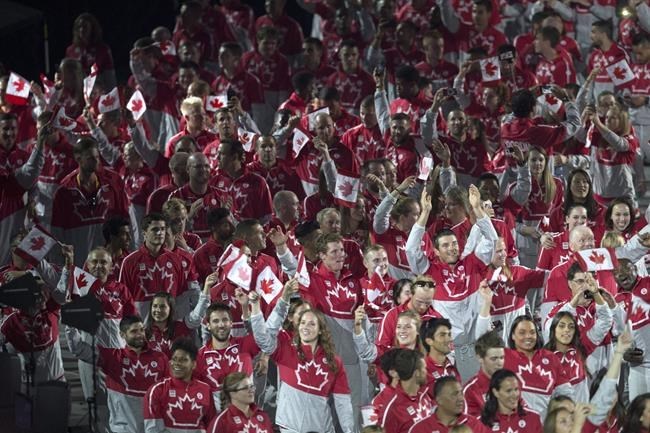 Canada went all-in at the last edition of the Pan American Games in Toronto and was rewarded with a top-two finish.

It'll be a tall order to repeat that effort at the 2019 Games, which start on Friday in Lima, Peru.

Canada won a whopping 217 medals — behind only perennial front-runner the United States — with an A-list roster of athletes keen to compete in a rare home Games. It set the stage nicely for Olympic success a year later in Rio, where Canada finished 10th overall with 22 medals.

The national team will have a different look at the Pan Ams this time around as Canada heads back on the road for the July 26-Aug. 11 Games.

"The more dress rehearsals you get to do, the smoother the actual performance will be," said Canadian chef de mission Doug Vandor. "So that's what the Pan Am Games are for. These athletes that have their sights set on Tokyo, it's the perfect dress rehearsal one year out from the Games to make sure to iron out any kinks and to just get that multi-sport Games experience."

Surfing, bodybuilding and 3-on-3 basketball have been added to the 39-sport Pan Am program. There will be 22 Olympic qualifiers in all — some will provide the final nod for the 2020 Tokyo Games — among the 62 disciplines.

The Olympic qualifier setups can be rather complicated depending on the sport.

For field hockey and water polo, for example, it's win and you're in. Other sports offer quota spots for countries with rosters to be determined closer to Tokyo.

Several countries use B-teams for some sports — the deep U.S. team from '15 was loaded with them — and Jamaica did not send top-flight sprinters like Usain Bolt four years ago. Schedule conflicts with domestic or world championships are often to blame.

For example, the Canadian swim team focused on this month's world aquatics championships instead of the Pan Ams, so a B-team will be in Lima. Athletics Canada, meanwhile, is essentially going with a split A-team and B-team.

In all, almost 500 Canadian athletes are tabbed to make the trip. Some star power is on board with the likes of decathlete Damian Warner, sprinter Phylicia George and gymnast Ellie Black.

"Our goal is to make sure that every athlete has their best performance and to get the job done of qualifying as many athletes for Tokyo as possible," Vandor said in a recent interview.

The Pan Ams can provide opportunities for athletes to reach qualifying standards. It can also be the first experience in a large multi-sport setting for many competitors, which can serve them well ahead of the Olympics.

"It takes on a whole different level," Vandor said. "So for athletes who are beginning a career and get to experience a Pan Am Games before any other multi-sport Games, it's a huge benefit in terms of going through the process and knowing what to expect.

"It's very important in the development of our NextGen athletes to let them experience this."

The Pan Ams will be like a Summer Games for athletes in sports like squash, waterskiing and 10-pin bowling that aren't on the Olympic program.

Canada is not sending teams in 3-on-3 basketball, basque pelota, bodybuilding, mountain biking, soccer and roller sports. Four national men's programs will also sit this one out, including basketball, handball, softball and indoor volleyball.

With 41 countries in the Americas set to participate, the Pan Ams will benefit from a mid-summer slot on the schedule for the second Games in a row.

It's a big improvement from the late-October schedule for the 2011 Pan Ams in Guadalajara. Transportation snafus and organizational difficulties also plagued those Games in Mexico.

Lima organizers have faced a few hurdles in the leadup to the Games. Skateboarding was axed from the program in May due to qualification disputes and the redeveloped velodrome for track cycling was completed just a month ago.

There are no live television plans for the Pan Am Games in Canada. CBC will have some event coverage online.

The Pan Ams will be the largest sporting event ever held in Peru. The Parapan Am Games are set for Aug. 23-Sept. 1.

Leylah Annie Fernandez advances, while Denis Shapovalov eliminated at French Open
Oct 1, 2020 2:28 PM
WHL's Moose Jaw Warriors announce formal review of primary team logo
Oct 1, 2020 1:50 PM
Montreal Impact acquire striker Mason Toye from Minnesota FC
Oct 1, 2020 1:46 PM
Comments
We welcome your feedback and encourage you to share your thoughts. We ask that you be respectful of others and their points of view, refrain from personal attacks and stay on topic. To learn about our commenting policies and how we moderate, please read our Community Guidelines.