After a year of big strides, B.C. Lions looking to unseat Stampeders in 2017 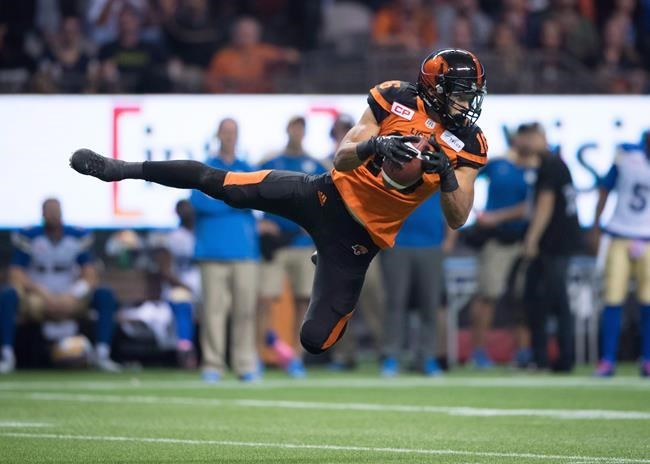 VANCOUVER — The B.C. Lions took some important strides in 2016.

With legendary head coach Wally Buono back on the sidelines, the CFL club rebounded with a 12-6 record after a couple disappointing seasons before winning a playoff game for the first time in five years.

Then the Lions ran into the powerhouse Calgary Stampeders in the West Division final and learned first-hand that the difference between good and great is in the details.

"We took big steps in terms of production and guys making plays, but there were still a lot of mistakes," B.C. wide receiver Bryan Burnham said while reflecting on that 42-15 blowout loss in November. "You play a team like Calgary, they expose that.

"We've got to get the little things right."

The Lions are keenly aware that unseating the Grey Cup finalists — a franchise that's topped the West three of the last four seasons while going a combined 58-13-1 — will require razor-sharp focus.

"Part of what this team has to do is mature (and) understand when you play big games you have to rise up to that level," said Buono. "That's sometimes just part of growth."

Despite the disappointing end last season, there's lots to get excited about on the West Coast ahead of the Lions' opener against the Edmonton Eskimos on Saturday.

"We have a very talented team, that's one thing we know for sure," said B.C. defensive lineman Bryant Turner Jr. "I can't wait to see what happens."

Coming off his first full year under centre, quarterback Jonathon Jennings looks poised to build on a breakout campaign where he threw for 5,226 yards and 27 touchdowns, with the only blemish a CFL-high 15 interceptions.

"I want to focus on being smarter in general with the football," said Jennings, who became just fourth QB in franchise history to surpass 5,000 yards.

The 24-year-old has another weapon after B.C. added free-agent deep threat Chris Williams to an attack that already includes Emmanuel Arceneaux and Burnham — the CFL's third- and fourth-leading receivers last season.

"I've tried to coach against Chris for a lot of years," said Buono, also the club's general manager. "Chris makes you aware of who he is and where he is."

Williams might not be ready for the opener as he continues to rehab a surgically repaired knee, but even without the speedster there are plenty of weapons.

The electrifying Chris Rainey is back to return kicks — along with Williams when he's healthy — while also getting some touches out of a backfield where Jeremiah Johnson will be leaned on more heavily after splitting time with the departed Anthony Allen in 2016.

Canadian receiver Shawn Gore retired, but the Lions have veteran Marco Iannuzzi and second-year man Shaq Johnson to help pick up the slack as nationals.

B.C. looks primed to start four Canadians on the offensive line, a move that would allow for another American at a skill position, after acquiring former NFLer David Foucault from Montreal for six-time all-star Jovan Olafioye.

Swayze Waters, meanwhile, has been brought in to handle all three facets of the kicking game after Richie Leone inked a deal with the Arizona Cardinals.

The biggest question mark is undoubtedly on defence, where half the starters have moved on. Linebacker Adam Bighill, the CFL's top defensive player in 2015, signed with the New Orleans Saints, while defensive back Ryan Phillips was released before joining Montreal.

The battle to replace Bighill on the weakside in training camp came down to Tony Burnett and Micah Awe, with both making the 46-man roster.

B.C. allowed the fewest yards against last season and tied for the league lead in sacks with 52, but had just 29 takeaways, including a league-low nine interceptions.

The Lions will be looking for a lot more out of their secondary, especially with Steven Clarke, Ronnie Yell and T.J. Lee back healthy following serious injuries in 2016.

"It's sickening, annoying," Lions defensive co-ordinator Mark Washington said of his team's lack of picks in 2016. "We had opportunities to change the game and we weren't doing that."

The defensive line lost Alex Bazzie's 11 sacks when he decided to test the NFL, while Jabar Westerman signed with Winnipeg.

Lions linebacker Solomon Elimimian, the league's most outstanding player in 2014, and top defender two of the last three years, is now the unquestioned leader of a unit that might have some early growing pains.

Not that he's willing to accept any.

"As long as we have the right mindset, athletically we're capable of getting the job done," said Elimimian. "We're young in some areas, but that's not to say we can't be good in those areas."