2019 Memorial Cup: A look at each of the four teams at this year's tournament

HALIFAX — It's down to the final four. A season that began with 60 eligible teams spread across nine provinces and four states competing for the Canadian Hockey League's biggest prize is down to three league champions and a host entry.
0
May 16, 2019 12:19 PM By: Canadian Press 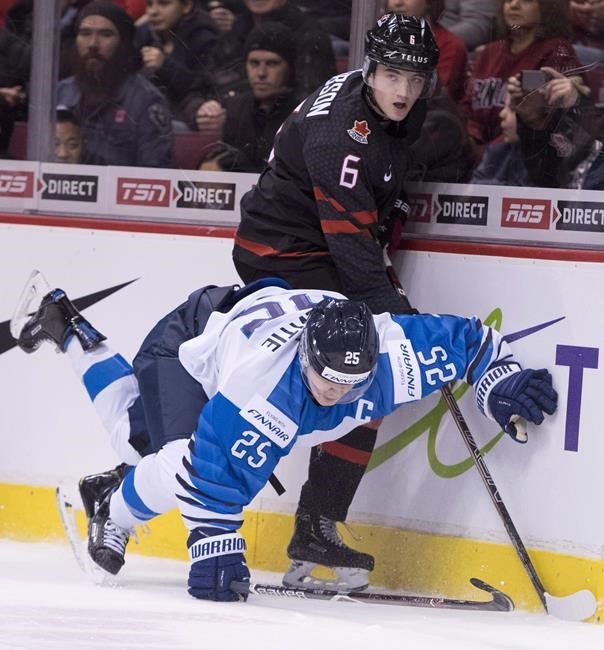 HALIFAX — It's down to the final four.

A season that began with 60 eligible teams spread across nine provinces and four states competing for the Canadian Hockey League's biggest prize is down to three league champions and a host entry.

Preliminary-round play at the national major junior championship runs until Wednesday, with the championship game set for May 26.

Here's a look at the four teams battling for the Memorial Cup.

The skinny: NHL draft-eligible winger Raphael Lavoie paced the Mooseheads offence through the QMJHL playoffs, leading all scorers with 20 goals in 23 games. Halifax nearly suffered a first-round upset, having to go to a Game 7 against the Quebec Remparts just to advance. A first-round exit could have raised questions about the Mooseheads being good enough to compete with three league champions as the host team. But they proved their legitimacy by sweeping the Moncton Wildcats, taking down the higher-ranked Drummondville Voltigeurs and going six games with Rouyn-Noranda for the President Cup.

Halifax has eight NHL prospects on its roster, including defenceman Jared MacIsaac (Detroit), who was part of Canada's 2019 world junior team, while veteran forward Samuel Asselin did his part after being acquired from defending Memorial Cup champion Acadie-Bathurst, leading the team in the regular season with 48 goals and 86 points in 68 games. The Mooseheads went 25-5-4 at the Scotiabank Centre this season for the third best winning percentage on home ice (.794).

Halifax is going for its second Memorial Cup after a Nathan MacKinnon-led squad beat the Portland Winterhawks in the 2013 championship.

Regular-season record: 59-8-1, first in QMJHL standings, No. 1 in CHL rankings

The skinny: The Huskies used a 25-game game win streak in the regular season to prove they were for real, eventually vaulting past the Prince Albert Raiders into the No. 1 spot in the 60-team CHL rankings. Abbandonato, who led the QMJHL with 111 points in 68 games to earn the Jean Beliveau Trophy, got his team to the post-season, and then Rouyn-Noranda's depth took over when needed to capture its second league title.

Abbandonato played the first two rounds against the Shawinigan Cataractes and Victoriaville Tigres before going down with mononucleosis ahead of Round 3. Forwards Joel Teasdale (the QMJHL post-season points leader with 34 in 20 games), Felix Bibeau and Rafael Harvey-Pinard and defenceman Noah Dobson carried much of the workload offensively against the Rimouski Oceanic without their captain, who returned for the final, while Samuel Harvey did his part in net with a playoff-best 1.97 goals-against average. Dobson, part of last year's Acadie-Bathurst Memorial Cup championship team coached by Pouliot, went on to be named QMJHL playoff MVP with 29 points in 20 games.

Rouyn-Noranda has never won a Memorial Cup, falling 3-2 in overtime against Mitch Marner, Matthew Tkachuk and the London Knights in the 2016 tournament final.

The skinny: The Storm had one of the most difficult roads to the Memorial Cup, having to go through the top two teams in the OHL West before knocking off the No. 4-ranked team in the country, the Ottawa 67's, in the OHL final. After sweeping the Kitchener Rangers, they fell behind 3-0 to the London Knights in Round 2 and 3-1 to the Saginaw Spirit in Round 3 and had to overcome seven elimination games just to reach Ottawa. Guelph didn't crack the CHL top-10 rankings despite its firepower, in large part because the Storm roster didn't come together until January. General manager/coach Burnett made five major trades at the deadline for a playoff push, and it paid off.

Guelph is arguably the best team on paper, featuring four Canadian junior national team members, and was led in the playoffs by a deep core featuring childhood friends Nick Suzuki and captain Ratcliffe, as well as Nate Schnarr, a 102-point producer in the regular season. Suzuki was one of the players Burnett acquired mid-season and the Montreal Canadiens prospect went on to win OHL playoff MVP with 42 points in 24 games. He found the scoresheet in 17 of his final 18 post-season games to upset three teams that finished higher than Guelph in the standings.

Guelph has never won a Memorial Cup, falling twice in the tournament final. First in 1998, a 4-3 overtime loss to Marian Hossa and the Portland Winterhawks, and a 6-3 defeat against Curtis Lazar and the Edmonton Oil Kings in 2014.

The skinny: The Raiders are back at the Memorial Cup for the first time in 34 years after beating the Vancouver Giants in seven games in the WHL final. Their return to the national championship isn't a fluke either as Prince Albert was the No. 1-ranked CHL team for the majority of the season until being bumped to No. 2 by Rouyn-Noranda down the stretch. Habscheid, who became the eighth WHL coach in history to reach 500 wins and 1,000 games this season, easily led his club past the Red Deer Rebels, Saskatoon Blades and Edmonton before needing an overtime goal in Game 7 from trade-deadline acquisition Dante Hannoun to get by Vancouver.

The Raiders are a balanced lineup offensively, with draft-eligible Brett Leason, Noah Gregor, Aliaksei Protas and Hannoun sparking much of the goal scoring. Goaltender Ian Scott, a Toronto Maple Leafs prospect, built off his strong regular season and was named WHL playoff MVP for his efforts. He went 16-7 and led all netminders with a 1.96 GAA, .925 save percentage and five shutouts.

Prince Albert is going for its second Memorial Cup title after its 1985 championship, when coach Terry Simpson led the Raiders to a 6-1 win over Shawinigan in the final.

Raptors' Ujiri says conversations about racism can no longer be avoided
May 31, 2020 3:54 PM

Canada's Davies helps Bayern top Fortuna 5-0 to take 10-point Bundesliga lead
May 30, 2020 4:39 PM
Comments
We welcome your feedback and encourage you to share your thoughts. We ask that you be respectful of others and their points of view, refrain from personal attacks and stay on topic. To learn about our commenting policies and how we moderate, please read our Community Guidelines.