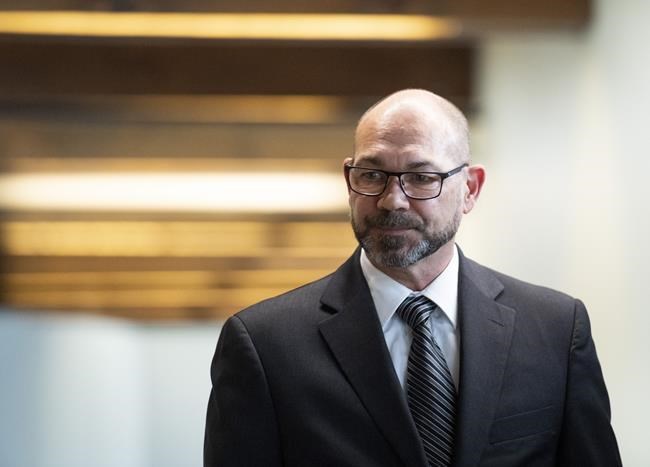 The Canadian Armed Forces' top prosecutor announced Wednesday that he was withdrawing all four charges against chief military judge Col. Mario Dutil in a case that had been seen as a key test of the military-justice system.

Dutil was first charged by military police in January 2018 over allegations of having had an inappropriate relationship with a subordinate and signing a travel claim that contained false information. He was the first person to be charged while serving in that role.

Dutil's deputy, Lt.-Col. Louis-Vincent d'Auteuil, presided over the court martial at first, but eventually recused himself and refused to name another military judge to take over, saying two of them had conflicts of interest and the third wasn't bilingual enough.

Col. Bruce MacGregor, the director of military prosecutions, subsequently asked the Federal Court to order one of those judges to preside over the case.

MacGregor insisted on keeping the case within the military-justice system rather than the civilian system, arguing it was the most appropriate venue to weigh the charges against Dutil.

But Federal Court Justice Luc Martineau rejected MacGregor's request last week, saying that an order to have one of the other judges take the case would do irreparable damage to Dutil's constitutional right to a fair trial.

Martineau said the tidiest solution would be to name an outside civilian judge to hear the case, but also that the real problem is that the law on military justice never contemplated a scenario where the military's top judge would face charges himself.

In announcing the withdrawal of the charges against Dutil, MacGregor said he would not appeal Martineau's decision even as he insisted that all military personnel, "regardless of rank or appointment, are held to the same, highest standard of conduct.

"In this specific case, alleged wrongdoing was reported and investigated by proper authorities, charges were laid and moved forward in accordance with the law," MacGregor said in a statement.

"However, after conducting a detailed review of the Federal Court's decision to dismiss my application for judicial review, and carefully considering all circumstances surrounding this case, I believe that it is no longer in the public interest to proceed with this trial."

Asked why MacGregor didn't seek to have the Federal Court or the military's appeal court hear the case, as Martineau recommended, a spokeswoman said that decision would ultimately rest with d'Auteuil "and is not an option open to the director of military prosecutions."

While the prosecutor's decision is independent, Defence Minister Harjit Sajjan told The Canadian Press that the government would review the case to determine what improvements need to be made to the military justice system.

"I look forward to getting briefed up from the JAG (judge advocate general) from this decision and we will look towards improving this," Sajjan said in reference to the military's top legal officer. "One thing I can assure you, the military justice system will make the changes necessary."

Dutil, who has been the chief military judge since 2006, was originally charged with eight counts in relation to allegations he had an inappropriate relationship with a subordinate and knowingly signed a travel claim for $927.60 that contained false information.

Four of the charges were dropped at the start of the court martial in June 2019, where Dutil's lawyer served d'Auteuil with a subpoena before challenging the presiding judge's impartiality and asking him to recuse himself.

A publication ban covered details of that portion of the hearing, which included Dutil testifying about his relationship with d'Auteuil, whom he described as a "confidant," but was later lifted before d'Auteuil recused himself.

This report by The Canadian Press was first published March 11, 2020.

Genetic testing and hitching a ride with the British; In The News for July 10
Jul 10, 2020 4:15 AM
Canada asks British military for help flying troops to and from Latvia
Jul 10, 2020 4:15 AM
The latest numbers on COVID-19 in Canada for Friday, July 10
Jul 10, 2020 4:00 AM
Comments
We welcome your feedback and encourage you to share your thoughts. We ask that you be respectful of others and their points of view, refrain from personal attacks and stay on topic. To learn about our commenting policies and how we moderate, please read our Community Guidelines.