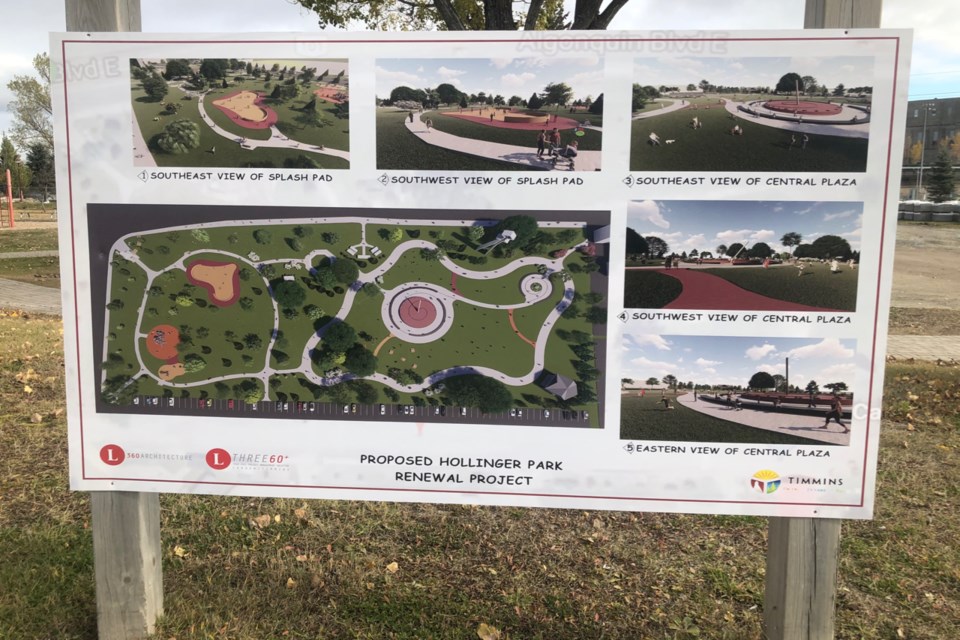 A board at Hollinger Park shows the work being done at the site. Maija Hoggett/TimminsToday

After being closed to the public last summer, the final remediation work at Hollinger Park is underway, according to the City of Timmins.

After shutting down for the COVID-19 pandemic, municipal construction projects were allowed to restart this week.

"Mobilization of equipment and supplies to complete the final work on the Hollinger Park Improvement Project has commenced this week and construction will ramp up starting next week," said Gerard Paquete, Timmins supervisor of projects, in a news release.

Much of the popular park was closed year for upgrades. Improvements were made to the splash pad, a walking path. There is also refurbishment work on the Grandstand, ball field, and more.

Last year, Interpaving was awarded the $1.4-million project for the upgrades and beautification.

The work was expected to be done mid-November 2019, but was delayed due to the late delivery of concrete forms for the central plaza.

According to the city, the work left to be done includes the central meeting space, which includes a headframe and sundial sitting on an elevated circular concrete platform surround by paving stones, and the paving of the main entrance and parking lot. There is also additional landscaping work to be done, sodding and seeding, and completing the remaining trail connection.

Director of community and development services Mark Jensen expects there is about four weeks of work left.

To protect the hydro seed and sod from damage, fencing will remain on site until the grass takes.

The city says a grand opening for the refurbishments will be announced in the summer.

At the grandstand, in November 2019 the city said the contracted works were complete and the planks at the back of the structure were slated to be done in the spring of 2020. The Marco Clay had also been spread on the infield and baseball will return in 2020.

End of an era. CTV closes its North Bay location
May 29, 2020 4:08 PM
Comments
We welcome your feedback and encourage you to share your thoughts. We ask that you be respectful of others and their points of view, refrain from personal attacks and stay on topic. To learn about our commenting policies and how we moderate, please read our Community Guidelines.