Will baseball be back at Hollinger Park?

And what should be included in the grandstand refurbishment?
0
Feb 2, 2018 2:46 PM By: Andrew Autio, freelance
Previous Next
1 / 1 Members of the Timmins Men's Baseball League are still anxiously awaiting word on when, and if they can return to Fred Salvador Field. Andrew Autio for TimminsToday
Expand
Previous Next

The sights and sounds of evening baseball in Hollinger Park are likely to return, but when is anybody's guess.

City council was presented with several concepts for the re-design of the historic park this week by consultants and city staff. The discussion last nearly 80 minutes, and was a lot to chew on for council, considering they are being asked to make some important decisions sooner rather than later.

Regarding the south portion of the park, two options were presented, both included the construction of an outdoor amphitheatre in the southwest corner. The size of that depends greatly on whether or not the city will keep the existing baseball diamond known as Fred Salvador Field, where the much discussed historic grandstands are located.

"Its meant to be an event space," said Kate Preston of Dillon Consulting, adding that an amphitheatre would give the city the ability to host events, both big and small.

2018 will mark the second straight season that the Timmins Men's Baseball League (TMBL) will be unable to use the field they used to call home. Last year, it was due to preparations for the city-run Stars and Thunder festival, and this year, it's due to a combination of the festival and soil remediation efforts.

They played the 2017 at a much smaller field next to Ecole Secondaire Theriault, which required extensive work to bring it up to adequate condition.

It is unclear if the city plans on continuing the festival moving forward. However, the city received a $370,000 grant from the Northern Ontario Heritage Fund Corporation last year, some of which is to be used on refurbishments to the grandstands. They were well used by spectators on the busier days of the festival. 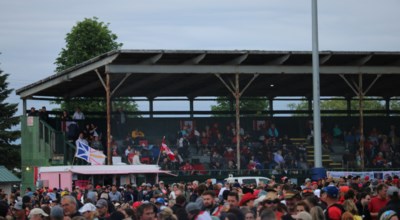 The historic grandstands in Hollinger Park also proved quite useful for the Stars and Thunder festival. Andrew Autio for TimminsToday

"What's happening now though is an intense use on the baseball diamond. So there are costs to having to maintain and fix the baseball diamond after such events," said Preston, which led the consultants to explore the option of removing the diamond permanently.

A 'consolidated masterplan' for the park will be drafted, which will include council feedback.

Mayor Steve Black told the consultants he feels there is a consensus among council for keeping the baseball diamond.

"I know there may not be consensus in terms of the designers and staff on that theory, but I believe council is mostly on the same page in terms of keeping baseball in that park."

Councillor Noella Rinaldo inquired about washroom and changeroom facilities in the grander scale of the park re-design, especially considering the strong possibility of an expanded splash pad on the north side of the park, and renewed public interest/

The consultants suggested they could be incorporated into the refurbishment of the grandstands.

"Its not to suggest that it needs to be completely changed, but it could be re-worked to serve more contemporary uses and of greater function. I think it would be good location to consider washrooms, " Eha Naylor of Dillon Consulting told Rinaldo, adding that some of the seating area could be reduced.

Back in October, TMBL President Jamie Dallaire sent a letter to Black summarizing a league meeting in which a strong sentiment to return to Fred Salvador Field was indicated. Although the league adjusted to the new surroundings at Theriault, there were several issues, including no dugouts for the teams, no lights. and no access to water.

The letter also included some suggestions for the re-design at Hollinger. Among them is the idea of building proper dugouts into the field level of the grandstands, as they are currently a considerable trek from home plate. The entire infield would be moved in a lot tighter to the grandstands, as well the outfield fences could be brought in by 25 to 40 feet. TMBL said it would speed up the game, make for a more intimate baseball atmosphere, as well as saving plenty of space in the park.

No members of council showed any interest in permanently removing the diamond this week, which is welcome news for local sports enthusiasts. The overall re-design of Hollinger Park will be back on the agenda for the next meeting on February 6.

Fate of historic Hollinger grandstand still very uncertain
Jan 20, 2017 3:00 PM
Comments
We welcome your feedback and encourage you to share your thoughts. We ask that you be respectful of others and their points of view, refrain from personal attacks and stay on topic. To learn about our commenting policies and how we moderate, please read our Community Guidelines.