Two-Spirit: An old idea is informing our evolving understanding of gender

It wasn’t until Leisha Neuman began to learn about her Indigenous heritage that they began to understand the feelings they had lived with their entire life
Oct 17, 2020 9:00 AM By: Jenny Lamothe, Local Journalism Initiative Reporter 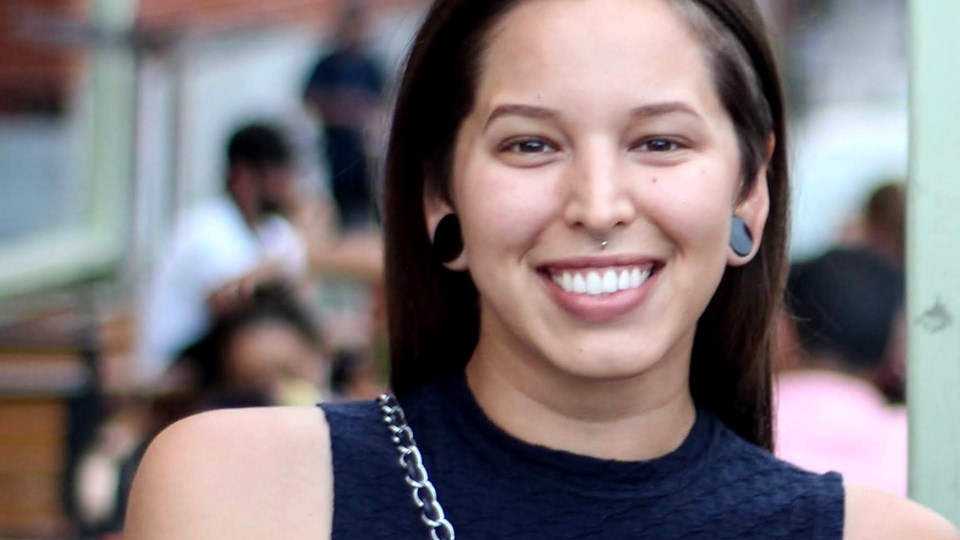 Leisha Neuman didn’t begin to learn about their Indigenous heritage until going to college. Interacting with local elders gave them a window not only into their heritage but into the confusion over their gender they had lived with since childhood. (Supplied)

But in a binary western world, choices are yes or no, this or that, one or the other. There are only two sides — at least, that’s preferred for simplicity sake. But even now that so many are beginning to understand that gender in particular does not exist in a binary — there aren’t just two options to choose from — two-spirit can be a difficult concept to understand.

After all, it was for Neuman.

For while Neuman is an Indigenous person, they (Neuman uses the personal pronouns they/them) were not raised in that culture. Their father is caucasian, and their Indigenous mother was adopted by a white family in childhood, losing much of her cultural knowledge and identity. It wasn’t until Neuman entered post-secondary school at Cambrian College, meeting the elders available for student support, that they truly understood themselves, and their two-spirit nature.

Neuman, who was assigned a female gender at birth, was terribly confused about gender, viewing it through the lens of binary the way Western society dictates. Though they considered transitioning, “for me, it wasn’t that I felt I wasn’t a woman, because sometimes I did; it wasn’t that I didn’t feel like a man sometimes, but I didn’t feel like I could fully transition to one or the other.”

It was when Neuman began to examine themselves, their nature and their spirituality through the lens of their history, and with the support of the elders, that Neuman found the answer to their question. Not one or the other, but a third option: both.

When Neuman looked both before colonization and even as recently as the 1990s, they found answers in the ideas of their pre-contact ancestors, and in the ideas of Elder Myra Laramie, who in 1990 had a dream: a vision of a term and concept that could offer Indigenous people who were struggling under the binaries of Western gender a chance not only to know themselves, but to do so within their framework of their people and history.

“We can use this term as LGBTQ, non-binary gender-fluid people,” Neuman said, “to acknowledge where we were before contact, and also acknowledge that the Western ideas of gender and sexuality don’t align with our traditional views.”

Western binary concepts of gender identity are built around, well, genitals. Both exterior and interior reproductive parts. And if you’re a gambler, betting on something easily visible is a pretty safe bet. But what if the infallible biology of Western gender identity has some faults.

Consider this. Intersex is a general term used for situations in which a person is born with reproductive or sexual anatomy that doesn’t immediately fit the description of biological ‘female’ or ‘male’.

While it is incredibly difficult to pinpoint the actual number of intersex children born — due to the more case by case nature of these judgements — the Intersex Society of North America bases their statistics on experts at medical centres, who examine the number of times a specialist in sexual differentiation — yes, that exists — is called in to make a pronouncement.

“The number comes out to about 1 in 1,500 to 1 in 2,000 births,” the organisation states. “But a lot more people than that are born with subtler forms of sex anatomy variations, some of which won’t show up until later in life.”

So if Western binary concepts of gender are based on what could be seen as a faulty premise or a subjectively applied differentiation, then how perfect is our yes/no, man/woman system? In fact, how are we to determine if there was ever intent for binary in the first place?

Not only does Neuman identify as two-spirit, but they have devoted themselves to offering that understanding to others who might be struggling in the same way they did. Not only does Neuman operate the Two-Spirit Sudbury Facebook group, but also works as a Two-Spirit Worker for the Ontario Aboriginal HIV/AIDS Strategy (OAHAS) in Sudbury. When she educates others about the term, Neuman describes the very different way First Nations would determine gender. It had nothing to do with parts.

For gender is not a matter of identity with First Nations, but more of an organisation strategy. Roles are based on your desire and ability to fulfill them, and every role is equal to the success of the community.

In her article “Culturally Relevant Gender-based Analysis: A tool to promote equity”, published by the Canadian Women’s Health Network in support of the Native Women’s Association of Canada’s education framework, Erin Wolski of the Chapleau Cree First Nation says that prior to first contact, many Aboriginal societies were matrifocal in nature — specifically as the guardians of family, community, tradition, culture and language.

“Aboriginal women were central to all of this as teachers, healers, and givers of life,” she wrote. “While Aboriginal men and women had distinct roles, their roles were equally valued.”

But with the arrival of European colonizers, came the systematic breakdown of the delicate balance that existed among genders; a Euro-centric point of view could never be described as being based on equality of the genders. It’s much more patriarchal than that.

But it was this equality that made First Nations work so well, and also made it, well, less of a big deal when someone felt they did not suit the community role that they currently held. Because all genders have valued, respected and appreciated roles within their community.

And for many Indigenous peoples, rather than needing to choose to transition to the opposite gender, to fully embrace only the masculine or feminine, there was the third option: to be both. To embrace all sides of oneself, simply through which roles you desired as part of your work, and your identity.

Neuman said that in traditional teachings, any child who shows that they may not be comfortable in the role they have been given — but not quite understand why — may take part in a ceremony to help bring out their gender, or in many cases, to help them choose the third. For instance, it could be a dance.

“If a young child was asking about skirt wearing or anything like that, they would have a big dance party kind of a ceremony,” Neuman said. “They invite other local communities to come in and they dance.”

If this child’s personal style of dance is more similar to the dances of the masculine community members, opposite their believed gender, then the child is taken to the river, bathed, given a skirt and a new name, and is now referred to by that gender.

Neuman also notes a surprising, but highly effective historical ceremony to encourage a child to choose their gender. It involved fire. Within a room, two specific-to-gender-role items would be left in the centre. For instance, a bow and arrow to represent the hunter, or a baby basket to represent a caregiver. When the room was lit on fire — yes, lit on fire — the child had to choose which item that meant the most to them. If a previously believed to be male child chose the basket for children, or a girl selects the bow, they would now be considered of their newly chosen gender.

If the child chose both items, they would be honoured as Two-Spirit, and fulfill their place among their people as someone who was chosen by the Creator; who is close enough to the spirit of all things that they were awarded the blessing of both genders at once. Both warrior and caregiver, at peace within one body.

Now growing up, generations of Indigenous people are left confused, without the foundation of their cultural identity to frame themselves within. Even with the continual acceptance of transgender people within society — as slow as it may be — Neuman says there was something so different about the way they felt, and something there was no word in their vocabulary for.

Then they found it. And so, Neumann chose both. Niizh Manidook.

Now, as Neuman understands more about themselves and their identity, they can pass this knowledge on to others who are struggling. Especially in this regard is a program Neuman is working on in partnership with other organisations called New Horizons to aid elders who are two-spirit, but have had to hide their identities all their lives. It is a chance for them to feel whole once again.

It is a chance for Neuman to live a complete life, on both sides of gender. They have been given the sacred fire teachings, though that is a tradition reserved mostly for the men of the community. Neuman does of course wear their skirt when tending it, just to keep the men on their toes. “If you can clean the cedar,” Neuman said, “then you should clean the cedar.”

For Neuman, it’s about taking the gift of a Two-Spirit identity, and passing that gift to others. “Two-Spirit people are helpers and healers,” says Neuman. “And that’s what I’m trying to do; that’s what I am supposed to be doing with the gifts that I was given.”

If you are interested in discovering Two-Spirit identity for yourself, you can visit www.facebook.com/twospiritsudbury.