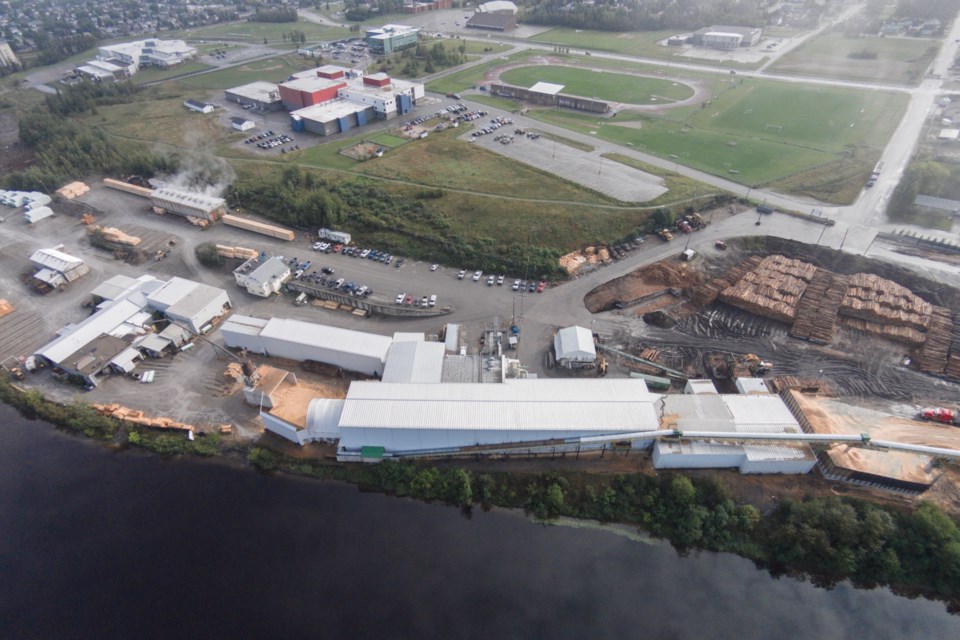 An aerial view of EACOM's sawmill in Timmins. Supplied photo

Amid the latest softwood lumber dispute between Canada and the United States, EACOM Timber Corporation has invested in its Timmins sawmill and diversified its offerings.

At the United States border, Canadian softwood lumber producers are being charged tariffs.

For EACOM, the rate is a 20.23 per cent duty on its softwood lumber shipments, which includes a countervail duty and an anti-dumping duty.

With operations in Quebec and Ontario, EACOM public affairs director Christine Leduc explained most of their wood is from Crown land.

“That’s what’s at the heart of the dispute, right, the claim that we’re subsidized even though Canada has been successful in challenging these actions previously. Here we are again in 2017 being imposed a duty that considers programs that we’ve previously defended,” she said.

For a one-year period after its expiry the U.S. agreed to not impose new tariffs. That period ended in October 2016. In April of this year, the U.S. Department of Commerce announced new tariffs on Canadian softwood lumber.

Canada is challenging the duties under the North American Free Trade Agreement, and has initiated proceedings with the World Trade Organization.

Leduc said EACOM is hopeful that the millions of dollars being held up in deposits at the border will be returned.

According to Leduc, the U.S. softwood lumber industry meets about 70 per cent of its domestic demand. Canada has helped supply the rest.

About 50 per cent of EACOM’s volume is shipped to the United States, while the other half stays in Canada.

“We are well located to supply good-quality softwood lumber for home construction. Nowhere else in the world do they build with softwood lumber homes the way that we do in North America,” she said.

With the extra costs at the border, the end consumer is paying for it.

“It really also hurts the American consumers because it increases the price of housing. And it’s hard enough to have stable homeownership these days,” Leduc said.

As areas rebuild after this year's hurricanes, she said the demand for lumber and construction materials is going to increase.

If the dispute drags on for years, Leduc said it will be challenging for the industry.

“Because it’s going to be about financial resources and how much do you have to face whatever the market conditions are,” she said.

With six facilities in Ontario, she said EACOM is “committed to making it out on the other end the softwood lumber dispute.”

Even in a year of trade dispute, Leduc said the company made strategic investments.

“The products coming out of Sault Ste. Marie, it’s an engineered wood product, so it diversifies our product offering,” she explained. “Otherwise, EACOM, we’re mostly a pure-play lumber producer and so that was a good investment.”

In Timmins, a continuous dry kiln was installed at the sawmill.

“There are some continuous dry kilns in British Columbia and out west. But for us, this is the first time you’re seeing a kiln like this east of the Rockies,” she said. “We’re really trying to put in place some good technology, some state-of-the-art technology and Timmins has received a lot of investments.”

By continuously cycling lumber through the kiln, the system speeds up the wood drying process.

It also boosts capacity at the mill.

OPP vehicle rear-ended on Highway 11 near Smooth Rock Falls
Feb 28, 2020 3:57 PM
Comments
We welcome your feedback and encourage you to share your thoughts on this story. We ask that you be respectful of others and their points of view, refrain from personal attacks and stay on topic. To learn about our commenting policies and how we moderate, please read our Community Guidelines.