Amelie Bouchard is the latest basketball product taking her talent to the next level
May 4, 2021 7:14 AM By: Andrew Autio 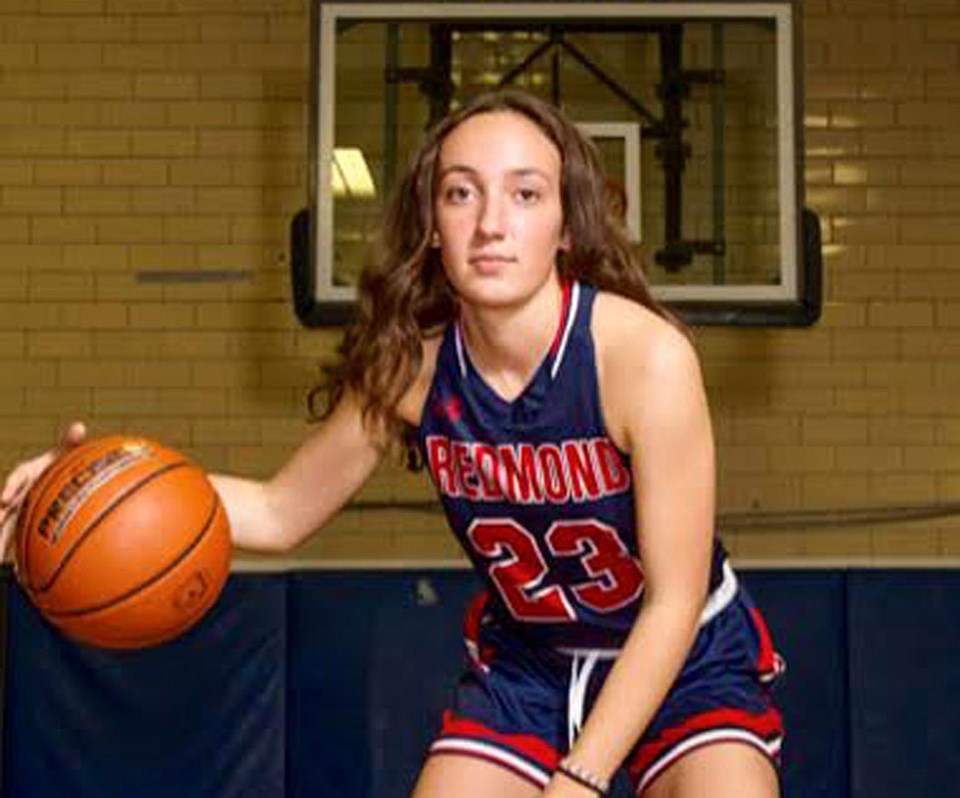 Amelie Bouchard will become the latest Timmins basketball product to take her talents to the next level, as she will be joining the Acadia University Axewomen this fall. Supplied

Amelie Bouchard will become the latest Timmins basketball product to take her talents to the next level, as she will be joining the Acadia University Axewomen this fall.

The 5-foot-7 point guard has spent the last two seasons in Toronto playing for the Father John Redmond Redhawks of the Ontario Scholastic Basketball Association (OSBA), after playing her first two years of high school with École secondaire catholique Thériault.

With the complications and various shutdowns related to the COVID-19 pandemic, it has been well over a year since Bouchard has played in a competitive game.

It’s been a challenging year basketball-wise.

“Last summer I was playing outside every day; practising and doing team Zooms with my high school team and doing strength workouts,” said Bouchard.

“This year, at the beginning of the year we did have practices. Like twice or three times a week. Then it shut down around Christmas, so I came back home, and trained indoors. Didn’t really do much basketball-wise, so it was more strength, speed, and conditioning. Then I went back to Toronto, trained in gyms, then again, it was shut down.”

Bouchard is another product of the Timmins Selects youth basketball program, which she began in Grade 4 and kept playing through Grade 10.

After two standout years at Thériault, Bouchard was recruited to make the jump to the OSBA with the Redhawks.

“It was exciting at first, because it was moving up again better competition. But it was hard because I came from a French school, so going to an English school was difficult,” she said.

However, Bouchard was eventually able to adapt and get comfortable with her surroundings.

“I was in a good environment. I had good teammates who helped me get through the process, and the basketball was a lot better. It was a fun environment to be around.”

Unfortunately, her senior season was all but snuffed out due to the pandemic, but Bouchard looks back fondly on her junior season, which was completed in its entirety, and first with the Redhawks.

“I think the season went well, but I had a lot of injuries. At the start of the season, I was out for two games because of a shoulder injury. Then mid-season I had a concussion, so I didn’t play as many games as I wanted to, but I feel that I improved,” she said.

“It was fun because I played against some of the best players in Ontario and in Canada. It was a good challenge, and I was seen by a lot more coaches.”

In the summer of 2019, Bouchard was a member of Team Ontario Under-17 club, playing tournaments in Montreal, Chicago, and Washington, as well as the national championships in Victoria, B.C.

“It was different because I had never played basketball full-on during the summer. But I enjoyed it a lot. I learned a lot, playing with different players, and being on the same team as some of the best players in Ontario. I learned a lot and made new friends.”

“At nationals, I was injured, so it was kind of disappointing, but it was a really fun experience. I at least got to be there, and be around the girls.”

For Bouchard, and just about every high school senior across the country, this year’s university recruitment process was a lot different. Bouchard reached out to Acadia University last August, after hearing good things about the school from a friend who had visited the campus.

They responded quickly, Bouchard sent them some game footage, and they had a few Zoom meetings to discuss the possibility of her joining the team.

“After the first Zoom call, I kind of knew that’s where I wanted to go, even though I hadn’t made my decision yet.”

Bouchard primarily plays point guard, but does have some experience at shooting guard as well. She feels one of her biggest strengths is her leadership and motivational skills.

Acadia Axewomen head coach Len Harvey is thrilled with the addition of Bouchard to his squad.

“Amelie is a skilled guard with a great motor. She is a very solid shooter and scorer, but what impressed me early on was her speed with the ball,” he said.

“Her skill-set is really going to fit with our style of play, and she’s a gym rat so I’m excited to see what she is able to do while she’s here at Acadia.”

Bouchard plans on studying kinesiology, after being impressed by the program during the recruitment process, particularly the focus on hands-on learning, which she said is a good fit for her.

“I kind of want to be a physio, so I’ve been thinking about this pretty much all of my high school years.”

Located in the small town Wolfville, N.S., attending Acadia will be a whole new experience for Bouchard, not having been to the east coast, something she is looking forward to.

Bouchard has been in contact with team officials, and Zoom meetings will become more regular in the coming months as she prepares for the fall season. However, with recent COVID-19 case numbers rising in Nova Scotia, she isn’t certain exactly when she’ll be joining her new teammates.

“I was planning on going out in early August, but it's kind of up in the air right now.”

She credits many coaches for helping her get to where she is today including Jey-son Edwards of Father James Redmond, Guy Chenier of Thériault, as well as her coaches from her Selects years, such as Jamie Lamothe, Ted Weltz, Michelle Simard, and her mother Josee Belanger.

“That’s where it started. I appreciate them a lot. That’s where I learned and learned to love the game.”

Belanger, and Amelie’s father Rock, are beaming with pride at their daughter’s accomplishments.

“We are beyond proud of Amélie and thankful for all the coaches, trainers, and teachers who have played a role in her journey, and who have supported her to meet her goals on the basketball court and in the classroom,” said Belanger. “We look forward to seeing her play at the next level and know that she will continue to excel at Acadia University under the guidance of coach Harvey and his team.”

Andrew Autio is the Local Journalism Initiative reporter for The Daily Press. LJI is a federally-funded program.