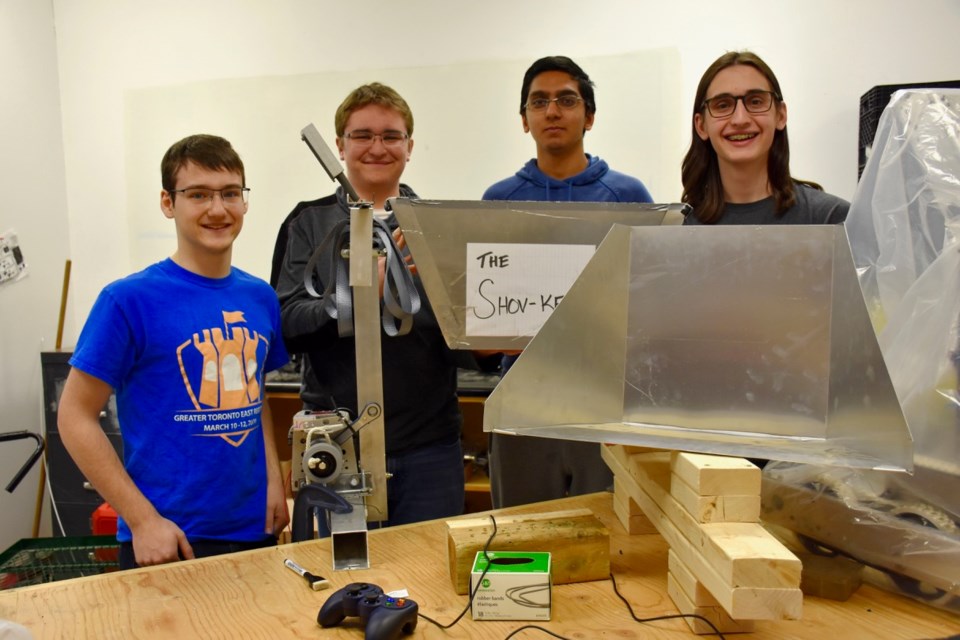 Talking robotics, Emerson Arnold and Samuel Street are in their element.

While there’s a healthy amount of bantering back and forth, they’re passionate about being part of a team that is dreaming up and creating a working robot.

Arnold and Street are two members of the Timmins High and Vocational School Team 4704 Northern Lights Robotics heading to the FIRST Robotics competition in Waterloo March 22-24.

It’s the second time the team is putting their robot to the test this year, having already earned their best seeding ever at an event in Oshawa recently.

Arnold, who in his fifth year is the veteran of the team, feels pretty good heading into the competition.

“We have a climbing mechanism that’s ready to be installed and tested, but other than that this is our best robot ever,” he said.

The requirements for the FIRST Robotics competitions are different each year.

“We’re given a task in January and we’re given six-and-a-half weeks to design and build a robot that can complete said task, and it’s a whole lot of fun,” explained Street.

This year, the robots are basically moving crates and stacking them on a scoring platform.

There was a lot of debate that went into designing the robot. Arnold and Street are still lightheartedly bickering about it when they talk about the work that went into it.

“We went through easily a dozen designs over the course of the six weeks, some were more fleshed out than others,” Arnold said, explaining they decided on something simple.

Having one competition in the books, he said that one thing they decided could improve their entry is a climbing mechanism.

“The thing about a climbing mechanism is usually there’s enough for three robots to hang at once, this year there’s enough room for one, maybe two if they’re very small robots. It’s very compact and it’s very tricky to get it, so we just kind of realized you’re not going to get all three up regardless so we focused on one of the power ups that you can get that gives you a free climb,” explained Arnold.

“One thing is that we recognize our inability to do certain things and we focus on what we can do and do that very, very well. It’s a conscious design choice to not try to do everything.”

Arnold and Street are passionate about talking all-things robotics.

Street’s interest was piqued when he was attending Ross Beattie and the TH robotics team visited.

“It’s this giant robot that moves around and if you watch the videos, it completes tasks, they’re all throwing stuff ramming each other, it’s just awesome,” he said.

Being on the team and attending the competitions is as exciting as anticipated.

“The competition when you get there, it’s so much fun. It’s just loud music playing, you can’t hear yourself think,” Street said.

For both of them, there’s nothing like seeing their ideas come to fruition.

“To be able to create something from your thoughts is, I can’t really put it into words, it’s just amazing,” said Arnold.

Watching the video sent this year describing the requirements for the competitions, the students break it down, noting how simple the concepts are.

“It looks complicated but it’s not, it’s pretty easy once you realize what you’re doing,” said Street.

While there’s a lot of things happening on the course Arnold said “if you can get through it, it’s very simple once you understand it.”

TH robotics team competes on the road (4 photos)
Mar 6, 2018 8:26 PM
Comments
We welcome your feedback and encourage you to share your thoughts on this story. We ask that you be respectful of others and their points of view, refrain from personal attacks and stay on topic. To learn about our commenting policies and how we moderate, please read our Community Guidelines.