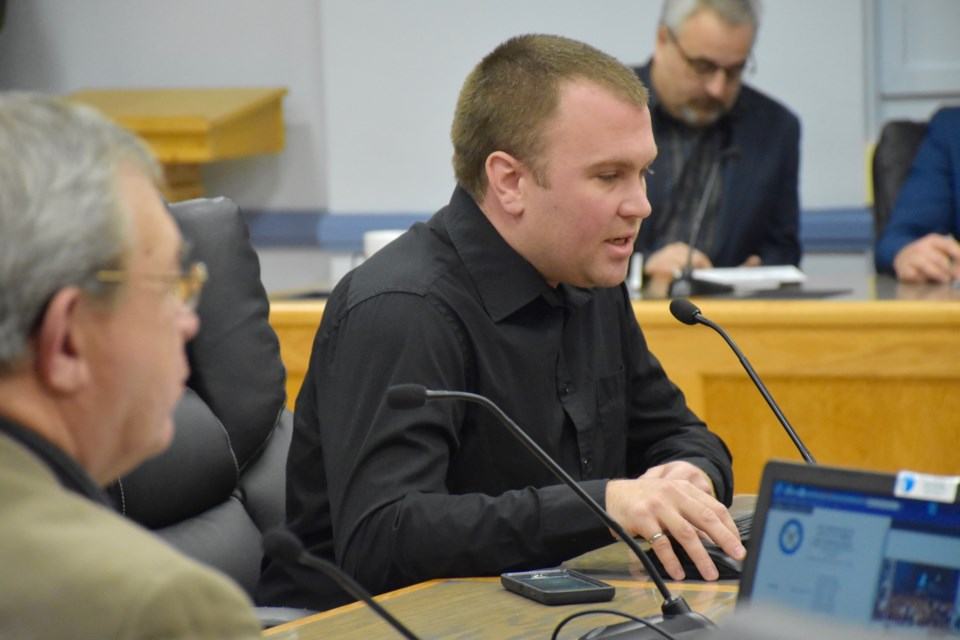 Former mayor Steve Black pitches a third Stars and Thunder festival to council, which he says would be 'drastically different' than past events. Maija Hoggett/TimminsToday

Former mayor Steve Black made a return to the council table to pitch a third edition of Stars and Thunder, which he says would be put on "drastically different" than the past events.

While a potential 2019 music festival wouldn’t be financed by the city, council is being asked to support a $300,000 sponsorship, along with providing other items such as tents and recycling bins.

Black said whether or not Hollinger Park, which is undergoing remediation work, would be ready is the first question to be answered, however.

“It needs to be a guaranteed ready. We can’t plan a multi-million-dollar event, sell tickets to people around Canada and then have June come along and the city say ‘ya, we’ve got some bad weather, the park’s not ready, you have to cancel that event’,” he said.

The first Stars and Thunder music festival was held in 2017 and coincided with Canada's 150th celebrations. The eight-day event capped off with a Keith Urban concert. That year, the festival had a $600,000 deficit.

In its second year, it was also an eight-day festival with Canadian rocker Bryan Adams headlining the final show. There was a $1.6-million shortfall.

Those festivals were organized by the City of Timmins.

Moving forward, Ron Sakamoto’s Gold and Gold Productions would take it on. Sakamoto worked with the city on the first two events.

The proposal presented to council is for a four-day festival, instead of eight days.

Organizers have a number of requests for the city.

• to supply and set up tents, tables and chairs

• to supply garbage and recycling bins

• to hold off on the home run fence until after the festival, if possible

Black said they would also need to secure an additional $400-500,000 from other avenues, as well.

“It isn’t a go or no-go if the city has $300,000, there’s a large financial commitment that has to be obtained beyond that to push the festival forward,” he said.

The sponsorship cash is to help the festival become self-sustaining and the plan presented says the ask of the city would be reduced every year until there is no financial contribution in 2022.

While Coun. Joe Campbell said he supports Stars and Thunder, he agrees it has to be self-sustaining.

“So why not look at your ticket sales, your projected ticket sales, and if everybody that buys a ticket, including me, has to pay an extra $30 you self-sustain this thing right from day one and the taxpayers are not on the hook for a single nickel,” Campbell said.

As for where the $300,000 could come from, Black suggested if the city implements a municipal accommodation tax, it could come from that projected new revenue stream.

The previous council talked about the tax at one of its last meetings and gave staff the green light to put together a municipal accommodation tax program.

With a four-per-cent tax, it is estimated the program could generate about $1 million per year. Information on how the program would work was not been brought back to the new council yet.

According to Coun. Noella Rinaldo, the ‘beds and heads’ tax has been a hard sell to hotels.

“This is the exact thing that they would have wanted because this is going to affect the hotels, they are going to benefit from it. This is where a heads and beds tax should go,” she said.

She believes the festival is something the city needs to invest in.

Mayor George Pirie said it’s “very presumptive” for members to assume the debate over a potential new tax would be had in relation to one event.

“In my campaign, I said there has to be consultation with the industry and that’s how you build consensus, you talk to the people affected,” he said.

He doesn’t think the city needs “to anywhere in this process talk about mortgaging the MAT tax in relation to one event.”

In the discussion, the city’s support for Rock on the River was also brought up.

The growing two-day music festival started in 2016 and is organized by the non-profit Timmins Festivals and Events Committee (TFEC). The group is currently working on its fourth event slated for July 26 and 27 at Participark.

While Rinaldo asked for a report on what the city contributes to Rock on the River, Pirie clarified that the city’s support is about $35,000 of in-kind donations.

No decision has been made on a potential 2019 Stars and Thunder yet.

Staff is expected to have a report on the state of Hollinger Park at the Jan. 22 meeting.

Black noted the three critical steps for the promoter to feel comfortable moving forward are to secure a city sponsorship, corporate and business sponsorships, and to confirm headliners and acts he’s comfortable would get to a break-even point.

If council is supportive of the event, he was originally looking for a resolution committing to the requests Jan. 22, he said they’d reluctantly extend that to February.

Year in Review: Remember these acts at Stars and Thunder? (13 photos)
Dec 29, 2018 9:00 AM
Comments
We welcome your feedback and encourage you to share your thoughts. We ask that you be respectful of others and their points of view, refrain from personal attacks and stay on topic. To learn about our commenting policies and how we moderate, please read our Community Guidelines.