It's giving a forum to people of colour, bystanders and allies to share stories, says multicultural centre
Jun 30, 2020 2:00 PM By: Dariya Baiguzhiyeva 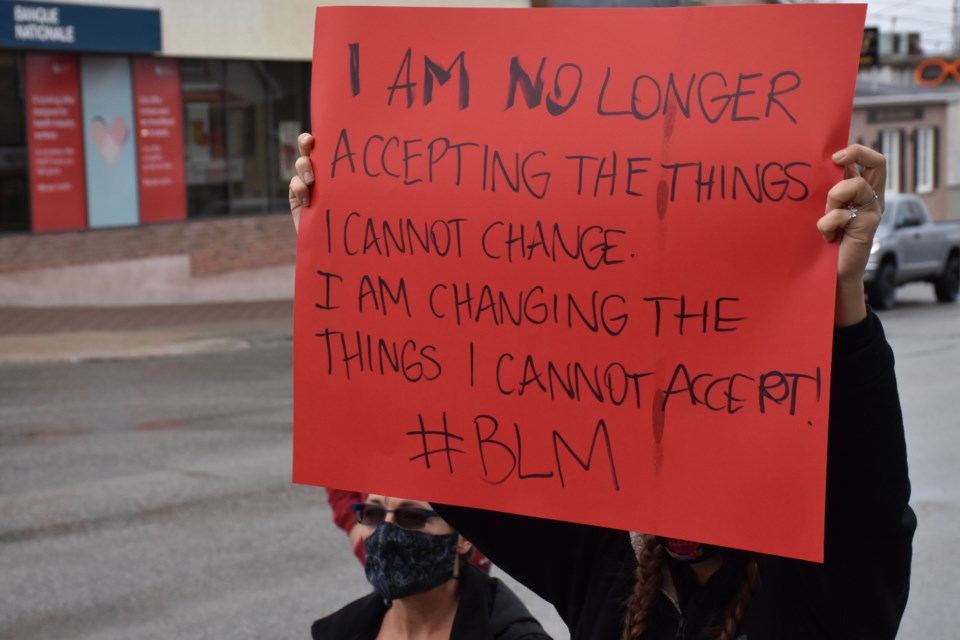 The Timmins is Listening Facebook page is project that came in response to recent anti-racism rallies. Pictured is one of the homemade signs at a Timmins protest earlier this month. Maija Hoggett/TimminsToday

A new project introduced by the Timmins and District Multicultural Centre aims to make the community more inclusive and welcoming.

The idea came as a response to the Black Lives Matter movement and events that occurred across the border as well as in Timmins, said the centre’s local immigration partnership co-ordinator Mike Scott.

“We wanted to give a public forum to people of colour, bystanders and allies. Basically, anybody who has a story to tell,” he said. “They could be stories of racism and discrimination in our community but they can also be stories about the absence of those things.”

Project leaders hope to have a mix of positive and negative submissions.

“The hope is it holds up a true-to-life mirror into the community and gives us some indication of what the next steps forward are,” Scott said.

Stories can be submitted in any language and should not contain any personal attacks on other people, businesses or organizations.

“The idea for it to be as accessible and inclusive as possible. And we really want to invite people to come forward, to share their stories anonymously,” Scott said. “We understand regardless it being anonymous or not, it takes a tremendous amount of courage to relieve these stories and share them publicly.”

Submissions can be sent to info@timminsmulticultural.ca.

Two weeks of licence-free fishing starts today
Jul 4, 2020 7:38 AM
Comments
We welcome your feedback and encourage you to share your thoughts. We ask that you be respectful of others and their points of view, refrain from personal attacks and stay on topic. To learn about our commenting policies and how we moderate, please read our Community Guidelines.