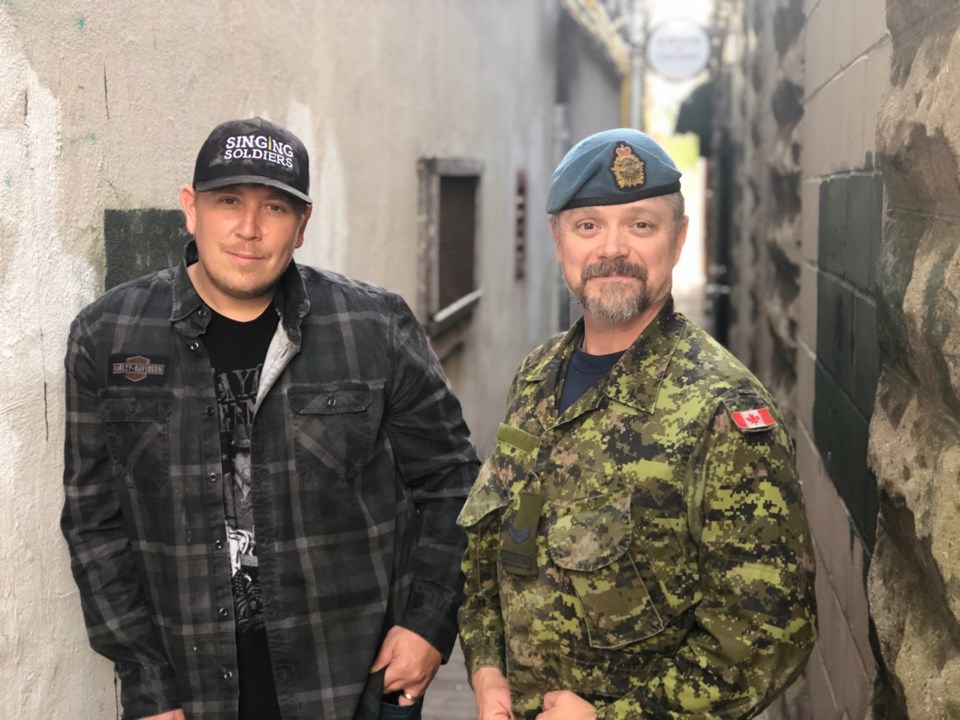 Graham Trude and Chris Earl created the country music band Singing Soldiers to share their experiences with PTSD and the music that helped them heal. Erika Engel/CollingwoodToday

COLLINGWOOD - Years of music and military service have come together for some life-changing moments for Graham Trude and Chris Earl, and the moments keep coming as they tour Ontario this fall as the Singing Soldiers.

Trude and Earl started a five-piece country music band together in January 2019. Both had been playing music for decades, but this time it was different.

“We wanted to do something that was more of a message, a guide for hope and healing,” said Trude.

Earl, who lives in Tiny Township, is currently serving in Canada’s air force in a trade as an aircraft structure technician, and Trude is a police officer in Orangeville and lives in Collingwood.

Trude was also in the army in the armoured division and served on one tour in Afghanistan in 2009.

Since then, Trude has been diagnosed with complex Post-Traumatic Stress Disorder (PTSD).

“I had an extremely high anxiety disorder,” said Trude. “I thought I was going crazy.”

Trude said he felt relief after receiving a diagnosis of PTSD from the Operation Stress Injury Clinic.

He said he could finally work on healing, and one of the things that helped on that journey the most was playing and writing songs on his guitar.

“That’s one of the reasons we started Singing Soldiers,” said Trude. “Everything we do is about trauma healing through music therapy … I was in a dark place, I truly believe what got me out of that dark place is music.”

“As a family member, you don’t know how to speak to the individual because you see things they don’t,” said Earl. “Looking in, it appears as an addiction. In my experience, PTSD lends itself to addiction.”

He also used music as an outlet and for the sake of his mental health.

“Writing a song becomes a mechanism of expression to get thoughts on paper,” said Earl.

One of Trude’s songs Seen What I Seen goes through his struggles with PTSD, and it’s inspired many other military personnel, first responders, and those suffering from PTSD to reach out to Singing Soldiers.

“I see Graham (Trude) as a hero for all he has accomplished,” said Earl. “He can stand on a stage and sing these songs that helped him heal and tell these folks in the audience there’s hope for them too. This is where he’s come in his journey.”

As the Singing Soldiers, Trude and Earl said they are bringing vulnerability and shared experience to the stage, and the result has been “non-fiction” music that makes a genuine connection to audiences, some of whom have reached out to say what the music of Singing Soldiers has meant to them.

“What we’re doing here, there’s nothing like it, “ said Trude. “It’s all about the lyrics. It’s music for the masses.”

Earl said he’s played music for 30 years, and this feels like something new.

“I almost feel like I’ve started over, it’s changed my life,” he said. “These are songs with meaning.”

One of the Singing Soldiers’ latest releases is a song called Frontline Soldiers, which is about both soldiers and first responders standing together.

“I wanted first responders to know we are in huge support of them, understand what they’re going through, and we’re all in it together … to let them know they’re not alone,” said Trude, adding he recalls feeling alone while he struggled with undiagnosed PTSD. “I would say it’s something I felt, but I no longer feel that way.”

As a band, Trude and Earl have a goal of one day playing at the Invictus Games, and they’ll be booking a Canadian tour in April and May 2020, then maybe a Juno one day. But most of all, they want to do what they do for their message of healing.

“We want to stay grounded, but do as much in the world as we can,” said Earl. “There’s still a massive stigma [around PTSD]. I work with guys every day who don’t want to talk about it. It’s gotta change.”

In addition to music therapy, the Singing Soldiers have started a charity called A Song Is Forever (ASIF), which provides acoustic guitars and trauma healing accessories for people dealing with all forms of operational stress injuries and mental health-related matters.

This fall, the Singing Soldiers are touring Ontario, with a stop in South Porcupine on Sept. 28 atthe Royal Canadian Legion. For tickets to the show, call 705-235-3010.

Northern mayors 'plead for help' from province in battling mental health and addiction issues
Oct 22, 2020 4:23 PM
Comments
We welcome your feedback and encourage you to share your thoughts. We ask that you be respectful of others and their points of view, refrain from personal attacks and stay on topic. To learn about our commenting policies and how we moderate, please read our Community Guidelines.