The verdict means jurors believed beyond a reasonable doubt that Schlatter sexually assaulted Richey as part of the same series of events as her murder
0
Mar 25, 2020 3:30 PM By: Canadian Press 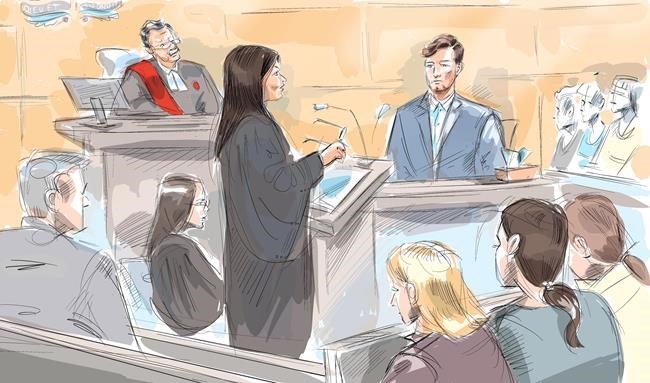 TORONTO — A Toronto man's "appetite for violent sex" and his desire to experience it led him to strangle a young woman hours after they met, an Ontario judge said in sentencing him to life in prison.

As he handed down the ruling Wednesday, Ontario Superior Court Justice Michael Dambrot alluded to evidence of Kalen Schlatter's sexual interest in choking that was kept from the jurors who determined the 23-year-old's fate.

"The jury found you guilty of first-degree murder without knowing what I know about you, but I know it, and I will not be blind to it in these reasons," Dambrot told Schlatter.

"It is true that you are young, but your sexual appetite led you literally to take an innocent young woman by the hand down a path to her death," he said.

"To satisfy your lust, you took her life... you stole a large piece of the fabric of the very being of the members of her family and friends and, I could not fail to observe, you shed no tear for their losses."

Schlatter was convicted Monday of first-degree murder in the killing of 22-year-old Tess Richey, an aspiring flight attendant whose disappearance in November 2017 set off an intense search.

The verdict means jurors believed beyond a reasonable doubt that Schlatter sexually assaulted Richey as part of the same series of events as her murder.

The conviction carries an automatic life sentence with no chance of parole for 25 years, which was officially imposed Wednesday after an emotional hearing that saw Richey's family and friends voice their grief.

In a series of tearful statements, Richey's mother, her four sisters and two brothers-in-law mourned the young woman they described as fierce, generous and kind. Friends also described the devastating impact of Richey's death.

Anyone who met Richey could see she was "incredibly sweet and very special," her mother, Christine Hermeston, said as sobs echoed in the courtroom.

"I will never understand why anyone would hurt another person the way that Kalen Schlatter hurt my daughter," she said, turning to look directly at Schlatter as he sat in the prisoner's box.

Jenna Richey said her sister's death has left her a different person. "My relationships have suffered and I find myself isolated, fearful and constantly plagued with anxiety and worry," she said.

Tess Richey's eldest sister Varina Richey, 39, recalled flying back to Canada from England, where she had been living for years, after her sister's body was found at the bottom of an outdoor stairwell in Toronto's gay village.

Since then, Varina Richey said, she has been haunted by nightmares and suicidal thoughts.

"I can't think straight, I cry at the drop of a hat, and I spend countless hours agonizing over what went on in that stairwell. Did she cry for us?" she said.

Hermeston and her son-in-law Greg Lefebvre said outside court they were stunned by Schlatter's stoic demeanour even as they confronted him with the traumatic legacy of his actions.

Hermeston and Varina Richey also expressed their gratitude that the trial was allowed to continue and conclude amid increasing restrictions over the novel coronavirus.

During trial, court heard Schlatter and Tess Richey met after leaving the same club in the early hours of Nov. 25, 2017.

The two of them, along with Richey's friend Ryley Simard, were captured on security footage wandering through the neighbourhood, stopping at one point to buy hotdogs and at another to talk with two people who lived in a nearby home.

Another video showed Schlatter and Richey walking down an alley around 4:15 a.m., after Simard had left. About 45 minutes later, Schlatter emerged alone. No one else was seen entering or leaving the alley, which was between two buildings and fenced off at the back.

Richey's body was found days later by her mother and a family friend, at the bottom of a stairwell in that alley. Court heard she had been strangled, possibly with fabric or a forearm.

Schlatter was arrested and charged in February 2018.

People in the community were scared to go out, and the impact of that violence is still felt today, said Becky McFarlane, senior director with The 519.

McFarlane highlighted evidence that Schlatter told two undercover officers he liked going to gay bars because it was easier to pick up women there, saying his predatory behaviour violated what were meant to be safe spaces.

"He stole from our community too....one that he was a part of as a self-identified bisexual man and as someone who spent weekends dancing and drinking in Church Street bars," she said.

"Our community built those spaces and Kalen Schlatter ... betrayed our community in the most unimaginable, unthinkable way."

This report by The Canadian Press was first published March 25, 2020.