When the agreement goes into effect this fall, 32 First Nations will be enabled to receive a percentage of revenue
Feb 25, 2019 11:23 AM By: Ian Ross 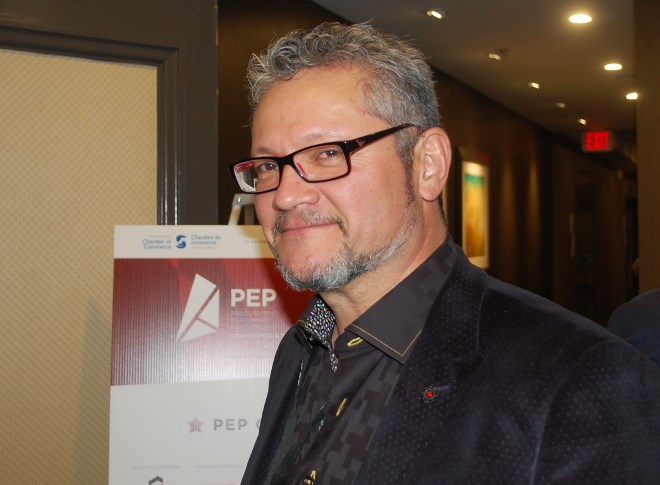 Jason Batise, executive director of the Wabun Tribal Council, was instrumental in negotiating a new resource revenue sharing model that will go into effect this fall. Under the agreement, 32 First Nations will share revenue from mining operations in the province. (Ian Ross photo)

Wabun Tribal Council executive director Jason Batise recalls a conversation with a provincial negotiator on a resource revenue sharing model that the former Wynne government planned to carry into the 2018 provincial election.

During a break, the senior bureaucrat took him aside and confided that these talks represented a “crowning achievement” in his professional career.

“I’ve been in the public service for 25 years and this is the best thing I’ve ever done,” recalled Batise.

When it goes into effect this fall, the series of agreements between the province and 32 First Nations, including six from Wabun, enables them to receive 40 per cent of the annual mining tax and royalties from existing mines in areas covered by the agreements, 45 per cent from future mines, and 45 per cent of forestry stumpage.

But the deals also represented a signature moment for the chiefs and staff of Wabun who, since the mid-2000s, have accumulated an extensive base of knowledge and understanding of what benefits the mining industry can bring to break the cycle of poverty and dependence in their communities.

The member communities of the Timmins-based Wabun Tribal Council have traditional land that takes in a wide swath of northeastern Ontario, including the prolific gold and base metal mining and exploration camps in Timmins and Kirkland Lake.

When they made their pitch to the province to talk about resource revenue sharing, Batise stressed to Queen’s Park that they had a willing partner in the progress-minded Wabun communities.

“We’ve done this before, we have a way to negotiate and understand fair deals, we know what the resource development industry is and isn’t, so come talk to us if you want to set an example for the rest of the province.”

Batise handles the negotiations for mining and hydroelectric agreements on behalf of the six Anishnabek communities that make up the tribal council: Beaverhouse, Brunswick House, Chapleau Ojibwe, Flying Post, Matachewan, and Mattagami.

Wabun currently boasts 10 impact benefit agreements reached with operating mines and 90 agreements of varying stages at the exploration stage with dozens of limited partnership companies at the service and supply level.

And there are plenty more in the pipeline.

The Wabun model has largely been regarded as a best practice to make meaningful engagement toward striking positive First Nation-industry partnerships.

Their impressive track record of results-driven dialogue and agreements was enough to entice then-Premier Kathleen Wynne to make the trip north to meet with the Wabun chiefs in Matachewan in 2017.

But long before that, it’s taken a string of First Nation landmark court victories across Canada on the government’s duty to consult and accommodate on resource projects that provided the leverage for First Nation groups like Wabun to earn a seat at the negotiating table.

Before 2005, under the free-entry system in Ontario, there was no obligation for prospectors or industry to engage with Indigenous people.

“With a licence to stake, you went out and did whatever the heck you wanted with no regard to even a conversation with First Nations,” said Batise.

“It’s clear now that industry and government can’t ignore the First Nations’ right to the land.”

With knowledgeable staff at the community and tribal council, what Wabun offers is a structured and consistent process for communities and companies to forge long-lasting business relationships through a series of graduated template agreements.

At the grassroots stage of exploration, a letter of engagement is signed; it’s an acknowledgement by a prospector or junior mining company that they are on the traditional territory of First Nation.

It carries a commitment that if work progresses to the drilling stage, an exploration amendment is in order – a memorandum of understanding (MOU) – which outlines agreed-upon conditions of how drilling and access will occur.

The MOUs don’t bring much monetary value to the community, but they establish the framework for a potential impact benefit agreement (IBA) should a mining project advance to the development stage.

IBAs outline provisions for environmental and health protections, but also provide for employment and training, and business and contracting opportunities.

These are legal documents backed with dispute resolution mechanisms and binding arbitration.

The details of each individual agreement are kept confidential, but at its heart the step-by-step process is designed to engender mutual respect, transparency, certainty for both parties and a willingness to share in the area’s mineral wealth.

Companies are asked to fund the IBA negotiating process, which in some cases can last years.

Reaching an IBA with Goldcorp in Timmins took five to six years, Batise said; the agreement with the company’s Borden mine project took three years.

Aligning with industry has brought visible and tangible benefits to the Wabun communities, said Batise, with improved water quality, better housing, and new vehicles in driveways.

He calls his community of Matachewan First Nation, situated close to Alamos Gold’s Young Davidson Mine, a “very wealthy, happy place” with 100 per cent employment.

“Forestry’s great. It’s renewable – I get it – but it doesn’t generate the kind of excitement and the economy that mining does.”

Being a partner in natural resources wealth generation allows their communities to invest back into regional economy in buying goods and services.

Lately, Matachewan has joined Wahgoshig in being an investor in 48North, an expanding Kirkland Lake commercial cannabis grower.

“What you’re seeing from our communities is that we’re not just holding the money tightly to our chests, we’re looking to finance other operations. We’re willing to risk our capital in supporting businesses in Northern Ontario.”

Batise said they’ve shared their success story in Aboriginal forums across Canada and he is only too willing to work with Indigenous groups in advising them on how to strike the best deal possible.

But he also encourages First Nation leaders to be upfront and forthright on whether to open up their territories to exploration and potential development.

“Some of the leadership will say, ‘We’re open for business, but not in my backyard.’ How do you make those statements work together?

“There’s only so much the band office can provide for the community. You’ve got to have an industry. Communities have got to find a way to attach themselves to other businesses and development in a significant way, or they’re going to suffer more. I don’t know how they can get out of that cycle if they don’t look outward in their territories and start to develop that.”