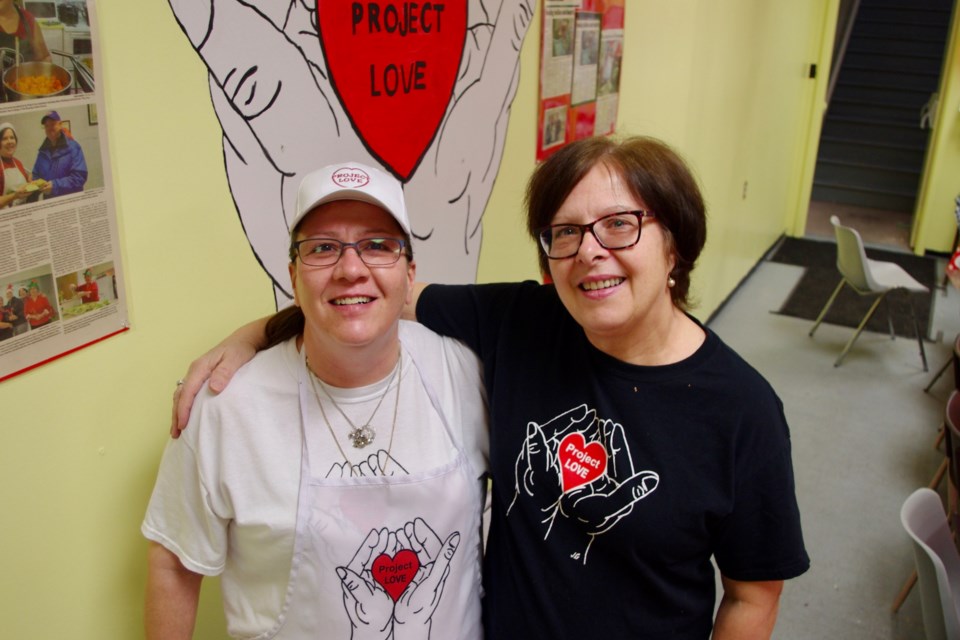 A year ago, a seed of love was planted in the community.

Now, Mel Chartier and Nicole Gillard are watching it blossom.

The two are the founders of Project Love, which helps people in Timmins who are hungry or homeless. Their aim is to complement the other programs that already exist in town.

Walking into the church the day after the one-year anniversary, the sound system is turned up and Joy to the World is, fittingly, playing, but it’s not loud enough to dull the sound of excitement downstairs where volunteers are preparing another meal. It’s Monday, so the menu is a hearty homemade soup and sandwiches. Sundays are when the Project Love family gets together for a big meal.

The outreach officially started Nov. 12, 2016, when Project Love served about 25 people breakfast at the Salvation Army downtown Timmins. It’s been growing ever since.

A week before Christmas 2016, Gillard said they served their first Sunday meal from the basement of the Mountjoy United Church. In January, they started a lunch program offering students lunches twice a week.

On their one-year anniversary, Project Love served 206 meals and handed out 35 lunches to school children.

“It’s beyond my wildest dreams. It’s not possible without the beautiful people that volunteer for us,” Chartier said.

“You’ve got the people with the heart of gold here,” she added, gesturing to the busy room of volunteers.

Chartier became an activist about four years ago when she found herself homeless and realized how hard it is to access help in town.

A retired school teacher, giving back is second nature for Gillard.

In the classroom, she remembers bringing in a loaf of bread and peanut butter so that students could have a meal.

When her fulltime career ended, she started talking about going to Africa and volunteering to teach there.

“Someone said why don’t you start here,” she recalled.

After working together as scrutineers at an election, Chartier said she approached Gillard and Project Love took shape.

From that first breakfast, the numbers grew and grew.

Chartier said people would get a hot meal to start their Sunday and were able to access a donation room offering clothes, dishes, and more.

Then, Chartier said they were approached by the Mountjoy United Church.

Gillard remembers crying the first time they saw the kitchen.

For a while after they moved into the church, breakfasts were still be served at the Salvation Army.

The crew would put on early meal, clean up and move over to the church to get dinner ready. Breakfast is no longer served, however the donation room at the Salvation Army is still open.

As word got out last year, Gillard was contacted by a former student.

When he was in Grade 1, Gillard had given him meals at school. Because she had fed him three decades before, he helped in those early days and still answers their call when needed.

Not every day is easy at Project Love though.

Gillard would be happier if the bank account always had a cushion.

Putting on the meals costs about $500 per week. The outreach is sponsored by the Mountjoy United Church congregation, which covers the overhead costs. Gillard said all the donations they receive are used for food. Schools, businesses and people in the community have stepped up to make sure there are always meals on the table.

At Project Love, Gillard said everybody is welcome.

The only thing they ask is for people to leave the negativity at the door.

“We’re trying to aim for unconditional love,” she said.

With the welcoming environment, they’ve created a family.

Now they are calling out to each other as they walk through the door, catching up on their lives and keeping an eye out for one another.

If someone doesn’t show up for a couple of weeks, the community will check in to make sure they’re OK.

And if a student doesn’t show up for their lunch, Chartier has their back.

“I deliver (lunch) straight to their house because I know the kids need these lunches,” Chartier said.

To volunteer or donate to the group, email projectlovetimmins@gmail.com or visit their Facebook page.

Work starts on warming centre in Timmins
Oct 31, 2017 11:04 AM
Comments
We welcome your feedback and encourage you to share your thoughts on this story. We ask that you be respectful of others and their points of view, refrain from personal attacks and stay on topic. To learn about our commenting policies and how we moderate, please read our Community Guidelines.