Police tell us about their ongoing standoff investigation

Last Wednesday was a day many Timmins residents will never forget. The city’s west end was essentially frozen under suspicion of an armed intruder inside Canadian Tire on Riverside Drive. The incident quickly became a national news story.
Jun 24, 2015 4:16 PM By: Andrew Autio, freelance 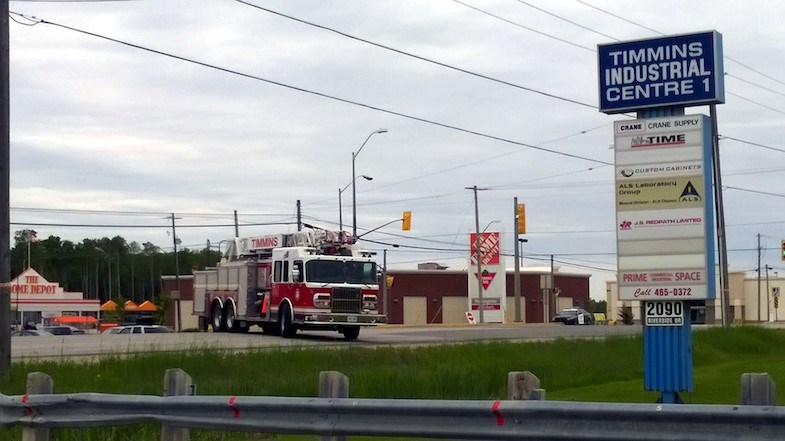 Last Wednesday was a day many Timmins residents will never forget. The city’s west end was essentially frozen under suspicion of an armed intruder inside Canadian Tire on Riverside Drive.

There were suspicions that the incident could have been related to the wanted killers in the Sina Parsi murder case in Toronto, who were allegedly seen in the Timmins area. They were considered to be armed and dangerous.

On Monday, the two wanted individuals, Clyde Marshall and Sabrina Chouart were apprehended at a Wal-Mart in Niagara Falls.

There has been no confirmed correlation between the two incidents.

TimminsToday spoke with Timmins Police Service spokesperson Kate Cantin to get an update on their investigation.

The TPS has asked the public to report any information they have pertaining to this case.

“I know there have been some tips received, I’m not sure of the exact amount but yes, there are leads investigators are following”

The TPS acknowledged that the target of the suspect was the firearms cabinet.

On Wednesday, Cantin confirmed there was indeed theft of merchandise at Canadian Tire.

“Yes there were items taken, but at this time that information is still being withheld as its part of the investigation. We’re not releasing specifics regarding the quantity or the type of items taken at this point” she said.

“What we released to the public was essentially the video that police were viewing to help them with the investigation on Wednesday as the event was unfolding,” said Cantin.

Many residents of Timmins questioned the additional reinforcements which rushed in from several other communities in Ontario.

“With every incident that’s a major incident like this, police do have debriefings and they do get together and talk about what happened. What went right? What maybe could be done better or differently next time? There is definitely debriefings with situations like this,” said Cantin.

The investigation was temporarily handed over to the OPP by the Timmins Police Service, before it was returned to the TPS later in the day.

Jones could not comment on the number of OPP officers that were involved in the incident.

“It’s not appropriate for me to discuss how we do our operations so I’m not able to give an exact number,” she said.

Jones confirmed there were members of the South Porcupine detachment of the OPP involved in the operation.

Two OPP helicopters were flown in to the scene as well.

“The units that attended the Timmins area came from Orillia. I don’t know which team were there. We have a number of those teams deployed around the province. Both helicopters were from Orillia and they were both used to transport our members to the scene” said Jones

She was also asked if there had been a precedent event like last Wednesday, in which special OPP officers were called in by the TPS?

“Anytime that a police service requires our assistance, we do respond and we do support and assist them. It has happened a number of times. There’s a process that’s followed in order to have us come in and help. There are notifications, and the two officials from the police services liaise with each other and decide what the appropriate actions or resources are, then the decision is made whether or not to send to send those resources. We often support our municipal police service partners and our First Nations partners as well,” said Jones

The Timmins Police Service continues to ask for the public’s assistance in the pursuit of the suspect and vow to keep the public up to speed.

“When there is new information available we’ll definitely be updating and providing the public with as much info that we can.”

The suspect is still at-large.

Anyone with information can contact the Timmins Police Service Criminal Investigations Section at 705-264-1201.

Previous TimminsToday coverage of this story:

Standoff looks to have been one-sided: police (11 photos)

BEYOND LOCAL: Men are buying potentially risky steroid substitutes to get the 'ideal body'
Sep 30, 2020 8:55 PM
Comments
We welcome your feedback and encourage you to share your thoughts. We ask that you be respectful of others and their points of view, refrain from personal attacks and stay on topic. To learn about our commenting policies and how we moderate, please read our Community Guidelines.