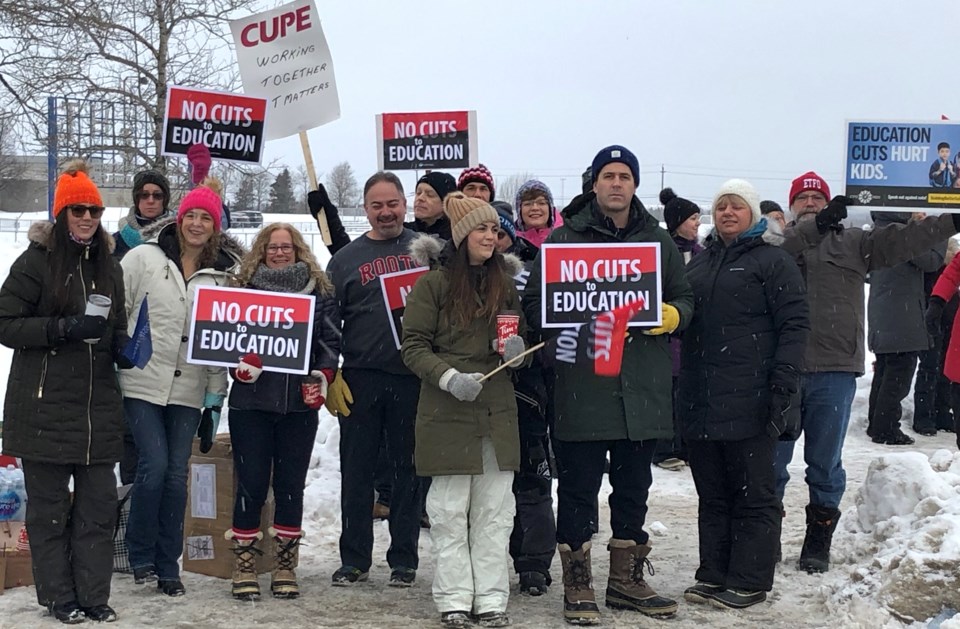 OFSST teachers and supporters display their picket signs on the sidewalk in front of Timmins High & Vocational School. It was part of a one-day, provincewide strike last month. Wayne Snider for TimminsToday

Timmins and area English public and French Catholic high school teachers and education workers are part of a one-day, full withdrawal of services next week.

The Ontario Secondary School Teachers' Federation (OSSTF) and provincial government have yet to reach a new contract agreement, and the union is staging another one-day strike at certain locations Wednesday, Jan. 15.

This time, District School Board Ontario North East (DSB1) is affected, as well as Conseil scolaire de district catholique des Grandes Rivieres, which is the board for Ecole secondaire catholique Theriault in Timmins. OSSTF members at Moose Factory Island District Area School Board and James Bay Lowlands Secondary School Board are also part of the strike action.

DSB1 elementary and high schools will be closed for the strike.

Since Nov. 26, members have not been doing standardized testing or prep, completing Ministry of Education Data Reports, participating in school board professional activities, taking part in unpaid staff meetings outside the regular school day, commenting on report cards, or performing work of another bargaining unit.

Earlier this week, DSB1 announced it would not be participating in EQAO Grade 9 math assessments slated to start next week after the Ministry of Education announced local boards would decided if the provincial testing is offered. The Northeastern District Catholic School Board (NCDSB) is still looking at alternatives to administer the test.

For schools not administering the test, students will have to take it during the June 2020 administration period.

Elementary school teachers are escalating their strike action as well.

Starting Monday, Jan. 13, Elementary Teachers' Federation of Ontario (ETFO) members are no longer supervising extra-curricular activities unless scheduled during a regular school day, they are also not participating in field trips.

At NCDSB, the Ontario English Catholic Teachers' Association is now in a legal strike position too.

This week, its members announced it will be taking administrative job action is an agreement isn't reached by Monday, Jan. 13.

Timmins public schools will be closed for one-day teacher strike
Jan 10, 2020 3:09 PM
Comments
We welcome your feedback and encourage you to share your thoughts. We ask that you be respectful of others and their points of view, refrain from personal attacks and stay on topic. To learn about our commenting policies and how we moderate, please read our Community Guidelines.