Most of Hollinger Park will be closed to the public for the first half of the summer after a fiery debate and a 7 to 2 council vote.

"This comes as a result of some of the complaints and concerns that were raised at last year's festival," explained city CAO Dave Landers on Tuesday evening, referring to Stars And Thunder.

Among the complaints received were discarded and/or broken beer, wine, and liquor bottles in the north side of the park near the playground, and public urination. There were also reports of disrespectful behaviour at the cenotaph.

He said a 'pros' and 'cons' list was made about fencing off the entire park.

The extra fencing needed would also be useful for the soil remediation efforts and re-design of the park. On the other hand it would eliminate public access to the popular playground and splash pad areas. There would also be a significant cost for the additional fencing, and there would likely be additional security costs.

The remediation and re-design of the park complicates matters. Landers said work in the playground and splash pad areas could begin as early as May, with hopes of them being ready for use in by mid-July. At that point the fencing would be moved to the other half of the park.

Councillor Noella Rinaldo said it made sense to start the work as soon as possible, as kids are in school until late June anyway. She said the fact the fencing would help with Stars and Thunder was 'an added bonus.'

Councillor Joe Campbell said the city has absolutely no obligation to complete all of the soil remediation in one year, and questioned how it would be paid for.

"I'm not sure why we want to spend millions of dollars, all at once, and close the park during one of the hottest times of the year, late June and July, to our residents. We don't have to do that this year," he said.

Regarding the alleged urination issues, Campbell felt the festival committee was partly to blame.

"Why did we fence off the public washroom so there was no access in the park?"

As far as the booze goes, Campbell said it's illegal to drink in the park at any time of day, any time of the year.

"We have a police force for that."

He was aghast at the thought of fencing out those without tickets from the entire Hollinger Park area during the festival.

"We owe it to our residents to let them enjoy this thing too. They payed for part of it. and for us to say 'no, we're not going to' - I'm not going to vote for it. Definitely not."

Mayor Steve Black said the Ministry of Health has been consistently asking when Timmins will begin the soil remediation efforts, and wasn't happy it has been deferred even this long. They expect it to get done sooner rather than later.

"This is the first time that we've heard of these complaints. We were told everything went off perfectly last year, and now we're hearing about all of these problems."

Dubeau said the issues were likely caused by a tiny fraction of people in the area.

"Yet we're going to punish the vast majority of our citizens? We're going to fence off the whole area, because a couple of people don't obey the laws?" he said, adding that laws should be enforced by city police.

Councillor Walter Wawrzaszek said it's more cost effective to fence off the whole park and get the work done this year. Campbell quickly responded that there is absolutely no mandate that says the city must do all of the soil remediation in 2018. 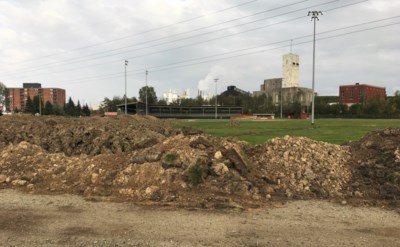 The city is hoping to remediate all of the soil Hollinger Park as soon as possible. Andrew Autio for TimminsToday

"If it wasn't for Stars And Thunder, this wouldn't even be on the agenda tonight. We can vote whatever way we want, but we have more than 12,000 citizens in this community, and I hope they're outraged if council votes to close off that park," said Campbell.

"It's time to stop the partisan voting."

Dubeau said Marks' comparison of arenas, libraries, and museums to Stars And Thunder was 'ridiculous.'

After some bickering between the two, Black interjected and attempted to bring the meeting back on track. It was short lived.

"No other community does this. Arenas, libraries, museums, those are things that a community must have," said Dubeau.

He then asked for 'some respect' at which point Marks got up and left the chambers, although he eventually returned.

The north section of the park is where hundreds of people who didn't have festival tickets watched the firework displays. Black said there will be plenty of other places to watch, including Gillies Lake.

"I don't know of any other festivals across the province that have paid entry, that would allow people to sit within a visible area of the screen as well," he said, noting that he understands the concern in the community.

He said the complaints were brought forward by the city's tourism department and clean-up staff, and that the Timmins Police Service did not receive any calls for public drinking in the park during the festival.

After the meeting, Black told TimminsToday the city already had  begun to put money aside to spruce up the splash pad area since 2015. Work will be done on the water lines and the interlocking brick will be replaced with a safer and much softer surface.

"The goal is to have the newly renovated section of the park open by mid-July, if things go well and weather co-operates. There is a potential risk that if it does not go well it could drag on later in the summer, but the goal is to have it open for that hot part of the summer, and a new, larger area for the kids to play in."

New soil at Hollinger Park will cost $101K
Sep 25, 2017 11:44 PM
Comments
We welcome your feedback and encourage you to share your thoughts. We ask that you be respectful of others and their points of view, refrain from personal attacks and stay on topic. To learn about our commenting policies and how we moderate, please read our Community Guidelines.