Hundreds of flood evacuees on their way to Timmins 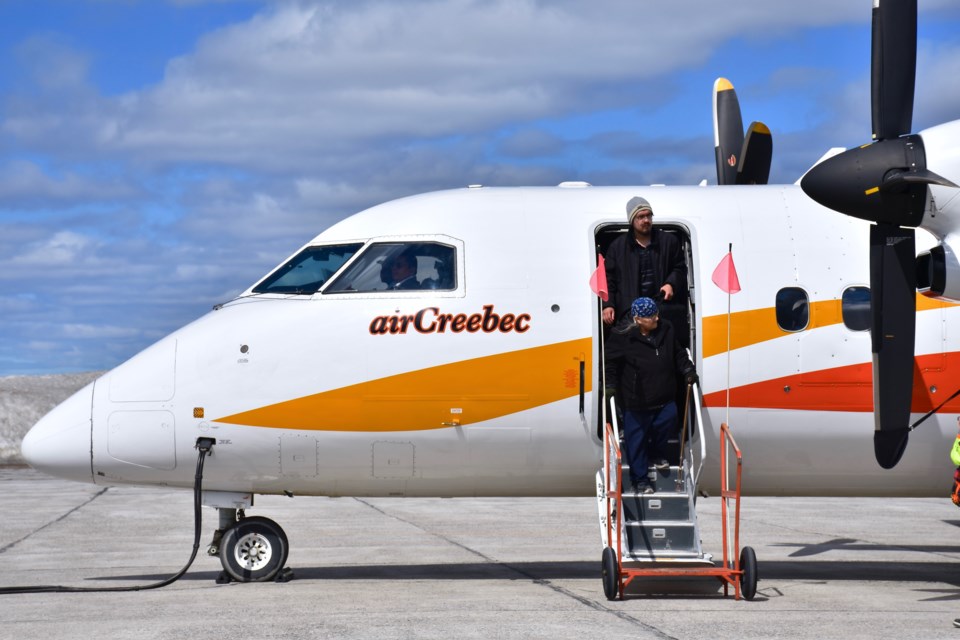 Kashechewan First Nation residents arrive in Timmins. With the spring break up of the Albany River looming, the community on the James Bay coast is being evacuated. Maija Hoggett/TimminsToday

As the spring break up looms on the Albany River, Kashechewan First Nation has declared a state of emergency.

That means hundreds of residents from the community on the James Bay coast are on their way to Timmins, where they'll be housed at the Senator Hotel and Ramada Inn.

In planning for this year's evacuation, the City of Timmins can accommodate up to 700 people.

Timmins-James Bay MP Charlie Angus said 550 people are flying to Timmins today. Evacuees will also be housed in other communities, including Kapuskasing, Thunder Bay and Cornwall.

Those flights are expected to start arriving around 2 p.m., according to the City of Timmins.

Gervais Emergency Consulting Ltd. is taking care of the logistics for the evacuation locally, and will share the daily emergency briefings, and co-ordinate with the key stakeholders.

When people start arriving today, the city said they'll be processed by the Red Cross before being brought to their hotels.

"Council and the residents of the City of Timmins welcome our neighbours from Kashechewan into our community under these dificult circumstances," said Mayor George Pirie in a news release.

"This is a reoccurring challenge for the people of this remote community, and we can only imagine how difficult it would be to experience this displacement year after year. It is our sincere hope that these residents feel comfortable in our community throughout their stay, and we are condifendt the various community partners leading the process will provide the evacuees with excellent service and care during their stay."

As the evacuation gets underway, Angus said he's been talking to Kashechewan Chief Leo Friday every few hours.

“I would say this year the people are very frustrated and people are angry because they were promised with the government that we would finally end this endless cycle of evacuations and flood damage and start to move to the building of new community. Mr. Trudeau broke that promise, so there’s a lot of frustration right now with the people who are flying out this morning,” Angus said.

With a record year for snowfall, Angus said people are being moved out earlier than usual.

“We don’t know just how difficult this flooding season will be, but every few years we have catastrophic flooding in the Kashechewan area and this is could be a really tough year,” he said.

“People are being split up, we don’t know what’s going to happen, how long they’re going to be out, it’s very traumatic and people don’t know if they’re going home to a home that’s safe or a home that’s been completely flooded out and destroyed. It’s not acceptable, people in our region have seen this story again and again and again, and the question is is why are we spending millions every year on flooding, evacuations and repairs to flood damage when we could be putting that money into to building a new and safe community."

The area Angus said the community wants to move to is Site 5, which is on high ground.

Friday has extended an invitation to the Prime Minister and Minister of Indigenous Services Canada to visit the community.

It explains how more than 20 years ago a dyke was built around the community to protect it from flooding.

“This year we’re very concerned about the water levels on the Albany River and certainly that the dyke wall is structurally unsound and...one year that dyke wall’s going to give way,” said Angus.

He said people should call on the government to do the right thing for Kashechewan.

“We need to shame this government into stepping up. There’s not a community in this country that would put up with the trauma of yearly evacuations and yearly flood damage to their neighbourhoods. This is not a sustainable situation, so we need the government at the table because nice words from Justin Trudeau are not going to build a new community. You need the infrastructure, you need a commitment, and over the next five to 10 years we could build a sustainable, good community that the people are very proud of,” he said.

Kashechewan evacuees land in Timmins (7 photos)
Apr 15, 2019 4:27 PM
Comments
We welcome your feedback and encourage you to share your thoughts on this story. We ask that you be respectful of others and their points of view, refrain from personal attacks and stay on topic. To learn about our commenting policies and how we moderate, please read our Community Guidelines.