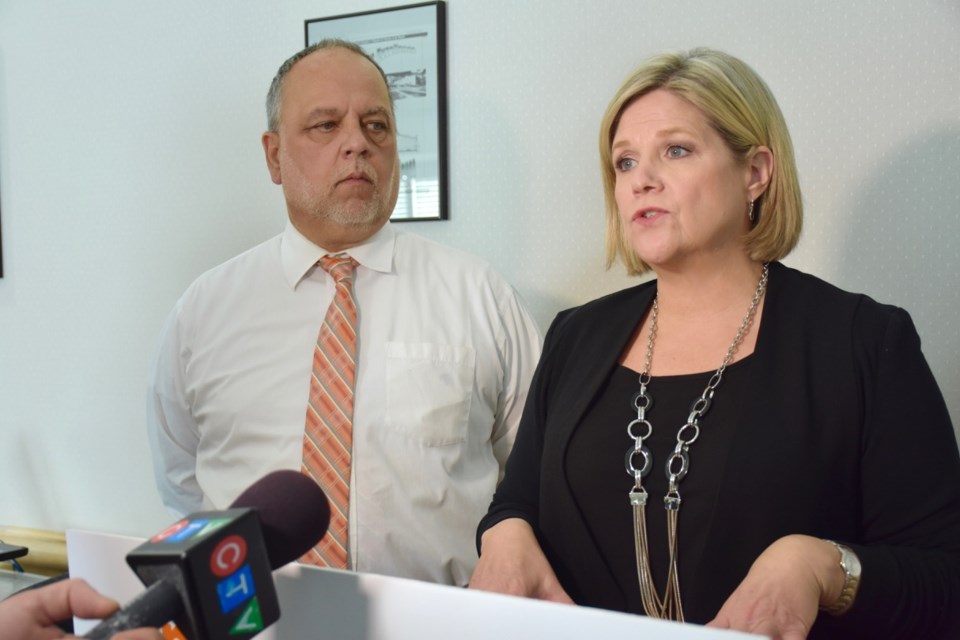 At a stop in Timmins, she talked healthcare at the Timmins and District Hospital, however the conversation touched on anti-racism work, the Ring of Fire, sex education and more.

Here are some highlights of what Horwath had to say about:

Selling off Hydro One

“We’re going to bring Hydro One back into public hands so that we can have a hydro system that’s running with the best interest of our families and of our industries and of our resource sector at the top of its agenda as opposed to making profits or return on investment for private shareholders, which is what Kathleen Wynne decided was the most important thing,” said Horwath.

Repealing the sex education curriculum, which was passed in 2015, and that new Ontario PC leader Doug Ford said he would do.

“The physical education programming that was in our curriculum was from the ‘90s, I mean my son’s 25 and that’s the education that he got back when he was in his elementary years. It definitely needed to be upgraded and I think Mr. Ford has chosen this one little hot-button issue that he thinks is going to make a huge difference for folks, what I think makes a huge difference for folks is making sure that their hospitals are there when they need them, making sure that their kids can go to school and not have to wear their winter coat because the heating systems are down. There’s $15 billion in backlog of repairs for schools in our province,” she said.

Slow progress on the Ring of Fire in the James Bay Lowlands.

“…certainly after a decade there should be much, much more accomplished in the Ring of Fire. It was ourselves, the NDP, that started making the commitment that regardless of whether the federal government was at the table or not, we would put the billion dollars on the table to start getting the infrastructure in place to get that Ring of Fire explored and to get those minerals out of the ground and provide all those fantastic jobs for everyone, for the entire northern area,” she said.

“But to have seen 10 long years go by, absolutely unacceptable. Once we made the commitment to put that billion dollars in, then the Liberals…came to the table and said we’re going to put that billion dollars in too, and that was at the last election and here we are four years later and this progress is still very, very slow. It’s disappointing and there’s no need for it.”

Whether she's worried about the party getting lost in the mix

“We’ve been working hard and we’re going to continue to do that, we’re nominating great candidates all around the province, we’ve got an amazing platform that’s not quite finished yet, but well on its when. And you know when people get closer to the election period that’s when they’re going to start engaging in what they want to see for the future and I think New Democrats are really going to offer hope for Ontarians, we’re going to offer opportunity for the future and we’re going to say to folks you don’t have to settle between bad and worse, you can actually do something different this time around,” she said.

The anti-racism directorate and addressing 'systemic issues' on Ontario reserves.

“But there’s also no doubt in my mind that the province needs to be pretty proactive when it comes to anti-racism work and I know that it was New Democrats that forced the Liberals to put together the anti-racism directorate that’s now in place in Ontario and through that directorate we are hoping that we can get some proactive action taking place. But one of the things we know for sure is that on reserves in Ontario in many, many parts of our province, we have young people that are not getting an equitable education, we have over 80 reserves where there still is not clean drinking water for people to utilize and clean water for children to be bathed in, we still have a very inequitable access to healthcare in these communities, and all of these things are unacceptable. We have a housing crisis on many reserves. Some would say these are federal responsibilities, but look, what we’re saying is if the federal government’s not prepared to pick up its socks and deal with some of these systemic issues, if you will, for First Nations' communities then we’ll look at doing that at a provincial level and we’ll send the bill to Ottawa where it belongs. Playing the political football with these communities and with the lives of Indigenous peoples in our province is unacceptable and we’ll never get to reconciliation if we refuse to be truthful about what continues to be problematic on reserve and off reserve,” she said.

Horwath tours Timmins hospital, talks healthcare priorities
Mar 13, 2018 3:03 PM
Comments
We welcome your feedback and encourage you to share your thoughts. We ask that you be respectful of others and their points of view, refrain from personal attacks and stay on topic. To learn about our commenting policies and how we moderate, please read our Community Guidelines.