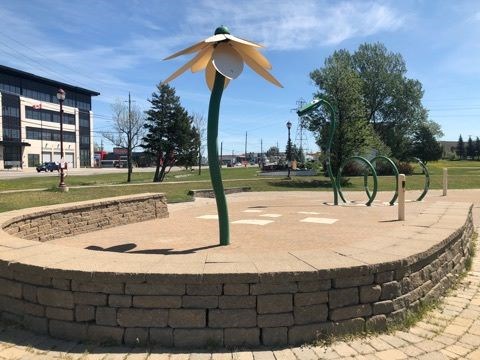 Part of the splash pad area at Hollinger Park in Timmins. Maija Hoggett/TimminsToday

Remediation work at Hollinger Park is moving ahead.

Tuesday, Timmins council approved upgrades to the electrical work and the splash pad area at the popular park. Ken Pye also talked to council about his concerns about some of the activity.

“There is a lot of work underway at the Hollinger Park. We’ve just finished reviewing the drainage plan and with the sloping of the soil and the fill that has to be brought in to cap the contaminated soil below…it appears to us that most of the trees in the Hollinger Park will be saved, we’ll be able to slope away from them effectively and that the concern of clear cutting the entire park is not something that we have to face,” said CAO Dave Landers after the meeting, adding 100 more trees will probably be brought in.

“You might recall at one point the park was ringed with trees and that’s something that people look back to and remember fondly, and that was something we heard from people that they wanted a wide variety of trees in the park as well.”

Upgrading the splash pads will cost more than the $125,000 originally allotted in the 2018 budget.

The project was tendered in May, with one bid coming in “substantially over budget” at $325,050.

As such, the project was broken down into two parts. The soft tile surface was removed from the project and a new RFP was issued.

Two bids were received for the latest round, with Interpaving Ltd. having the lowest at $217,200. The rubberized surface will be tendered next year.

Landers explained the two reasons for the project being split is budgetary concerns and the time of year the work is being done.

He said the workers should be able to manage the connections underground this year.

“But if we’re going to lay down a rubberized pad at this time of the year getting the adhesive to stick effectively, there’s a risk that it just won’t go as well,” he said.

When staff put out the tender it included a new maintenance shed as well. The hope was that combining the projects would reduce the cost.

The lowest bid received from Porcupine Electric was for $320,000. According to the report, staff approached the contractor for a costing and the electrical work cost is $184,000. While the project has been approved, the shed portion has been removed from the work.

With so much work happening at the park, Pye, who is running for the Ward 1 councillor seat, has been vocal about his opposition to some of the activity.

Over the summer he stepped away from organizing Sk8te Hollinger, which he has built and maintained for the past three winters, after controversy arose about trees being cut down at the park.

He talked to council this week about new concerns, mainly about the clay and top soil layers.

If work isn’t done properly, he said the field will end up looking like the cenotaph, which is at the entrance to the park.

“And everybody knows what that cenotaph looks like,” he said. “It’s a sand mound with top soil and it’s all brown and right beside it, it’s green.”

“I’ve been saying for a while now that the soil around the cenotaph and that berm around is the most ridiculous thing we did. It’s full of sand, it’s like a sand dune, and it’s amazing the trees are actually growing there and the grass is always pathetic,” Bamford said.

“It could rain all it wanted, the water goes right through.”

There have also been questions about the fill being hauled into the park.

“A lot of soil has been brought into the park right now, it has all been tested and tested positively. We’ll release those results to the public shortly, but we’re also going to have a third party review it as well because some people have some real concerns about the soil,” Landers said.