Frost bringing his filth to Timmins

Veteran comedian talks dirty comedy, Russell Peters, drunk audiences, and the Canadian city that gives him the most problems

Darren Frost says his comedy career has been '26 long years' of blood, sweat, and beers. It has provided him the opportunity to perform on stages near and far, and appear in cinematic scenes with no-name actors such as John Travolta and Michael Douglas. It wasn't a path he 'fell into'. He decided at an early age it was something he wanted to dedicate his life to.

"I always wanted to be a stand-up comic, so I made a deal with my parents. I went to business school for something to fall back on, and then the second I graduated I started doing stand-up comedy. Actually, I did it during university as well, but in terms of turning pro, I had a day job for a number of years. In '93 or '94 is when I went full time. I haven't had a day job since like '96"

The Brantford, Ontario native has seen a lot in his 26 year career. He's toured across Canada, the United States, and had a cup of coffee in Europe. He has performed at Just For Laughs. He had a recurring role on the hit CBC comedy Mr. D as an angry French teacher. He also worked with Academy Award winner Nicolas Cage in the 2015 horror film Pay The Ghost.

But more importantly, he has been to the 'City with the Heart of Gold' before, although he didn't perform stand-up.

"I did shows for a government program, teaching kids about credit, and Visas, and all that stuff."

Kenny Robinson, whom Frost 'goes way back' with, performed at the Timmins Comedy Festival in 2016. The two have been teamed up on a very dirty cross country comedy tour called 'Rank and Vile' for the past few years. Robinson told Frost great things about the festival and encouraged him to get on board.

"I just want to go to a city that wants the kind of comedy we do. I'm not picky. When people ask me what's my favourite city in Canada, there is no favourite, just give me a bunch of people that want dirty comedy, and want to pay for it. I don't care if that's Timmins, Toronto, Vancouver, it doesn't matter to me. I just want people to have a good time and enjoy what we do," said Frost.

One bit that has become a Darren Frost trademark, is speaking to an audience member named 'F*cky'.

"It happened once. Then I did it again, and people loved it. That's how normally things happen, pretty organically. It's not like I went out one day and thought 'I'm just gonna call him this' it just kind of happens, and then it grows into this 'thing.' Believe it or not, I still get people coming up to me saying 'I saw you 10 years ago, I was F*cky, it was great' and people have come to my shows with the T-shirt - 'I was F*cky!' and it kind of grows into itself. For a long time I didn't do it. I've been doing it again recently, because you kind of get tired of doing the same thing. The reason we get into comedy and not rock n' roll is to not have to play Stairway to Heaven every night. I get to do whatever I want. On any given day, you never know what's going to happen," said Frost.

Heckling is a constant nuisance of stand-up comedians, and Frost is no exception. In January of 2008, while performing at Yuk Yuk's in London, Ontario, an apparently offended man threw a glass at Frost, striking him in the chest.

"Anytime you do comedy in a club or bar, people are drinking. The whole purpose is they're going to drink and have a good time, and that's great, but there is a line where it goes past a good time. They get too intoxicated and then things escalate into heckling and yelling. The thing is, everyone thinks they're going to beat a comedian. I've been doing this for 26 years. You're never going to say something to me that I haven't heard before. Ever."

Frost said that overconfident drunks often try to score laughs with their friends by getting into a 'word fight' with him.

He said there have been other instances of hecklers in the southwestern Ontario city, including one where an audience member demanded that Frost talk about his battle with skin cancer.

"So whenever I have problems, its always in London, Ontario."

His material is derived from many sources. From news headlines, to stories about his kids.

"I'm the father of three boys, which people find interesting because I'm the 'angry comic' with three young boys, trying to be a dad in the world today. People appreciate it. I used to do a lot more from the headlines, but people just get a lot angrier about that because of the kind of world we live in now. So I find if I make fun of my kids more, they don't get so upset because its my kids, and not the news."

Frost has three different flavours of his routine - Clean, R-Rated, and X-Rated.

"What do I want to do? I want to do the more dirtier, edgier stuff with no rules. It's not like I wake up every day and scream 'F**k' you know, but I just want to do what I want to do."

He has done a lot of 'clean comedy' as well, having appeared on televised galas, Just for Laughs, and the Winnipeg and Halifax comedy festivals, where performers can't get too dirty. But he says its not what he does best.

"I can always water it down and sell it for TV consumption, but what I do is live comedy in a bar, to a bunch of people who want to hear that kind of thing."

Frost said he has never met Timmins Comedy Festival baron Rick Lemieux, but has heard good things through his comedy friends, including his charitable work.

"I don't know him personally, but he definitely has a very solid reputation. In comedy and show business in Canada, the longer you're in it, the more you tend to gravitate towards people trying to do good things. There's enough douchebags in this business who you don't want to be around. There's a lot of people who will say one thing and do another, and to have a good name in this business is hard to come by." 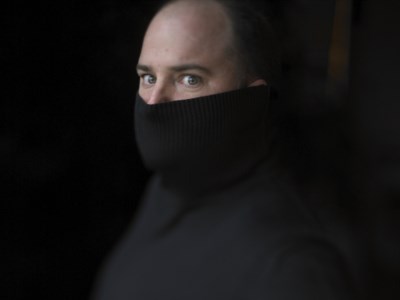 Frost promises to not hold anything back in his show at the Timmins Comedy Festival. Photo by David Leyes

He has a simple bit of advice for aspiring comedians.

"Just get on stage as many times as possible, and especially in the beginning, don't let anyone try to hold you back from doing what you want to do. The number one key is stage time. Writing and stage time. There's no shortcut. If you look at anyone who's a big star, they're generally in their 40s for a reason. They've had life experience, they've had a lot of years dedicated to the craft of comedy. Most comics don't think you even have a voice until you're 10 years in. That's not always the case, there are a few exceptions, but for the most part, the superstars have been doing it at least 20 years."

"The Russell Peters of the world, who many people think was an overnight sensation, I used to do gigs with Russell for chicken wings like 20 years ago. He was not an overnight sensation. He dug it out, worked really hard, at the crappy gigs and crappy ends of show business, to come up with an act that was ready once the light shined on him, and he was ready to go. That's the way it is. There's no such thing as luck, you just need to be prepared."

Frost said his favourites growing up were Woody Allen, Emo Philips, and the late Sam Kinison.

"Which is an odd three to choose, but those are the three that were heavy influences on me. Kinison obviously had the anger thing, Woody Allen was a great writer and storyteller, and Emo brought the short, punchy joke that you didn't see coming. Which is not easy to do without people rolling their eyes, and I've seen thousands of people try to do it."

He has two pieces of advice for anyone who is considering attending the festival.

"Anyone can come, even your grandmother, if she's into Black Sabbath and gin. Also make sure you Google a couple of clips, so you know what you're getting. Any comedian. Google them, watch a couple clips, or read a couple articles. Comedy is the one art form where people don't really do a lot of research. There's so many different kinds of comedy. Make sure you see what you want to see."

Darren Frost will be performing on Saturday, Apr. 1 at Club 147. Tickets for all Timmins Comedy Festival shows can be purchased at Altered Reality on Third Avenue. Tickets for Frost's show cost $20.

Dreading a mortgage payment increase when you renew? There are ways to find a better rate