Firefighters aim to hose down Doctors

One team resorting to ringers for Sunday's charity hockey showdown, while silent auction has numerous big ticket items up for grabs
Apr 9, 2016 11:41 AM By: Andrew Autio, freelance 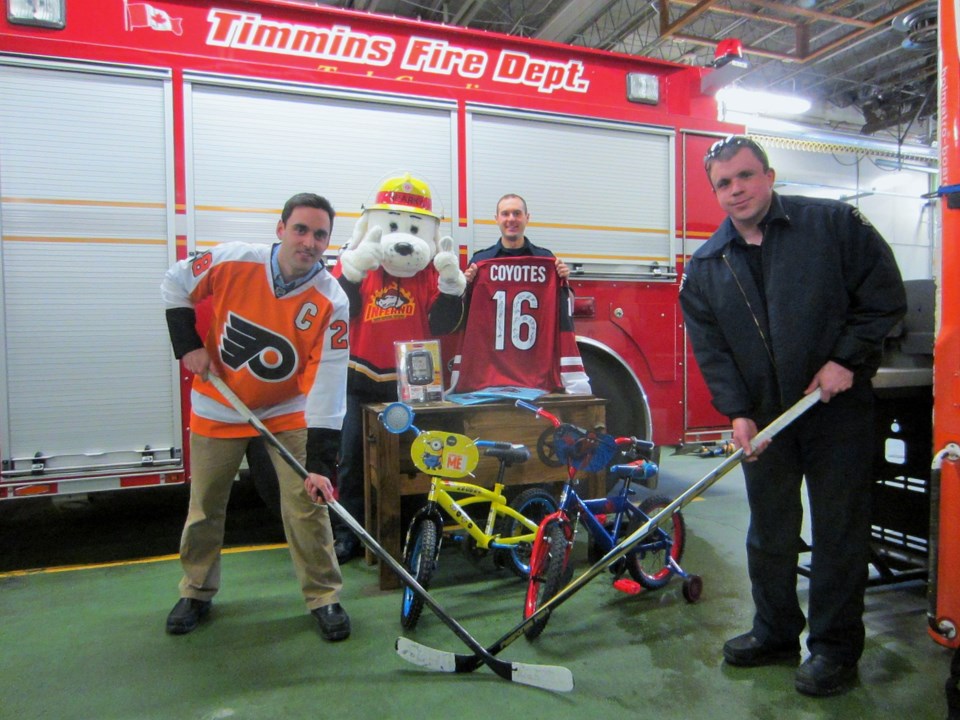 With less than 48 hours until puck drop, gamesmanship is ramping up ahead of a charity hockey game.

The game is in support of Owen Fodchuk and Jade Collins, two local children who are battling serious illnesses, and their families.

"This year, we're doing things a little different, we'll have two families this year, as there was an evident need in the community," said firefighter and Inferno sniper Travis Tulloch.

It has been a few years since the firefighters have hosted a charity game, but they often get a tremendous response from the city with a heart of gold.

The Inferno are feeling confident ahead of the contest, and why not, they claim to have a 9-0 record in charity matches.

"This is the first time we're playing the doctors, but we are going in undefeated against our previous competitors. We've played the Timmins Media Cheapskates in the past, and the police one year, and we're looking forward to it," said Tulloch.

The impressive record has not gone unnoticed. Code Blue has boldly stated their team will have some special reinforcements in an attempt to give the firefighters a taste of defeat.

"The doctors have told us they're bringing in a couple of ringers. They're keeping it hush-hush though. Our team is strictly firefighters, we don't have to resort to bringing in ringers, so we're looking forward to defeating them fair and square," said Tulloch.

Perhaps as equally exciting as the game itself will be the silent auction taking place at the same time. Tulloch is very happy with the generosity and community support shown by the people of Timmins.

"We've had lot of items donated by located businesses, as well as individuals. Prizes continue to pour in right now, so there will be a lot of good items up for grabs," he said.

100 percent of the proceeds go directly to the families. There is no shortage of enticing items to bid on.

An authentic Claude Giroux Philadelphia Flyers jersey, as well as an Arizona Coyotes sweater signed by many players, including Max Domi are up for auction.

A pair of tricked out kids bicycles are also up for grabs, one of them has a Spiderman theme, and the other one features the Minions and has sound effects.

Tickets for the game are $5 and can be purchased at the fire station on Cedar Street South, or at the arena doors on Sunday.

The pre-game ceremony will start at 6 p.m. and will feature representatives from each family. The game will begin at approximately 6:30 p.m. Sparky the Fire Dog will be there to entertain the crowd.

For anyone wishing to help Owen and Jade, but are unable to make it to the game and auction can go to www.gofundme.com/jadeandowen

Hockey charity game for two Timmins children pits the Firefighters vs. the Doctors
Mar 17, 2016 7:38 PM
Comments
We welcome your feedback and encourage you to share your thoughts. We ask that you be respectful of others and their points of view, refrain from personal attacks and stay on topic. To learn about our commenting policies and how we moderate, please read our Community Guidelines.