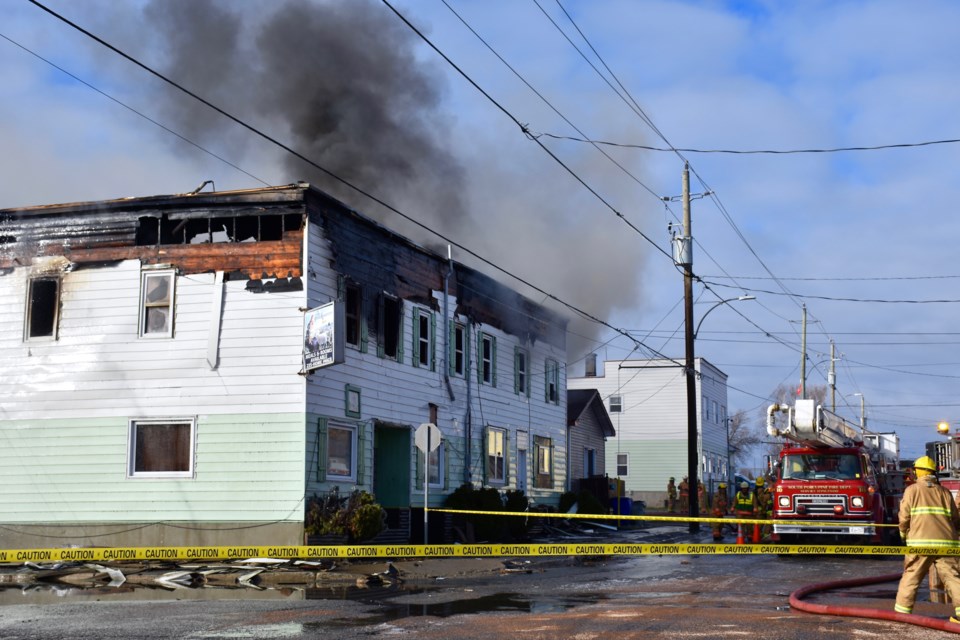 Black smoke could still be seen coming from the Good Samaritan Homeless Shelter in South Porcupine six hours after the fire was reported. Maija Hoggett/TimminsToday

An early-morning fire at a homeless shelter really highlights the need for a system in the city, according to the Homeless Coalition of Timmins chair.

Just before 4 a.m., emergency crews were called to a fire at the Good Samaritan Inn Homeless Shelter in South Porcupine.

According to the Timmins Fire Department, the blaze started on the second floor. One resident was rescued by paramedics, with firefighters rescuing a second person from the fire.

The other people in the shelter at the time were brought to the Senator Hotel.

“If we had a proper homeless-serving system for our community, a crisis like this wouldn’t be that big of a deal,” Jason Sereda, Homeless Coalition of Timmins co-founder and chair. “And I don’t mean to minimize it, but it is 14 beds in a rooming house and a healthy, comprehensive system should be able to absorb the loss of 14 beds. But it’s because we don’t have emergency shelters, we don’t have affordable housing, we don’t have transitional units, that’s why now it’s going to be that much harder for the existing programs to pick up the slack.”

Living Space, which recently celebrated its grand opening, offers an emergency shelter at its Cedar Street North space and also has transitional units on the top floor that haven’t been opened yet.

“To my understanding, CDSSAB (Cochrane District Social Services Administration Board) and the Living Space committee are working to get those people into those rooms, but they haven’t worked out the details yet,” said Sereda.

As news of the fire spreads, there has been an outpouring of support from the community.

“I’m really pleased with how the community has kind of rallied together with donations of clothing, bedding, cash donations, food donations,” he said.

Metro at the South Porcupine Mall is doing accepting donations of items such as blankets, clothes, food, toilet paper, and hygiene items.

Donations of new sheets, blankets, pillow cases and pillows for a twin bed are also being accepted at Living Space.

“And then we have staff from the Canadian Mental Health Association over at Living Space operating a drop in for people who are affected, but also to accept any donations from the community. I’m really, really happy to see everybody pull together, it kind of shows the strength of the Homeless Coalition of Timmins and all our members, but also the community as a whole,” he said.

The most effective way to help out is through cash donations to Living Space or one of the other groups, said Sereda.

“Donations are nice, but it can be problematic when we get an influx of lots of clothes that we then have to wash and prepare and we don’t even know if they’re the right size for people. Cash donations are always the best because then we can go out and individually buy what people need and customize it to the actual individuals,” he said.

At this point, the cause of the fire is not known.

According to Timmins Police, its criminal investigations division has been deployed to help determine the origin of the fire.

"They are in the preliminary stages of their investigation and are working in consultation with the Fire Marshall's Office," reads a statement from police.

More photos and information on the fire are available here.

UPDATED: Two taken to hospital after fire at homeless shelter (11 photos)
Oct 24, 2018 6:35 AM
Comments
We welcome your feedback and encourage you to share your thoughts on this story. We ask that you be respectful of others and their points of view, refrain from personal attacks and stay on topic. To learn about our commenting policies and how we moderate, please read our Community Guidelines.