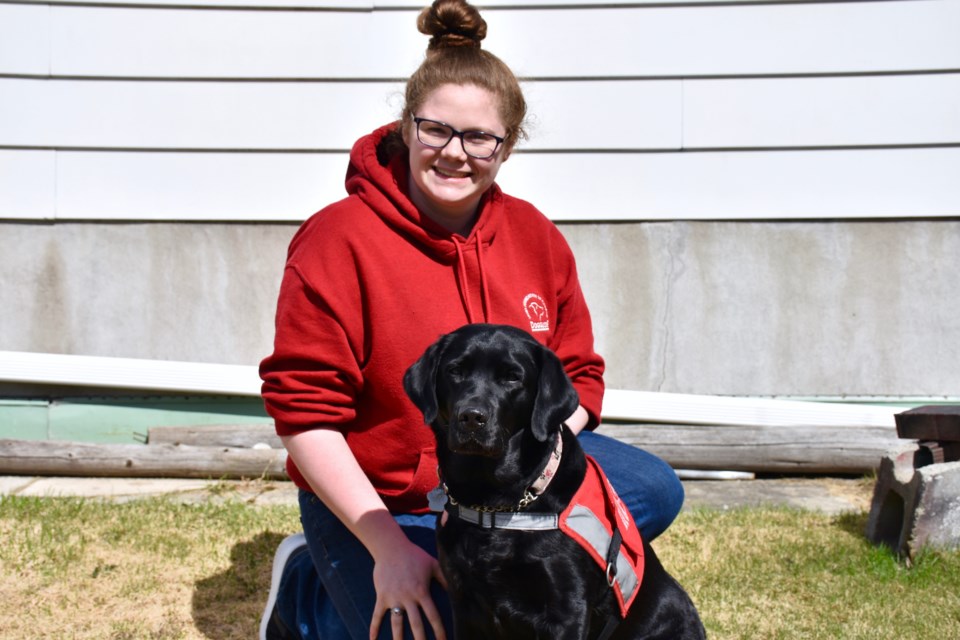 Peggy, a soon-to-be four-year-old black lab, has given Alyssa Godin the confidence to live alone.

After moving out on her own, she slept through two fire alarms at her university residence.

That prompted a conversation on how to prevent it from happening again and one of the suggestions was a dog guide.

“My first reaction was, well I’m not really blind,” she recalled.

That's when she learned about the Lions Foundation, which trains dogs for vision, hearing, seizure response, service, support, autism assistance and diabetic alert.

She ended up applying for a dog and being matched with Peggy.

Living an active lifestyle at university and travelling with the sports teams she’s on, Godin said it was Peggy’s energy that led to the partnership.

“She’s just as energetic and bubbly as me. She loves going to new places, loves when her vest comes off getting to meet people, she’s not shy...very confident too, not scared of anything. She makes my life easy,” she said.

While her family moved away when she was young, she spends the summers here.

She was in Grade 9 when her parents noticed her hearing loss.

In the past five years the hearing loss has plateaued.

“It’s kind of progressive, we think it’s from the string of concussions that I had because it happened directly after that and there’s no other reason. They haven’t been able to find any problems with my outer ear, so it’s definitely an inner ear problem,” she explained.

“By the time I started university, I had severe hearing loss so I had hearing aids. I have to lip read people...even with my hearing aids if I was to close my eyes, I can’t get clear words, I get mumbles.”

The first six months at university were horrible, she said.

She would miss out if friends were going out because she couldn’t hear them at the door. If she was alone, she’d wonder how she’d wake up in the morning or know if there’s a fire.

Her life changed with Peggy.

The energetic pup wakes up Godin every morning.

If Godin’s back is turned and someone calls her, if someone is at the door, or the fire alarm is going off — Peggy lets her know.

“The biggest thing is probably the independence that it’s given me,” she said.

Peggy has been everywhere from hospitals to school visits, and has her own seat on the varsity lacrosse team bus.

It takes about $25,000 to train and place each dog, which is provided at no cost to eligible Canadians.

This weekend is the Walk for Dog Guides to raise cash for the foundation to train and place dogs.

There isn’t a walk in Timmins, but you can make a general donation online here.

Godin was also at the Timmins Square last week to spread awareness about the program.

BEYOND LOCAL: Strategies for successful transition in a family business
May 15, 2021 8:55 PM