Does an amphitheater make sense?

Southern portion of Hollinger Park could be turned into permanent concert venue
0
Jan 31, 2018 8:19 PM By: Andrew Autio, freelance
Previous Next
1 / 1 The southwest corner of Hollinger Park, where the stage for Stars and Thunder was situated, could potentially see a permanent amphitheater built if city council ultimately goes that route. Andrew Autio for TimminsToday
Expand
Previous Next

A new vision for the city's historic Hollinger Park includes many interesting features, including a proposal to build a permanent outdoor amphitheatre in the southwest corner.

At this week's council meeting, a presentation by representatives from Dillon Consulting showed several concepts and potential options to include in a re-design of the centrally located park. Considering the soil remediation efforts that are required to take place in the park, the time is now to decide what the next era of Hollinger Park will look like.

"Rather than simply placing fill over the entire park and doing a basic lot grading and drainage plan, we thought there was an opportunity to look at re-designing the park to meet the current needs and aspirations of our community," said Mark Jensen, the city's Director of Community and Development Services in his introduction to the presentation.

The consultants and city staff are hoping to identify the desired components as soon as possible, so a proper cost estimate can be produced. There would likely be a 'five year plan' for the project.

"Its important that we do make a decision in the near future, likely not this evening, but hopefully by our next meeting (Feb. 6) because we do have to start planning the soil remediation part," said Jensen.

Outlined in the report were a long list of 'requests' and feedback the consultants have received through various channels, including a public open house session the City of Timmins hosted in October of 2015.

Among those listed were:

With that in mind, two 'options' for the southern half of the park were included in the report with some preliminary drawings. Both options include an amphitheatre, albeit two different sizes.

Located in the southwest corner, approximately where the stage was located during the Stars and Thunder festival, a permanent stage would be built. It would include a 'backstage' parking and loading area. For spectators, a sloping, tiered seating area would be landscaped into the field, with stone seat walls. One estimate states approximately 5,000 spectators could be seated in one of the concepts.

The consultants said there was 'clearly a need for an event space' and an amphitheatre would obviously have a big impact on outdoor music events in the city for years to come, including possible future editions of the city-run Stars and Thunder festival, as well as concerts hosted by the Timmins Festivals and Events Committee. 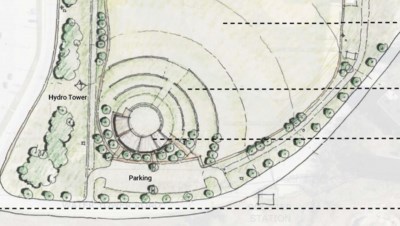 This amphitheater design is one of the options presented by Dillon Consulting this week at city hall.

"An amphitheatre would have a big impact on our organization," TFEC Chair John Olaveson told TimminsToday on Wednesday.

He sees the possibility for a potential partnership with the city, and is hoping that TFEC will get to provide some input into such a decision.

"I know this is very preliminary, but if they are going to build something like this, we would hope it would be big enough to house large acts. I really don't think we need another pavilion. We have two already," said Olaveson.

It was mentioned by Mayor Steve Black during Monday's meeting that in just two years, TFEC's 'Rock On The River' concert has become so popular, that it is perhaps outgrowing its current venue at Participark in Mountjoy. Olaveson doesn't disagree.

"We are bringing the biggest stage to Participark this year. Bigger than anything RibFest, the Great Canadian Kayak Challenge, or Rock On The River has ever brought in. Its just a matter of time before we outgrow that park," he said.

It is perhaps a 'go big or go home' scenario. If it is too small for major artists to play in, is it worth it? Rental stages would still have to be trucked in for big concerts, and would only serve to complicate festival site plans. On the other hand, nobody wants to see a 'white elephant' scenario where a big venue is only used a few days out of the year.

"It doesn't make sense to build an amphitheatre we can't use. Can they make it expandable? I'm not sure. But I think TFEC should have a huge voice when considering building something like this. I think the Mayor would agree," said Olaveson.

The Grace Hartman amphitheatre in Sudbury is a well-used outdoor concert venue which could be used as comparative to what the Dillon consultants are envisioning.

Some members of council had difficulties understanding how the amphitheatre would be built in the first place, as there isn't a natural slope to the ground in that area, as is often the case in outdoor amphitheatres. There were also concerns about drainage during times of high precipitation, however the consultants assured those would be explained in greater detail in a more comprehensive plan. They also added it could be constructed with a less steep slope than they likely imagined.

Hollinger Park re-design plans are all but certain to be included on the Feb. 6 agenda.