Council opts to go with sole-sourced promoter for $3.5 million festival

It was the lunch hour, there were sandwiches present, but it was a sole-sourced deal that had two Councillors smelling baloney regarding the city's plan to host an eight-day fireworks and music festival next summer.

Due to provincial legal proceedings taking place in the second floor chambers, a council meeting was held in a basement boardroom on Thursday. The purpose of the meeting was to formally enter a co-promotion agreement with a sole proprietorship called 'Word Travels Fast Consulting'.

That organization's head is Keith Sharp, a rock journalist and music industry liaison.

Council needed to vote this week as it was 'time sensitive issue' as described by city CAO Joe Torlone.

Before the city can announce any performers or begin getting tickets printed, the deals must be finalized between the promoters and the performers themselves.

The services that Word Travels Fast Consulting is now obligated to provide to the city in connection with the festival are:

However, a clause within the agreement states that the consulting company acknowledges that Timmins shall have the right to provide the above mentioned services for its own account, or with other promoters, consultants, professionals, and advisors.

Essentially nothing is exclusive.

Mayor Steve Black said the city received this agreement back from lawyers on Monday afternoon, and the matter nearly made its way onto that evening's meeting agenda, but there was insufficient time to prepare. He also addressed Councillor Rick Dubeau's harsh criticism of the sole-sourced nature of the agreement.

"The City of Timmins has the right to sole-source contracts when there's a need or desire to go that route," he said, and added that the city's bylaw states that if a contract is going to be sole-sourced, it must be then voted on at a council meeting.

On Thursday, Dubeau asked Black if the city approached any other music promotion companies.

"No. As I said when we started this process, this group and the fireworks company (David Whysall Fireworks Ltd) approached us. It was their concept for the festival. They had some of the performers that we were interested in, that they were working with. Council gave us direction to try and pursue that one, it didn't work out. But that's how our relationship started with this company," said Black.

"In the future, you could put out an RFP(Request for Proposal) if timing provided, and try and bring in any of these type of people you wanted, but given that it was their idea that they came with the proposal to us for, I think we want to get tickets on sale for Christmas, we decided to proceed as per discussions that we've had so far in trying to secure the lineup" he added.

Dubeau was not impressed with the explanation. 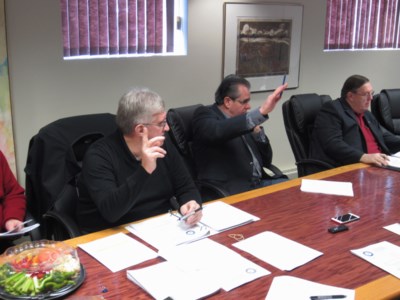 Councillors Joe Campbell and Rick Dubeau were the lone votes opposing the city entering into the sole-sourced agreement. Andrew Autio for TimminsToday

"I just think its a bad practice, sole-sourcing these things, and my comments are on the record" he said.

Councillor Joe Campbell asked if the promoter had any previous dealings with the city. It was confirmed by Black that Sharp has been involved in booking acts for the Great Canadian Kayak Challenge, including this year's event which saw throwback rockers Honeymoon Suite and Helix perform at Participark.

When the voting occurred, unsurprisingly all Councillors voted in favour of entering into the agreement with the exception of Dubeau and Campbell.

There are no official polls as to the public's reception of the entire $3.5 million, eight-day festival as of yet.

Wild numbers have been thrown out by many. That continued at Thursday's meeting, when both Campbell and Dubeau claimed that the vast majority of residents they've spoken with were strongly opposed to the city's bold use of taxpayer funds, while Councillor Noella Rinaldo said the exact opposite.

How pandemic stress created new opportunities for this fishing lodge